Q. 1. List conditions under which combustion can take place.
Ans. Conditions necessary for combustion are:
(i) Presence of a combustible substance.
(ii) Attainment of ignition temperature.
(iii) Proper supply of air to provide oxygen.

Q. 5. Give reasons:
(a) Water is not used to control fires involving electrical equipment.
(b) LPG is a better domestic fuel than wood.
(c) Paper by itself catches fire easily whereas a piece of paper wrapped around an aluminium pipe does not.
Ans. (a) Water is a good conductor of electricity. It conducts electricity and may result electric shock.
(b) LPG has more calorific value and produces no pollution. So it is better domestic fuel than wood.
(c) The ignition temperature of paper is less, so it catches fire easily. It does not catch fire when wrapped around aluminium pipe because aluminium absorbs the heat, so paper does not attain its ignition temperature.

Q. 6. Make a labelled diagram of a candle flame.
Ans. 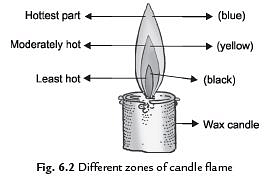 Q. 7. Name the unit in which the calorific value of a fuel is expressed.
Ans. kilojoule per kg (kJ/kg)

Q. 8. Explain how CO2 is able to control fires.
Ans. (i) CO2 forms a blanket around fire due to which supply of air is stopped.
(ii) CO2 also brings down the temperature of the fuel.