Question 1: Look at the diagram showing the positive feedback mechanism on page 13. Can you list the inputs that went into tool making? What were the processes that were strengthened by tool-making? 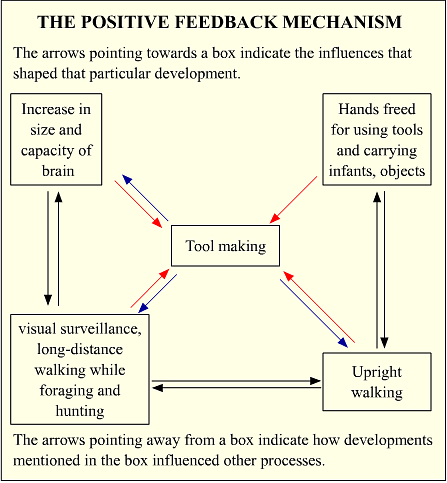 Considering the red-colored lines, we have enlisted (below) the inputs that facilitated the tool-making process.

Now, let us consider the blue-colored lines.The processes that were strengthened by tool-making are mentioned below.

Besides the aforementioned similarities, both humans and primates have considerable differences in their behavior and anatomy.

Question 3: Discuss the arguments advanced in favor of the regional continuity model of human origins. Do you think it provides a convincing explanation of the archaeological evidence? Give reasons for your answer.Answer: Two different views have been expounded regarding human origins:

Question 4: Which of the following do you think is best documented in the archaeological record: (a) gathering, (b) tool making, (c) the use of fire?Answer:  The technique of tool making is best documented in archaeological records. The earliest evidence of making and using stone tools comes from the archaeological sites in Ethiopia and Kenya.  The remains of various types of tools found after excavations prove that man had mastered the skill of tool making. Moreover, according to the need of the time, the shape and size of the tools were also changed.

Question 5: Discuss the extent to which (a) hunting and (b) constructing shelters would have been facilitated by the use of language. What other modes of communication could have been used for these activities?

Answer: Early man was a food gatherer and scavenger. These were more of an individual’s activities. With homo- Erectus social groups because larger and man matured from being a scavenger to hunting.Hunting activities of humans

Construction of shelters by human beings

Question 6: Choose any two developments each from Timelines 1 and 2 at the end of the chapter and indicate why you think these are significant.Answer:

1. Earliest stone tools: The making of the earliest stone tools is significant as it marked the initial phase of technological innovation. As the early man started making tools, executing daily tasks such as hunting and construction got easier. Simultaneously, he started crafting tools to suit farming needs. Farming provided a comparatively secure and stable source of food. This allowed early man to give up his nomadic life and settle down in one place. It can thus be rightly stated that the making of the earliest tools marked the beginning of the initial phase of human civilizations.