Q.1: How does the force of gravitation between two objects change when the distance between them is reduced to half?

Ans: According to the law of gravitation, the force of attraction acting between two bodies is given by,

From the above equations we can see that F α m, although g (acceleration due to gravity) does not depend on m. Hence, all bodies fall with the same acceleration provided there is no air or other resistance.
Q.3: What is the magnitude of the gravitational force between the earth and a 1 kg object on its surface? (Mass of the earth = 6 x 1024 kg and radius of the earth is 6.4 x 106 m)
Ans: Given that,
Mass of the body (m) = 1 kg
Mass of the Earth (M) = 6 x 1024 kg
Radius of the earth (R) = 6.4 x 106 m
Now magnitude of the gravitational force (F) between the earth and the body can be given as,

Where M1 = Mass (earth), M2 = Mass (moon), d = Distance between earth and moon. The magnitude of force (F) is same for earth and moon.
Q.5: If the moon attracts the earth, why does the earth not move towards the moon?

Q.6: What happens to the force between two objects, if

(i) the mass of one object is doubled?
(ii) the distance between the objects is doubled and tripled?
(iii) the masses of both objects are doubled?
Ans:
(i) When the mass of either body is doubled, the force is also doubled as per the following equation:

(ii) When the distance between the objects is doubled, the force becomes one fourth of the original force as per the following equation:

Similarly it can be shown that when the distance between the objects is tripled, the force becomes one ninth of the original force.
(iii) In the same way as given in the answer (i) above this can be shown that when the masses of both bodies are doubled, the force becomes four times the original force.
Q.7: What is the importance of Universal Law of Gravitation?
Ans: There are many importance of Universal Law of Gravitation as with the help of this law we can explain natural phenomena such as,
1. the force of attraction that binds us to the earth,
2. the motion of planets moving around the sun,
3. the motion of moon around the earth
4. the occurring of tides due to sun and moon.
Q.8: What is the acceleration of free fall?
Ans: It is the acceleration produced when a body falls under the influence of the force of gravitation of the earth alone. On the surface of the earth its value is 9.8 m/s2.
Q.9: What do we call the gravitational force between the earth and an object?

Ans: Weight of that object.

Q.10: Amit buys few grams of gold at poles as per the instruction of one of his friends. He hands over the same when he meets him at equator. Will the friend agree with the weight of gold bought? If not, why?
Ans: His friend won’t agree with the weight of gold bought. Since the value of g is less at the equator than that at the poles so, the same gold weighed at the poles will measure less when taken to equator.
Q.11: Why will a sheet of paper fall slower than one that is crumpled into a ball?
Ans: Because the sheet of paper will experience larger air resistance due to its larger surface area than its surface area in ball form. Hence, a sheet of paper falls slower than one that is crumpled into a ball.
.13: A ball is thrown vertically upwards with a velocity of 49 m/s. Calculate
(i) the maximum height to which it rises,
(ii) the total time it takes to return to the surface of the earth.
Ans: 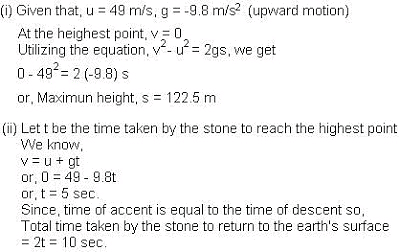 Q.17: A stone is allowed to fall from the top of a tower 100 m high and at the same time another stone is projected vertically upwards from the ground with a velocity of 25 m/s. Calculate when and where the two stones will meet?
Ans: 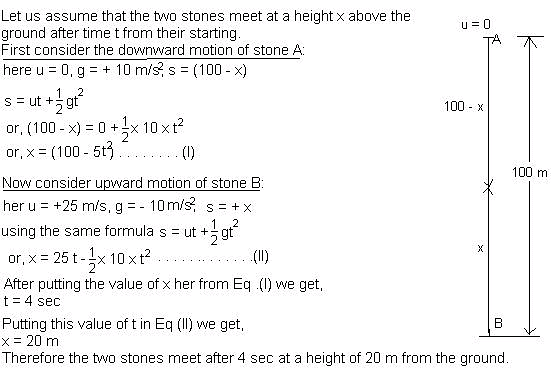 Q.20: Why does a block of plastic released under water come up to the surface of water?

Ans: It is because the upthrust or the buoyant force exerted by the water brings the plastic block to the surface of water.

Q.22: The volume of a 50 gm sealed packet is 350 cm3. Will the packet float or sink in water if the density of water is 1 g/cm3 ? What will be the mass of the water displaced by this packet ?