The document NCERT Solutions: Human Health & Disease Notes | Study Biology Class 12 - NEET is a part of the NEET Course Biology Class 12.
All you need of NEET at this link: NEET

Q.1. What are the various public health measures, which you would suggest as safeguard against infectious diseases?Ans. Public health measures are preventive measures which are taken to check the spread of various infectious diseases. These measures should be taken to reduce the contact with infectious agents. Some of these methods are:(i) Maintenance of personal and public hygiene: It is one of the most important methods of preventing infectious diseases. This measure includes maintaining a clean body, consumption of healthy and nutritious food, drinking clean water, etc. Public hygienic includes proper disposal of waste material, excreta, periodic cleaning, and disinfection of water reservoirs. 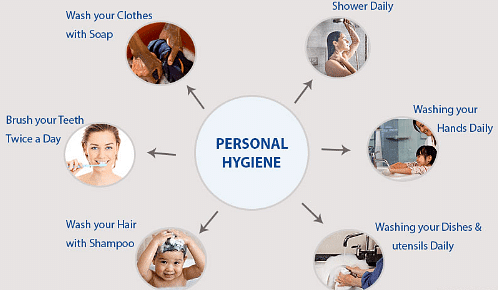 (ii) Isolation: To prevent the spread of air-borne diseases such as pneumonia, chicken pox, tuberculosis, etc., it is essential to keep the infected person in isolation to reduce the chances of spreading these diseases.(iii) Vaccination: Vaccination is the protection of the body from communicable diseases by administering some agent that mimics the microbe inside the body. It helps in providing passive immunization to the body. Several vaccines are available against many diseases such as tetanus, polio, measles, mumps, etc.(iv) Vector Eradication: Various diseases such as malaria, filariasis, dengue, and chikungunya spread through vectors. Thus, these diseases can be prevented by providing a clean environment and by preventing the breeding of mosquitoes. This can be achieved by not allowing water to stagnate around residential areas. Also, measures like regular cleaning of coolers, use of mosquito nets and insecticides such as malathion in drains, ponds, etc. can be undertaken to ensure a healthy environment. Introducing fish such as Gambusia in ponds also controls the breeding of mosquito larvae in stagnant water.Q.2. In which way has the study of biology helped us to control infectious diseases?Ans. Various advancements that have occurred in the field of biology have helped us gain a better understanding to fight against various infectious diseases. Biology has helped us study the life cycle of various parasites, pathogens, and vectors along with the modes of transmission of various diseases and the measures for controlling them. 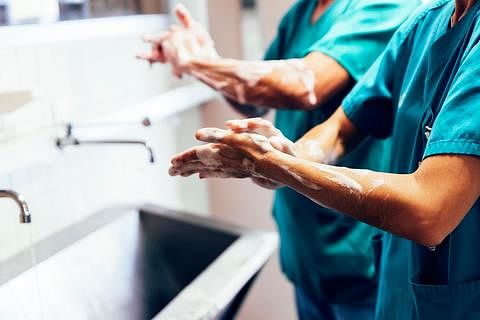 Vaccination programmes against several infectious diseases such as small pox, chicken pox, tuberculosis, etc. have helped eradicate these diseases. Biotechnology has helped in the preparation of newer and safer drugs and vaccines. Antibiotics have also played an important role in treating infectious diseases.Q.3. How does the transmission of each of the following diseases take place?(a) Amoebiasis(b) Malaria(c) Ascariasis(d) PneumoniaAns.

Q.4. What measure would you take to prevent water-borne diseases?Ans. Water-borne diseases such as cholera, typhoid, hepatitis B, etc. spread ­­ by drinking contaminated water. These water-borne diseases can be prevented by ensuring proper disposal of sewage, excreta, periodic cleaning. Also, measures such as disinfecting community water reservoirs, boiling drinking water, etc. should be observed.Q.5. Discuss with your teacher what does ‘a suitable gene’ means, in the context of DNA vaccines.Ans. A ‘suitable gene’ refers to a specific DNA segment which can be injected into the cells of the host body to produce specific proteins. This protein kills the specific disease-causing organism in the host body and provides immunity.Q.6. Name the primary and secondary lymphoid organs.Ans. (a) Primary lymphoid organs include the bone marrow and the thymus.(b) Secondary lymphoid organs are the spleen, lymph nodes, tonsils, Peyer’s patches of small intestine, and appendix. 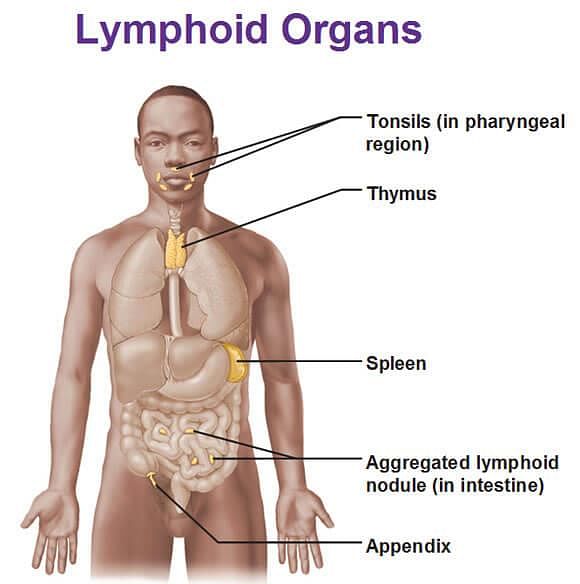 (b) Active and passive immunity

Q.9. Draw a well-labelled diagram of an antibody molecule.Ans. 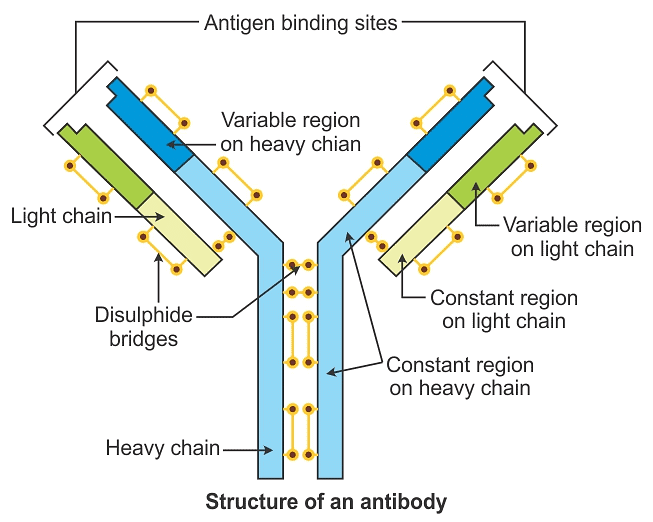 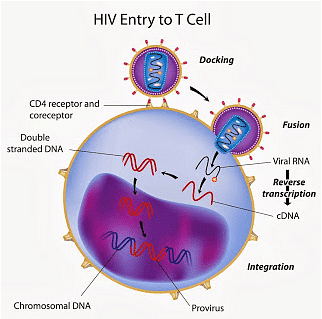 AIDS virus entering into cellThen, this viral DNA incorporates into the host DNA and directs the synthesis of virus particles. At the same time, HIV enters helper T- lymphocytes. It replicates and produces viral progeny there. These newly formed progeny viruses get released into the blood, attacking other healthy helper T-lymphocytes in the body. As a result, the number of T-lymphocytes in the body of an infected person decreases progressively, thereby decreasing the immunity of a person.Q.12.How is a cancerous cell different from a normal cell?Ans.

Q.13. Explain what is meant by metastasis.Ans. The property of metastasis is exhibited by malignant tumors. It is the pathological process of spreading cancerous cells to the different parts of the body. These cells divide uncontrollably, forming a mass of cells called tumor. From the tumor, some cells get sloughed off and enter into the blood stream. From the blood stream, these cells reach distant parts of the body and therefore, initiate the formation of new tumors by dividing actively.Q.14. List the harmful effects caused by alcohol/drug abuse.Ans. Alcohol and drugs have several adverse effects on the individual, his family, and the society.A. Effects of alcohol:Effects on the individual: Alcohol has an adverse effect on the body of an individual. When an individual consumes excess alcohol, it causes damage to the liver and the nervous system. As a result, other symptoms such as depression, fatigue, aggression, loss of weight and appetite may also be observed in the individual. Sometimes, extreme levels of alcohol consumption may also lead to heart failure, resulting coma and death. Also, it is advisable for pregnant women to avoid alcohol as it may inhibit normal growth of the baby.Effects on the family: Consumption of excess alcohol by any family member can have devastating effects on the family. It leads to several domestic problems such as quarrels, frustrations, insecurity, etc.Effects on the society:(a) Rash behavior(b) Malicious mischief and violence(c) Deteriorating social network(d) Loss of interest in social and other activities

B. Effects of drugs: An individual who is addicted to drugs creates problems not only for himself but also for his family.Effects on the individual: Drugs have an adverse effect on the central nervous system of an individual. This leads to the malfunctioning of several other organs of the body such as the kidney, liver, etc. The spread of HIV is most common in these individuals as they share common needles while injecting drugs in their body. Drugs have long-term side effects on both males and females. These side effects include increased aggressiveness, mood swings, and depressionEffects on the family and society: A person addicted to drugs creates problems for his family and society. A person dependant on drugs becomes frustrated, irritated, and anti-social.Q.15. Do you think that friends can influence one to take alcohol/drugs? If yes, how may one protect himself/herself from such an influence?Ans. Yes, friends can influence one to take drugs and alcohol. A person can take the following steps for protecting himself/herself against drug abuse:(a) Increase your will power to stay away from alcohol and drugs. One should not experiment with alcohol for curiosity and fun.(b) Avoid the company of friends who take drugs.(c) Seek help from parents and peers.(d) Take proper knowledge and counseling about drug abuse. Devote your energy in other extra-curricular activities.(e) Seek immediate professional and medical help from psychologists and psychiatrists if symptoms of depression and frustration become apparent.Q.16. Why is that once a person starts taking alcohol or drugs, it is difficult to get rid of this habit? Discuss it with your teacher.Ans. Drug and alcohol consumption has an inherent addictive nature associated with euphoria and a temporary feeling of well-being. Repeated intake of drugs increases the tolerance level of the body’s receptors, leading to more consumption of drugs.Q.17. In your view what motivates youngsters to take to alcohol or drugs and how can this be avoided?Ans. Many factors are responsible for motivating youngsters towards alcohol or drugs. Curiosity, need for adventure and excitement, experimentation are the initial causes of motivation. Some youngsters start consuming drugs and alcohol in order to overcome negative emotions (such as stress, pressure, depression, frustration) and to excel in various fields. Several mediums like television, internet, newspaper, movies etc. are also responsible for promoting the idea of alcohol to the younger generation. Among these factors, reasons such as unstable and unsupportive family structures and peer pressure can also lead an individual to be dependant on drugs and alcohol.

Preventive measures against addiction of alcohol and drugs:(a) Parents should motivate and try to increase the will power of their child.(b) Parents should educate their children about the ill-effects of alcohol. They should provide them with proper knowledge and counselling regarding the consequences of addiction to alcohol.(c) It is the responsibility of the parent to discourage a child from experimenting with alcohol. Youngsters should be kept away from the company of friends who consume drugs.(d) Children should be encouraged to devote their energy in other extra- curricular and recreational activities.(e) Proper professional and medical help should be provided to a child if sudden symptoms of depression and frustration are observed.

The document NCERT Solutions: Human Health & Disease Notes | Study Biology Class 12 - NEET is a part of the NEET Course Biology Class 12.
All you need of NEET at this link: NEET