The document NCERT Solutions: Human Reproduction Notes | Study Biology Class 12 - NEET is a part of the NEET Course Biology Class 12.
All you need of NEET at this link: NEET 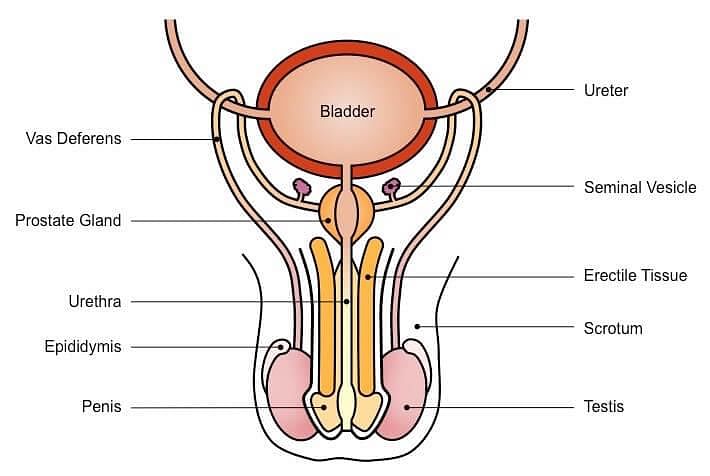 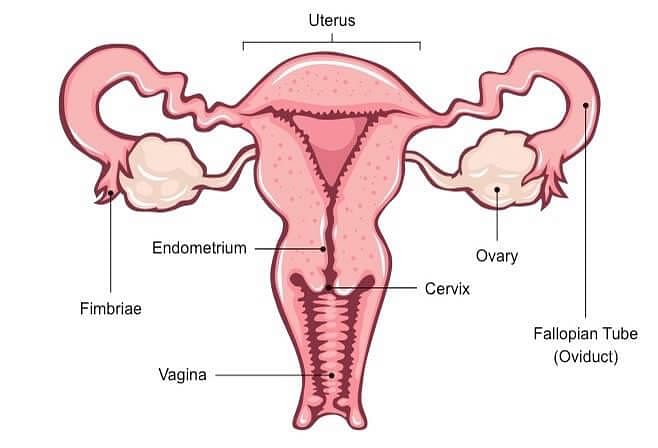 Ques 4: Write two major functions each of testis and ovary.Ans:Functions of the Testis1. They produce male gametes called spermatozoa by the process of spermatogenesis.2. The leydig cells of the seminiferous tubules secrete the male sex hormone called testosterone. Testosterone aids the development of secondary sex characteristics in males.

Functions of the ovary3. They produce female gametes called ova by the process of oogenesis.4. The growing Graffian follicles secrete the female sex hormone called estrogen. Estrogen aids the development of secondary sex characteristics in females.Ques 5: Describe the structure of a seminiferous tubule.Ans: 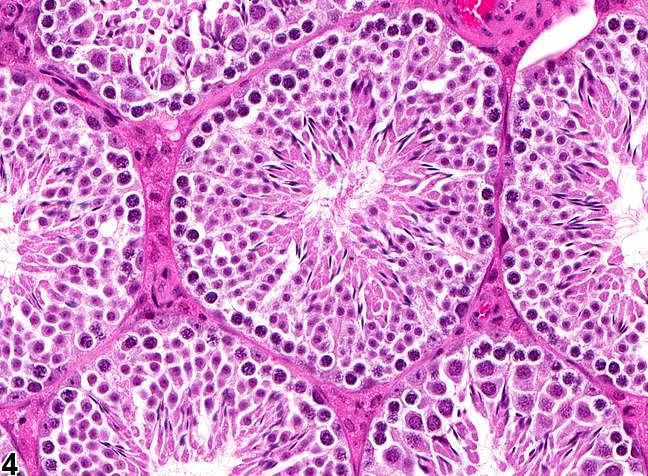 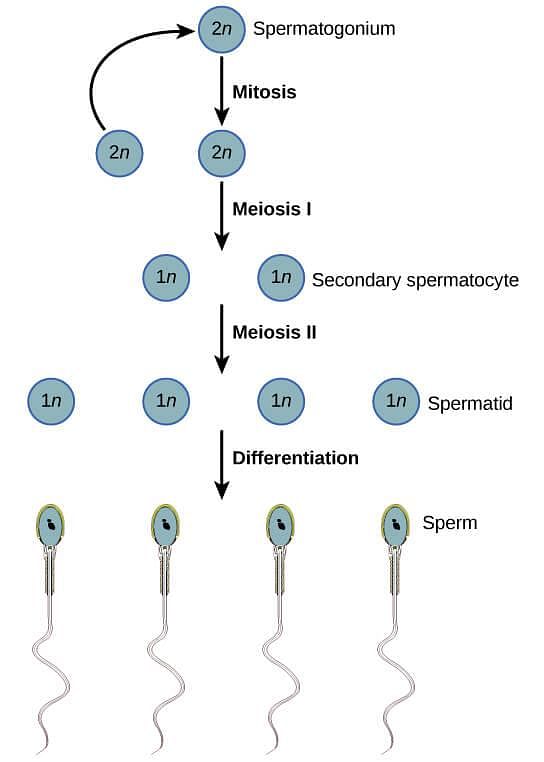 This diploid primary spermatocyte undergoes first meiotic division (meiosis I), which is a reductional division to form two equal haploid secondary spermatocytes. Each secondary spermatocyte then undergoes second meiotic division (meiosis II) to form two equal haploid spermatids. Hence, a diploid spermatogonium produces four haploid spermatids. These spermatids are transformed into spermatozoa (sperm) by the process called spermiogenesis.Ques 7: Name the hormones involved in regulation of spermatogenesis.Ans: Follicle-stimulating hormones (FSH) and luteinizing hormones (LH) are secreted by gonadotropin releasing hormones from the hypothalamus .These hormones are involved in the regulation of the process of spermatogenesis. FSH acts on sertoli cells, whereas LH acts on leydig cells of the testis and stimulates the process of spermatogenesis.Ques 8: Define spermiogenesis and spermiation. Ans:Spermiogenesis: It is the process of transforming spermatids into matured spermatozoa or sperms.Spermiation: It is the process when mature spermatozoa are released from the sertoli cells into the lumen of seminiferous tubules.Ques 9: Draw a labelled diagram of sperm.Ans:

Ques 10: What are the major components of seminal plasma?Ans: Semen (produced in males) is composed of sperms and seminal plasma. The major components of the seminal plasma in the male reproductive system are mucus, spermatozoa, and various secretions of accessory glands. The seminal plasma is rich in fructose, calcium, ascorbic acid, and certain enzymes. It provides nourishment and protection to sperms.Ques 11: What are the major functions of male accessory ducts and glands?Ans:The male accessory ducts are vasa efferentia, epididymis, vas deferens, and rete testis. They play an important role in the transport and temporary storage of sperms. On the contrary, male accessory glands are seminal vesicles, prostate glands, and bulbourethral glands. These glands secrete fluids that lubricate the reproductive system and sperms. The sperms get dispersed in the fluid which makes their transportation into the female body easier. The fluid is rich in fructose, ascorbic acid, and certain enzymes. They also provide nutrients and activate the sperm.Ques 12: What is oogenesis? Give a brief account of oogenesis.Ans: Oogenesis is the process of the formation of a mature ovum from the oogonia in females. It takes place in the ovaries. During oogenesis, a diploid oogonium or egg mother cell increases in size and gets transformed into a diploid primary oocyte. This diploid primary oocyte undergoes first meiotic division i.e., meiosis I or reductional division to form two unequal haploid cells. The smaller cell is known as the first polar body, while the larger cell is known as the secondary oocyte. This secondary oocyte undergoes second meiotic division i.e., meiosis II or equational division and gives rise to a second polar body and an ovum. Hence, in the process of oogenesis, a diploid oogonium produces a single haploid ovum while two or three polar bodies are produced. 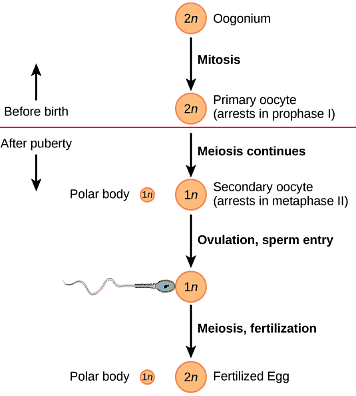 Fig: OogenesisQues 13: Draw a labeled diagram of a section through ovary.Ans: 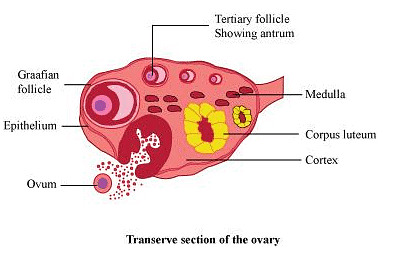 Ques 14: Draw a labelled diagram of a Graafian Follicle? Ans: 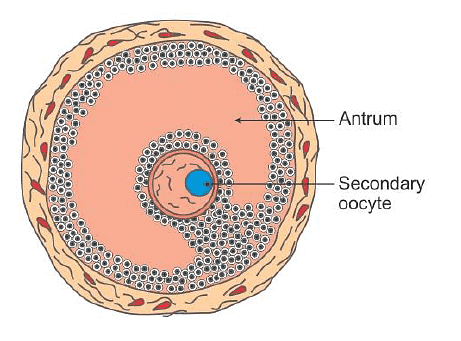 Ques 15: Name the functions of the following.(a) Corpus luteum(b) Endometrium(c) Acrosome(d) Sperm tail(e) FimbriaeAns:(a) Corpus luteum− Corpus luteum is formed from the ruptured Grafiaan follicle. It secretes progesterone hormone during the luteal phase of the menstrual cycle. A high level of progesterone inhibits the secretions of FSH and LH, thereby preventing ovulation. It also allows the endometrium of the uterus to proliferate and to prepare itself for implantation.(b) Endometrium− It is the innermost lining of the uterus. It is rich in glands and undergoes cyclic changes during various phases of the menstrual cycle to prepare itself for the implantation of the embryo.(c) Acrosome− It is a cap-like structure present in the anterior part of the head of the sperm. It contains hyaluronidase enzyme, which hydrolyses the outer membrane of the egg, thereby helping the sperm to penetrate the egg at the time of fertilization.(d) Sperm tail− It is the longest region of the sperm that facilitates the movement of the sperm inside the female reproductive tract.(e) Fimbriae− They are finger-like projections at the ovarian end of the fallopian tube. They help in the collection of the ovum (after ovulation), which is facilitated by the beating of the cilia.

The follicle stimulating hormone (FSH), luteinizing hormone (LH), estrogen, and progesterone are the various hormones that regulate the menstrual cycle. The level of FSH and LH secreted from the anterior pituitary gland increases during the follicular phase. FSH secreted under the influence of RH (releasing hormone) from the hypothalamus stimulates the conversion of a primary follicle into a graafian follicle. The level of LH increases gradually leading to the growth of follicle and secretion of estrogen. Estrogen inhibits the secretion of FSH and stimulates the secretion of luteinizing hormone. It also causes the thickening of the uterine endometrium. The increased level of LH causes the rupturing of the graafian follicle and release the ovum into the fallopian tube. The ruptured graafian follicle changes to corpus luteum and starts secreting progesterone hormone during the luteal phase. Progesterone hormone helps in the maintenance and preparation of endometrium for the implantation of the embryo. High levels of progesterone hormone in the blood decrease the secretion of LH and FSH, therefore inhibiting further ovulation.Ques 18: What is parturition? Which hormones are involved in induction of parturition?Ans: Parturition is the process of giving birth to a baby as the development of the foetus gets completed in the mother’s womb. The hormones involved in this process are oxytocin and relaxin. 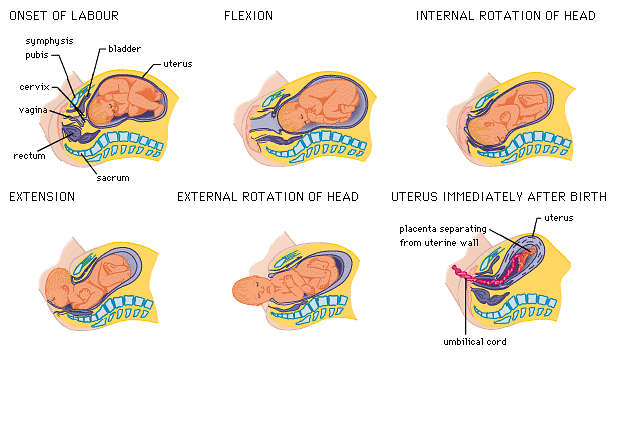 Fig: Parturition Oxytocin leads to the contraction of smooth muscles of myometrium of the uterus, which directs the full term foetus towards the birth canal. On the other hand, relaxin hormone causes relaxation of the pelvic ligaments and prepares the uterus for child birth.Ques 19: In our society the women are often blamed for giving birth to daughters. Can you explain why this is not correct?Ans: All human beings have 23 pairs of chromosomes. Human males have 22 pairs of autosomes and contain one or two types of sex chromosome. They are either X or Y. On the contrary, human females have 22 pairs of autosomes and contain only the X sex chromosome. The sex of an individual is determined by the type of the male gamete (X or Y), which fuses with the X chromosome of the female. If the fertilizing sperm is X, then the baby will be a girl and if it is Y, then the baby will be a boy. Hence, it is incorrect to blame a woman for the gender of the child.

Ques 20: How many eggs are released by a human ovary in a month? How many eggs do you think would have been released if the mother gave birth to identical twins? Would your answer change if the twins born were fraternal?Ans: An ovary releases an egg every month. When two babies are produced in succession, they are called twins. Generally, twins are produced from a single egg by the separation of early blastomeres resulting from the first zygotic cleavage. As a result, the young ones formed will have the same genetic make- up and are thus, called identical twins.

If the twins born are fraternal, then they would have developed from two separate eggs. This happens when two eggs (one from each ovary) are released at the same time and get fertilized by two separate sperms. Hence, the young ones developed will have separate genes and are therefore, called non-identical or fraternal twins.

The document NCERT Solutions: Human Reproduction Notes | Study Biology Class 12 - NEET is a part of the NEET Course Biology Class 12.
All you need of NEET at this link: NEET