Question 7: Why do we need an index number?Answer: An index number is a statistical device that is used to measure the changes in the related variables. Its importance is explained in the following points:1. To measure change in the price levelIndex numbers measure and compare prices of different commodities with the help of Wholesale Price Index (WPI). It is widely used to measure the level of inflation in an economy.2. To study a change in the standard of livingIndex numbers help to assess the living standard of people. Cost of living index measures the relative cost of living over time. If the index number has a low value, then it implies that people have low standard of living and vice-versa.3. Useful in planning and decision makingIndex numbers serve as the most important tool for business communities for drafting various plans and designing various policies. It is useful for the government and the planners to work out inflation rate with the help of consumer price index.4. To determine the level of productionIndex number of Industrial Production measures changes in the physical volume of production. Also, the production index is an important indicator to ascertain the output level.5. To help the government in framing policy.Index numbers are of great help to the government to frame fiscal and monetary policies. The government formulates policies regarding inflation, trade, income, salaries and allowances.Question 8: What are the desirable properties of the base period?Answer: The base period should have the following desirable properties:1. The base year should not be either too short or too long: It should not be either less than a month or more than a year for calculation purpose.2. The base year should not belong to too near or too far: Statisticians compare the current year’s conditions with the conditions in the base year. So, if the base year is too far from the current year, then the comparison becomes meaningless. Similarly, if the base year is too near to the current year, then comparison fails to capture the change in the taste, preferences, fashion, etc. Thus, in order to conduct a meaningful comparison, the base year should not be either too far or too near to the current year.3. The base year should be so selected that the data for the same should be available: The data for a year should be available in order to regard that particular year to be the base year. This enables one to draw conclusions, inferences and for making comparisons.4. The base period should be constantly updated: The base year should be constantly updated due to the changes in taste, preferences and fashion otherwise; the comparison becomes misleading or inconclusive.Question 9: Why is it essential to have different CPI for different categories of consumers?Answer: The Consumer Price Index (CPI) in India includes the following three components:1. CPI for Industrial Workers.2. CPI for Urban Non-manual Employees.3. CPI for Agricultural Labourers.The three CIPs are calculated on regular basis to get the aggregate effect of the changes in retail prices. While the CPI for industrial workers and agricultural labourers are calculated and published by Labour Bureau, Shimla, the CPI for the urban non-manual employees is calculated and published by the Central Statistical Organisation (CSO). The rationale behind carrying out separate calculation of CPI for industrial and agricultural labourers and CPI for urban non-manual employees is that the consumption baskets of the former group (i.e. industrial workers and agricultural labourers) differs significantly from that of the later (i.e. urban non-manual employees). Thus, as the consumption pattern differs among the two groups and to assess the impact of the price change on the consumption pattern, CPI is calculated separately for each group.Question 10: What does a consumer price index for industrial workers measure?Answer: A Consumer Price Index for Industrial Workers measures the impact of changes in the retail prices on the cost of living of industrial workers. In a country like India, CPI for industrial workers is estimated and published by the Labour Bureau, Shimla taking 1982 as the base year for the current series. In India, CPI for industrial workers is the most popular index and is used by the government to regulate Dearness Allowance (D.A.) to compensate its employees against the price rise.The weight schemes in CPI for Industrial Workers include food, pan, supari, tobacco, fuel and lighting, housing, clothing, and miscellaneous expenses. Food being the most important component has the highest weight. Thus, it implies that the food price changes have a significant impact on the CPI.

Question 11: What is the difference between a price index and a quantity index?Answer: 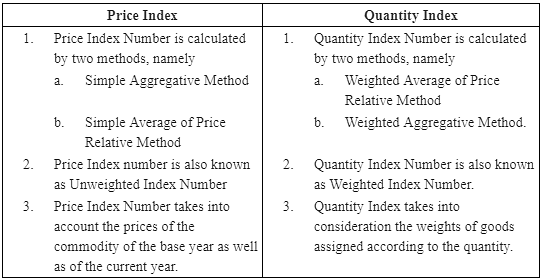 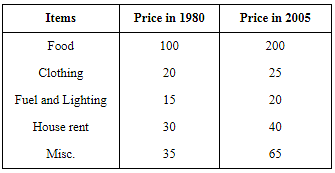 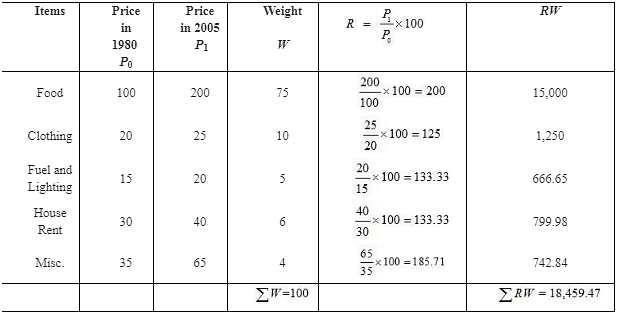 Question 15: Read the following table carefully and give your comments. 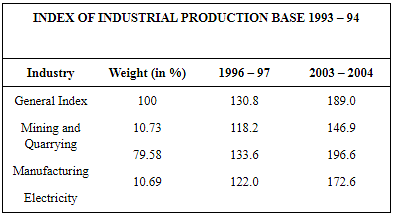 Question 19: An enquiry into the budgets of the middle class families in a certain city gave the following information; 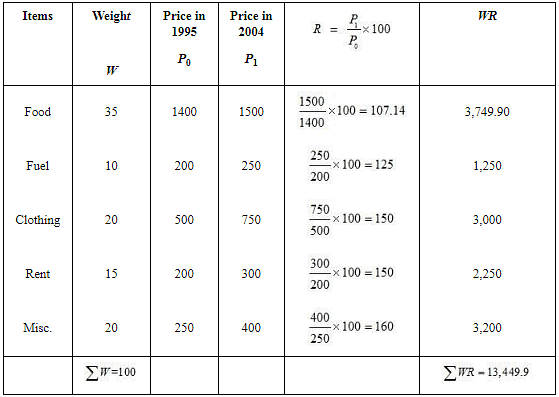 Question 20: Record the daily expenditure, quantities bought and prices paid per unit of the daily purchases of your family for two weeks. How has the price change affected your family?Answer: 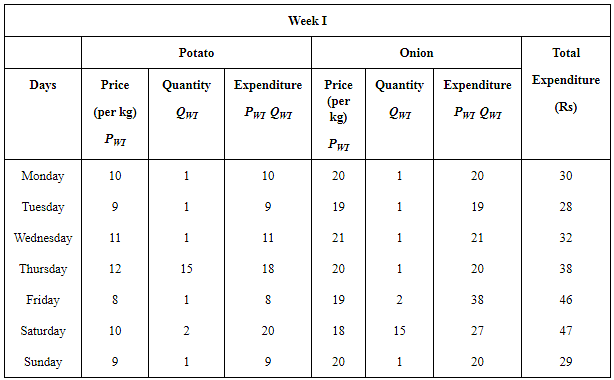 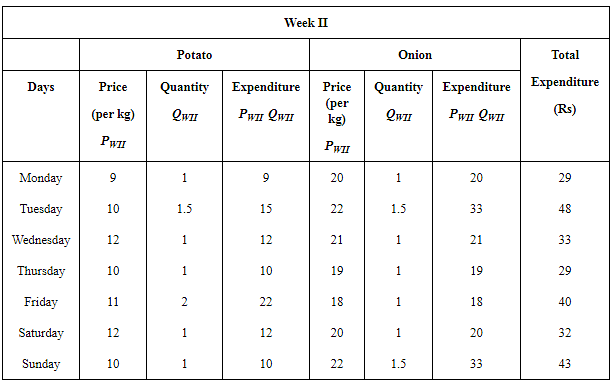 The household on Monday of week one (WI) spend Rs 30, by buying 1 kg of Potato and 1kg of Onion at Rs 10 and Rs 20 per kg respectively, whereas, the price of Potato on Monday of the week second (WII) has reduced from Rs 10 to Rs 9 resulting in the reduction in the expenditure incurred by the household. Therefore, we can conclude that the decrease in price leads to decrease in expenditure given the quantity purchased. We can also analyze that the price and quantity purchased by the household shares a negative relationship with each other.Question 21: Given the following data: 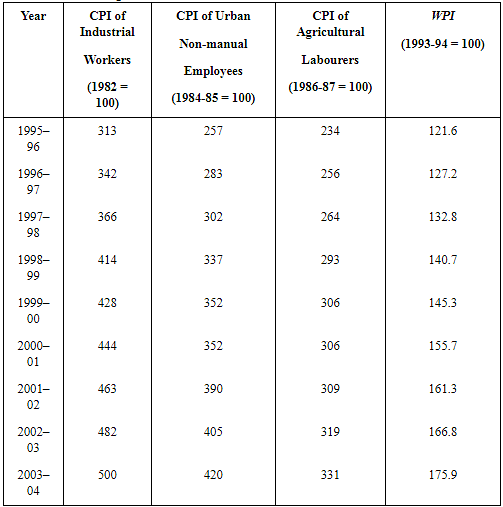 Source: Economic Survey, Government of India 2004-2005(i) Calculate the inflation rates using different index numbers.(ii) Comment on the relative values of the index numbers.(iii) Are they comparable?Answer:(i)(a) 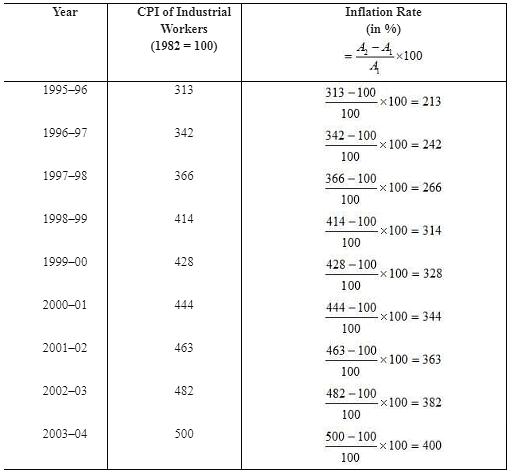 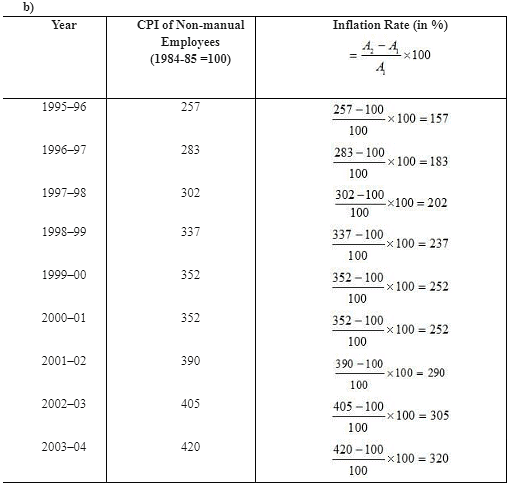 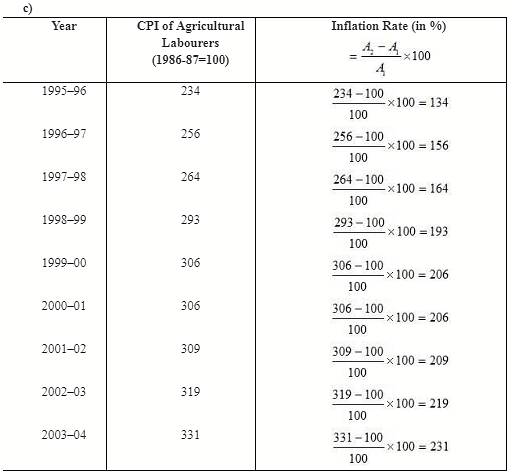 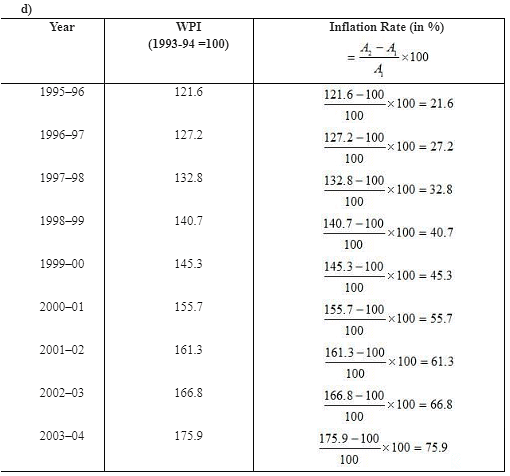 (ii) The inflation rate for industrial worker with the base year 1982 is the highest and WPI with the base year 1993-94 has the least.(iii) No, the index numbers are not comparable because of the following reasons:1.Base periods for CPI of industrial workers, urban non-manual workers, agricultural labourers and WPI are different.2.Commodities and their weightage given to different index may vary from one index number to another.