Q1 : Why is the Enlightenment important for the development of sociology?Answer :The Enlightenment is important for the development of sociology because it helped in the development of secular, scientific and humanistic attitudes of mind during the late 17th and 18th centuries. This is because 'enlightenment' positioned the human being as the central figure of the universe, with rational thought at its core. Rational and critical thinking transformed human beings into both producer and user of all knowledge. Those who did not adopt the new ways of thinking and reasoning were deemed as deficient and primitive. This development influenced society as it was a product of human interaction. Thus, it helped sociology to grow as a rational and scientific subject with critical analysis.

Q2 : How was the Industrial Revolution responsible for giving rise to sociology?

Answer :The Industrial Revolution brought many changes in the society. The invention of new machines led to evolution in the organisation of labour and markets. The factory system and manufacturing on mass scale led to changes in modes of production and acquisition of raw materials from around the world. The growth of industries, urban space, slums and modern form of government was a social consequence of these developments. As a result, the industrial revolution caused significant changed in society, and thus the need to understand it also grew and led to the emergence of sociology.

The scientific analysis of developments and study of social behaviour in industrialised societies were the main subjects of sociology. This was made possible by empirical observation and study of the information about social indicators generated by the state.

Q3 : What are the various components of a mode of production?

At a specific level, the base of production is economic and includes productive forces and production relations. The productive forces include land, labour, technology and sources of energy. Production relations refer to economic relationships and forms of labour organisation that are involved in production. Property relations are based on the ownership of means of production.Q4 : Why do classes come into conflict, according to Marx?Answer :According to Karl Marx, the groups with similar interests and common objectives form same classes. This formation of classes isbased on a historical process, which means that in every society class, identity among the people was present. With the change in modes of production, technology and social relations, these classes became antagonist to each other, thus resulting in class  conflict. For instance, in a capitalist society, there is a conflict between the capitalists and the working class. In such a society, both of them are in a direct opposition to each other and hence the class conflict arises between classes.

Q6 : What is the difference between `mechanical' and `organic' solidarity? 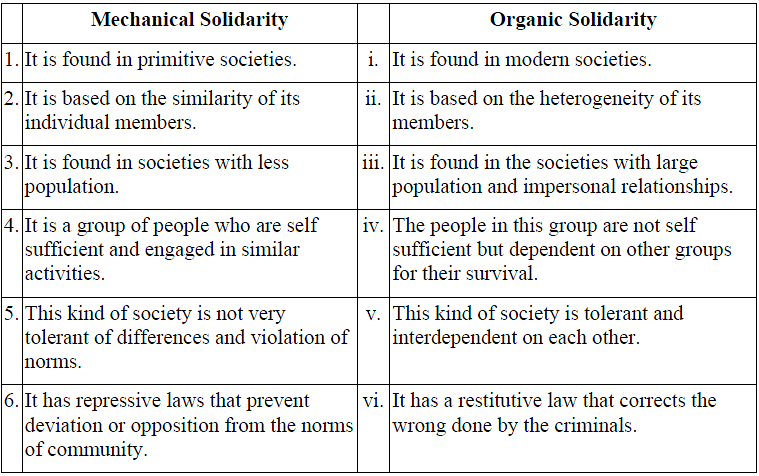 Q7 : Show, with examples, how moral codes are indicators of social solidarity

Answer :According to Durkheim, moral codes are indicators of social solidarity because society existed as a moral community above the individuals. Moral codes were codes of conduct that were collectively agreed upon. They reflected the prevailing social conditions and were manifested in the practices in everyday life. The ties that the individuals were bounded with, were important for the society, and these exerted a pressure on people to confirm that the norms and values of the society are not violated by any means.

Therefore, the individual's behaviour was limited and predictable which made it easy to understand the social solidarity which governed them. For example, caste system in India is a moral code that is reflective of social solidarity among various groups belonging to same caste.

Q8 : What are the basic features of bureaucracy?

Answer :The basic features of bureaucracy are:

(i) Functioning of Officials - It means that the officials have fixed areas of jurisdiction and are governed by rules and laws. The responsibilities of the officials are defined by the authority available to them and they have to function under the command of higher authorities. The officials are appointed on the basis of their qualifications.

(ii) Hierarchical Ordering of Positions - The authority of the officers is placed in a top down hierarchy.

(iii) Reliance on Written Document - The management of the organisation is carried out on the basis of written documents. Records are preserved for reference and decision making is cumulative.

(v) Conduct in Office - The conduct of the officers is maintained by strict rules and regulations. The public behaviour is separated from behaviour in private domain. Officials are also held accountable for their conduct.

Q9 : What is special or different about the kind of objectivity needed in social science?

Answer :The special or different kind of objectivity needed in social science is 'value neutrality'. According Max Weber, it was important for sociologists to understand the subject matter of sociology in an objective manner as social interactions incorporated subjective human meanings, values, feelings, prejudices and ideals. For this, a sociologist had to study and record the views of people and their personal beliefs in a neutral way through empathetic understanding. That is, s/he had to describe and could not judge or imply her/his own conceptions to the understanding of others. Social scientists were themselves a part of society. Therefore, the exercise of such objectivity is deemed to be unique.

Q10 : Can you identify any ideas or theories which have led to the formation of social movements in India in recent times?

Answer :Many social theories have been at the root of social movements in India after independence. These include theories related to socialism, feminism and environmentalism. Socialist movements have strived to secure economic justice for backward classes. The ideal of socialism has been recognised in the preamble of the Constitution of India as well. Dalits and tribals have participated in socio-political movements to acquire political power based on the ideas of social reforms movements of nineteenth and twentieth century. These groups had been exploited from ancient time and are now endeavouring to claim their place in society. Feminism seeks to redefine the role of women in society and bring it on equal footing with that of men. Feminist movements have struggled against stereotypes and made efforts to secure the rights of women at home and workplace with some degree of success. Environmental movements have combined environmental and social concerns of people which have been overshadowed by developmental concerns. The Gandhian ideals of peaceful agitation and simplistic living have their association with most of these movements. Environmentalism has recently acquired a prominent focus among social concerns with problems like climate change and its attendant costs, particularly for developing countries. Major socio-environmental movements in India are the Chipko movement, the Appiko movement, Narmada Bachao Andolan and Silent Valley conservation.

Q11 : Try to find out what Marx and Weber wrote about India.

(i) Karl Marx - He referred to the villages of India as "little communities". He was of the opinion that India was a self sufficient groupwhich had no contact with the outside world. India had its own institutions and beliefs that controlled the human behaviour. Marx also opposed the British rule in Indian society and was totally against it. He wrote many articles on India under the British Raj, in order to throw light upon his views.

(ii)Max Weber - He studied India under his works on the 'Sociology of Religion'. Weber understood the Indian society as orthodox and suppressed, under the barriers of the caste system. He emphasised throughout his studies the need of rational thinking, which was opposed by the caste system in India. He also believed that the religion and caste system together acted against economic development.

Q12 : Can you think of reasons why we should study the work of thinkers who died long ago? What could be some reasons to not study them?

The work of thinkers who died long ago needs to be studied because it is important to understand the impact of their ideologies inorder to know the present-day societies well. For example, to understand the communist model and its failures, one needs to study the theories developed by Karl Marx on capitalism and communism.

Their theories also provide many answers to social developments of the past. For example, the progress of western societies compared to Asian societies can be understood through the study of Protestant-Ethic and the Rise of Capitalism by Max Weber.

The difference between sociology and psychology can be understood by the study of 'Suicide' done by Emile Durkheim.

Reasons for not studying the works of early thinkers are that some of the old concepts may not be applicable to the present day societies. This can be attributed to unforeseen changes in social, economic, cultural and technological fields which accompany the advent of a new era. For instance, the theory of Karl Marx where he concludes that the working class would protest against the capitalist and a new form of socialist regime would emerge, was eventually proved wrong and later the theory of Max Weber was accepted. Also, there are many critics to the theory. For instance the ideology of the Indian villages being self sufficient entity by the western scholars, was highly criticised by the Indian scholars like M.N. Srinivas, according to whom, the villages were connected with the outside world.