4. Can you point to a few other situations where laws (or rules) exist but people do not follow them because of poor enforcement? (For example, overspeeding by motorists). What are the problems in enforcement? Can you suggest some ways in which enforcement can be improved?
Ans. (i) Boarding in a running bus
(ii) Urinating at public places
(iii) Employing children under 14 years of age as domestic helpers
(iv) Giving and taking dowry at the time of marriage The laws regarding the above situations are not enforced because the government does not take them seriously. Nor is the public so aware.
It is up to we, the citizens of the  country, who can take initiatives to improve the enforcement.

6. Why do we need new laws?
Ans. New laws are needed in order to check pollution, clean rivers and banning the use of polythene bags.

8. Can you think of ways in which the environment can be protected?
Ans. (i) Minimum use of private vehicles (ii) Afforestation (iii) Boycott of the use of polythene bags (iv) Proper disposal of sewage

Q.1. Talk to two workers (For example, construction workers, farm workers, factory workers, workers at any shop) to find out if they are receiving the minimum wages laid down by law?
Ans.

Q.3. Do you think the victims of the Bhopal gas tragedy got justice? Discuss.
Ans. In don’t think so. 30 years have passed, but the people are still fighting for safe drinking water, for health care facilities and jobs for the people poisoned by Union Carbide.

Q.4. What do you mean when we speak of law enforcement? Who is responsible for enforcement? Why is enforcement so important?
Ans. Law enforcement means that the provisions of the law must be implemented. The government is responsible for this. It must see that the law that it has made is applicable to all, without any discriminations.
Enforcement of law is important because in case any law is not enforced or weakly enforced, there may occur serious disaster. We must not forget the horrible consequences of the Bhopal gas tragedy. It took place only because the safety laws were lax in the country and even these weak safety law were not enforced.

Q.6. Imagine yourself to be a worker working in a chemical factory, which has received orders from the government to move to a different site 100 kms away from the present location. Write about how your life would change? Read out your responses in the classroom.
Ans. I am working in a chemical factory. Due to relocation of the factory. I have to shift to the new place. It will cause many troubles to me. I will have to get new house to live in which may or may not be suitable for my family and earning. The education of my children would be affected badly. There is no good school in the new locality. So, I will have to get my children admitted in neighbouring town. It will cost more. If I don’t disturb my children’s education, I will have to leave my family at the same place. This will again cause worry to me. I will have to curtail my expenses for double settlements.

Q.7. Write a paragraph on the various roles of the government that you have read about in this unit.
Ans. The government is liable to the welfare of its people. For this, it performs several functions. One of the most important functions of the government is to ensure that these public facilities (water, electricity, public transport, sanitation, etc.) are made available to everyone. It makes laws to protect the interests of workers. The Minimum Wages Act specifies that wages should not be below a specified minimum. The government enforces this law so that employers may not exploit their workers by paying them low wages. Through making, enforcing and upholding such laws the government tries to control the activities of individuals or private companies so as to ensure social justice.

Q.8. What are the sources of environmental pollution in your area? Discuss with respect to
(a) air;
(b) water and
(c) soil.

What are the steps being taken to reduce the pollution? Can you suggest some other measures?
Ans. The sources of environmental pollution in our area:
(a) Air – transport and factories emitting more hazardous gases.
(b) Water – disposal of factories waste in Yamuna river, immersion of idols, throwing of garbage in Yamuna river.
(c) Soil – as there is no cultivable land in this area, there is no chance of soil pollution.
Suggestions (i) Old vehicles should be banned. Diesel vehicles should be prohibited. Pollution norms should be checked strictly.
(ii) Factories should be shifted out of the town area.
(iii) Idol immersion, waste disposal in Yamuna river should be banned.

Q.9. H ow was environment treat ed earlier? What has been the change in perception? Discuss.
Ans. Environment was treated as free entity. Any industry could pollute the air and water without any restrictions. Whether it was our rivers, air, ground-water, the environment was being polluted and the health of people was completely ignored.
The Bhopal gas tragedy brought change in perception. The Indian governmentintroduced new laws on the environment. Henceforth, the polluters were to be held accountable for the damage done to environment. Now it is felt that the environment is something that people over generations will share, and it could not be destroyed merely for industrial development.

Q.10.What do you think the famous cartoonist R.K. Laxman is trying to convey in this cartoon? How does it relate to the 2006 law that you read about on page 125? 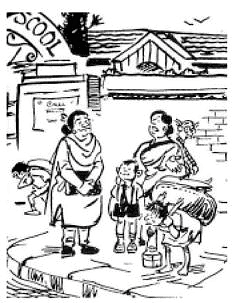 It’s really cruel burdening kids like this. I had to hire that boy to help my son!
Ans. In this cartoon, the cartoonist brings to light how we treat children of the same age differently. One child, who belongs to a rich family, gets sympathy from his mother just because she feels it is wrong to burden kids. But at the same time, she is also putting all the burden on another kid. Child labour like this is a menace to society since due to this, all children do not get the same treatment and this is injustice.