The document NCERT Solutions(Part- 2)- Data Handling Class 8 Notes | EduRev is a part of the Class 8 Course Mathematics (Maths) Class 8.
All you need of Class 8 at this link: Class 8

Question 1. Each of the following pie charts gives you a different piece of information about your class. Find the fraction of the circle representing each of these information. 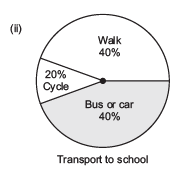 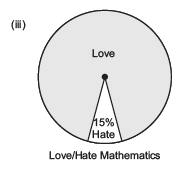 Fraction of the circle representing those who hate mathematics = 15% = 15/100 = 3/20Question 2. Answer the following questions based on the pie chart given.(i) Which type of programmes are viewed the most?(ii) Which two types of programmes have number of viewers equal to those watching sports channels? 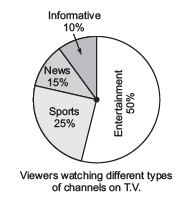 Solution: From the given pie chart, we have

(i) The entertainment programmes are viewed the most.

(ii) The news and informative programmes have the equal number of viewers.Question 3. Draw a pie chart of the data given below.

The time spent by a child during a day.

Solution: First we find the central angle corresponding to the given activities.

Now, the required pie chart is given below: Question 1. A survey was made of find the type of music that a certain group of young people liked in a city. Adjoining pie chart shows the findings of this survey. From this pie chart answer the following:

(i) If 20 people liked classical music, how many young people were surveyed?

(ii) Which type of music is liked by the maximum number of people?

(iii) If a cassette company were to make 1000 CD’s how many of each type would they make?

(i) Let the required number of young people = x

(ii) Maximum number of people like the light music.

Number of CD’s for folks

Question 2. A group of 360 people were asked to vote for their favourite season from the three seasons rainy, winter and summer.

(i) Which season got the most votes?

(ii) Find the central angle of each sector.

(iii) Draw a pie chart to show this information.

(i) Number of votes are maximum (150) for the winter season.

∴Central angle of the sector corresponding to:

Question 3. Draw a pie chart showing the following information. The table shows the colours preferred by a group of people.

Solution: Central angle of the sector corresponding to:

(a) The blue colour

(b) The green colour

Thus, the required pie chart is given below: Question 4. The adjoining pie chart gives the marks scored in an examination by a student in Hindi, English, Mathematics, Social Science and Science. If the total marks obtained by the student were 540, answer the following questions. 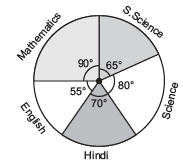 (i) In which subject did the student score 105 marks?

(ii) How many more marks were obtained by the student in Mathematics than in Hindi?

(iii) Examine whether the sum of the marks obtained in Social Science and Mathematics is more than that in Science and Hindi.

Since the sector having central angle 70° is corresponding to Hindi.

(ii) ∵ The central angle corresponding to the sector of Mathematics = 90°

(iii) Since, the sum of the central angles for Social Science and Mathematics

Also, the sum of the central angles for Science and Hindi

∵ Marks obtained are proportional to the central angles corresponding to various items and 155° > 150°.

Question 5. The number of students in a hostel, speaking different languages is given below. Display the data in a pie chart.

Thus, the required pie chart is given below: Probability is the measure of the change of the happening of an event. The probability of an out come is represented by a number between 0 and 1.

When each of the outcomes of an experiment has the same chance of occurring, we say that it is equally likely outcome.

Example: A die is thrown. Number of the six outcomes are almost equal to each other, i.e. they are equally likely to occur.

Each of the outcomes of an experiment or a collection of outcomes make an event.

Question: (i) Let us toss a coin once. Then there are only two equally likely outcomes—Head or tail.

Since, Likely hood of getting a Head as an outcome out of the two outcomes.

Probability of getting a Tail = 1/2

∴ There are 6 equally likely outcomes.

So, probability of getting 4 as an outcome

Similarly, we get the probability of other numbers.