Ans: (i) 90 (Right angle)(ii) 30 (Acute angle)(iii) 180 (Straight angle)Ques 10: Investigate: In the given figure, the angle measure 30. Look at the same figure through a magnifying glass. Does the angle becomes larger? Does the size of the angle change?

Ans: No, the measure of angle will be same.Ques 11: Measure and classify each angle: 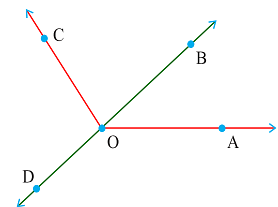 be the perpendicular to the line segment

intersect in the point A. What is the measure of ∠PAY? Ans: 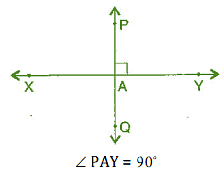 Ques 3: There are two “set-squares” in your box. What are the measures of the angles that are formed at their corners? Do they have any angle measure that is common? Ans: One set-square has 45 ,90 ,45 and other set-square has 60 ,90 ,30 . They have 90 as common angle.Ques 4: Study the diagram. The line l is perpendicular to line m. 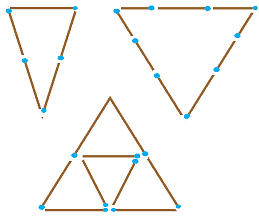 (c) 5 matchsticks This is an acute angle triangle and it is possible to make triangle with five matchsticks, in this case sum of two sides is greater than third side.

(d) 6 matchsticks This is an acute angle triangle and it is possible to make a triangle with the help of 6 matchsticks because sum of two sides is greater than third side.