Question 2:Data represented through a histogram can help in finding graphically the(i) mean(ii) mode(iii) median(iv) all the above
Answer: Graphically mode can be determined by presenting the data in the form of Histogram. The highest Histogram indicates the modal class. The intersection point of the lines diagonally joining the two top corners of the modal rectangles to the corners of the adjacent Histograms indicates the Modal Value.

Question 8:Histogram and column diagram are the same method of presentation of data (True/False).Answer: The above statement is false. This is because Histogram and column diagram are different method of presentation. While the Histogram is a Two-dimensional diagram, the bar diagram is a One-dimensional diagram. Histograms are prepared for the continuous series, whereas the bar diagrams are prepared for the discrete series. Further, Histograms are drawn continuously without any space between two consecutive Histograms, whereas the space is must between two bars in a bar diagram.Question 9: Mode of a frequency distribution can be known graphically with the help of histogram (True/False).Answer: The above statement is true. Graphically, mode can be determined by presenting the data in the form of Histogram. The highest Histogram indicates the modal class. The intersection point of the lines diagonally joining the two top corners of the modal rectangles to the corners of the adjacent Histograms indicates the Modal Value.Question 10: Median of a frequency distribution cannot be known from the ogives (True/False).Answer: The statement is false. Graphically Ogives can be determined by the intersection point of the less than Ogive and more than Ogive. The value of x-axis corresponding to the intersection point indicates the median.Question 11: What kinds of diagrams are more effective in representing the following?(i) Monthly rainfall in a year(ii) Composition of the population of Delhi by religion(iii) Components of cost in a factoryAnswer: (i) The monthly rainfall in a year can be best represented by a bar diagram as only one variable i.e. monthly rainfall is to be compared visually. The highest bar diagram indicates the highest rainfall in the corresponding month that is plotted on the x-axis.(ii) Composition of the population of Delhi by religion can be represented by a simple bar diagram. Plotting different religion on the x-axis and the number of people on the y-axis, one can easily compare the number of the population religion-wise..(iii) In order to represent different components of cost in a factory, a pie chart is more effective. The entire circle represents the total cost and various components of costsare shown by different portions of the circle.Question 12: Suppose you want to emphasise the increase in the share of urban non-workers and lower level of urbanisation in India as shown in Example 4.2. How would you do it in the tabular form?Answer:Share of Rural and Urban Non-workers in India

And the adjusted frequency will be calculated by dividing the original frequency by adjustment factor.Question 14: The Indian Sugar Mills Association reported that, ‘Sugar production during the first fortnight of December 2001 was about 3,87,000 tonnes, as against 3,78,000 tonnes during the same fortnight last year (2000). The off-take of sugar from factories during the first fortnight of December 2001 was 2,83,000 tonnes for internal consumption and 41,000 tonnes for exports as against 1,54,000 tonnes for internal consumption and nil for exports during the same fortnight last season.’(i) Present the data in tabular form.(ii) Suppose you were to present these data in diagrammatic form whichof the diagrams would you use and why?(iii) Present these data diagrammatically.Answer:

(ii) With a view to present the data diagrammatically the multiple bar diagram can be effectively used.(iii) 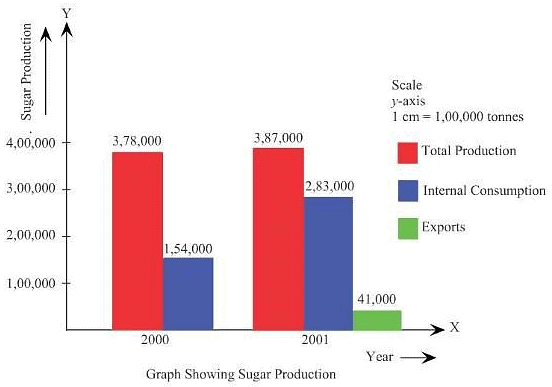 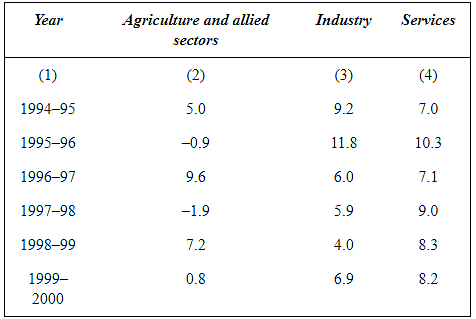 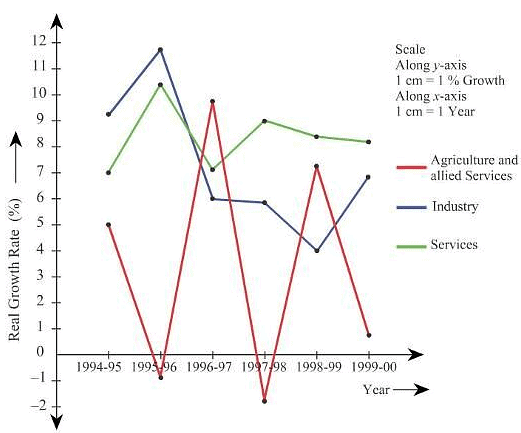