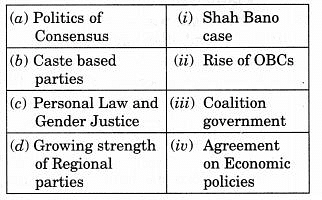 3. State the main issues in Indian politics in the period after 1989. What different configurations of political parties these differences lead to?Answer: In the decade of eighties, the country witnessed five main developments which had a long lasting impact on politics:1. End of Congress system.2. Mandal issues3. New Economic Reforms4. Babri Masjid Issues5. Assassination of Rajiv Gandhi 1989 elections led to defeat of Congress and emerged the era of ‘Multi Party- System’ when no single party secured majority in Lok Sabha elections since 1989. It led the era of coalition government also when regional parties played an crucial role in forming a ruling alliance.Since 1989, there have been nine governments at the centre either coalition government or minority government supported by other parties. In this phase, government could be formed only with the participation of many regional parties.The nineties also saw the emergence of powerful parties to represent Dalits and backward classes and regional assertions as well.

5. Trace the emergence of BJP as a significant force in post-Emergency politics.Answer: The major trends in the electoral performance of BJP since 1989 can be traced as follows:

7. Many people think that a two-party system is required for successful democracy. Drawing from India’s experience of last twenty years, write an essay on what advantages the present party system in India has.Answer: In the first decade of electoral politics India did not have a recognised opposition party. But some of vibrant and diverse opposition parties had come into being even before the first General Election of 1952 as the non-Congress parties. Hence, the roots of almost all the non-Congress parties of today can be traced to one or the other of the opposition parties of 1950s. All these opposition parties gained only a representation, still their presence played a crucial role in maintaining democratic character of system. Hence due to following reasons two party system is required for successful democracy:

On the basis of above mentioned features it is justifiable to have a two party system which have following advantages:

8. Read the passage and answer the questions below:Party politics in India has confronted numerous challenges. Not only has the Congress system destroyed itself, but the fragmentation of the Congress coalition has triggered a new emphasis on self-representation which raises questions about the party system and its capacity to accommodate diverse interest,…. An important test facing the polity is to evolve a party system or political parties that can effectively articulate and aggregate a variety of interests.—Zoya Hasan(a) Write a short note on what the author calls challenges of the party system in the light of what you have read in this chapter.(b) Given an example from this chapter of the lack of accommodation and aggregation mentioned in this passage.(c) Why is it necessary for parties to accommodate and aggregate variety of interests?Answer: (a) The author calls challenges to coalition government as well as coalition in Congress party itself to trigger a new emphasis on self-representation.(b) To unsolve a party system to accommodate diverse interests but the political parties formed under the leadership of Kanshi Ram for Dalits only.(c) It is necessary for parties to accommodate and aggregate variety of interests to maintain the culture of India ‘Unity in Diversity’ so that there should be no space for separatist movements in India.

1. Name two alliances/fronts that formed the government at the centre in 1989 and 1996 respectively. Answer: National front-1989,United front-1996.

2. Mention any two incidents of violence against minority community which are a threat to democracy.Answer: 1. Violent anti-Mandal protest 2. Godhra incident

4. Which organisation took up the cause of Bahujans?Answer: The Backward and Minority Classes Employees Federation (BAMCEF) took various steps and strong position in favour of political power to Bahujans including SCs, STs, OBCs and minorities.

5. What was the status of BSP?Answer: The Bahujan Samaj Party emerged under the leadership of Kanshi Ram supported by Dalit voters in Punjab, Haryana and U.P. But in 1989 and 1991 elections, it achieved a breakthrough success in U.P.

7. When were new economic reforms announced?Answer: In 1991.

3. What was change in electoral performance of Congress party and BJP from 1984¬2004?Answer:

4. When was India’s New Economic Policy launched? Who was its chief architect?Answer: It was launched in 1991 as the structure adjustment programme and it was started by the then Prime Minister Narasimha Rao:

5. What happened to the state government after demolition of Babri Masjid?Answer:

1. Describe any four major developments in the Indian politics since 1989.Answer: In the midst of severe competition and many conflicts, a consensus appears to have emerged among most parties.This consensus consists of four elements:

2. When and why did a long phase of coalition politics begin in India?Answer: The era of coalitions could be seen after 1989 elections onwards. The Congress was the largest party but did not achieve a single majority, hence it decided to act as opposition party. This led to National Front (Alliance of Janata Dal and other regional parties). It received major support from BJP and left front. BJP and left front did not join the government but gave support from outside. The coalition era had many PMs and some of them held office for short duration.

3. “Coal ition government helps in consensus building”. Do you agree with the statement? Give arguments in support of your answer.Answer: In the midst of severe competition and conflicts, a consensus appears to have emerged among most parties consisting of following four elements:

4. Write a note on Hindu-Muslim Riots in Gujarat.Answer:

1. Read the passage given below carefully and answer the questions:Thus, with the elections of 1989, a long phase of coalition politics began in India. Since then, there have been nine governments at the Centre, all of which have either been coalition governments or minority governments supported by other parties, which did not join the government. In this new phase, any government could be formed only with the participation or support of many regional parties. This applied to the National Front in 1989, the United Front in 1996 and 1997, the NDA in 1997, BJP-led coalition in 1998, NDA in 1999 and the UPA in 2004.Questions1. What is meant by coalition politics?2. Name any two regional political parties which were a part of coalition government.3. Write the full form of NDA.4. What does a minority government mean?Answer:1. Coalition politics does not have maj ority even to a single party but parties may enter into an alliance or get support of other parties to form government.2. NDA and United front.3. National Democratic Alliance.4. Minority governments are supported by other parties which did not join the government.

2. Read the passage given below carefully and answer the questions:Infact the BSP, under Kanshi Ram’s leadership was envisaged as an organisation based on pragmatic politics. It derived confidence from the fact that the Bahujans (SC, ST, OBC and religious minorities) constituted the majority of the population, and were a formidable political force on the strength of their numbers.Questions1. Which organisation was formed by Kanshi Ram?2. Name any two religious minorities.3. Why are Bahujans considered a formidable political forces?Answer:1. BSP (Bahujan Samaj Party)2. Muslims and Christians3. Because Bahujans constituted the majority of population, hence they were formidable political force on strength of their numbers.

1. In 2014 elections, people have voted for a stable government at the Centre. Do you think that the era of coalition has ended? Support your answer with suitable arguments.Answer: After Independence, Congress party came in power. It ruled over the country as a democratic government till 1977. One after the other the government was represented by the Congress Prime Ministers like Nehru, Shastri and then Mrs. Indira Gandhi. It was due to some political upheaval; a state Emergency was declared in 1975. During Emergency all the opposition leaders were jailed and their constitutional powers were seized. It made all the opposition leaders unite and form first united party in the name of Janata Party which came in power in 1977. The general election held soon after the Emergency. Though it couldn’t last long, but it started a new concept of rule in India. One after the other, India saw many governments ruled by alliance group, except a few single-party-led government. But with the elections of 1989, a long phase of coalition politics began in India. Since then there have been nine governments at the centre all of which have either been coalition government or minority government supported by other parties which did not join the government. The National Front government in 1989, the United Front government in 1996 and 1997, the NDA government in 1997, 1998 and 1999 and then UPA government in 2004 and 2009 and again BJP-led NDA government in 2014 have been the coalition governments in India. In none of these governments any one single party had the number enough to form the government at its own. But in 2014, there was a change in the pattern. BJP could gain 284 seats in the Lok Sabha election which was sufficient to form the government at its own -which required to only 272. But as the election was fought with a pre-poll alliance by NDA led by BJP. So the present government was formed with Narendra Modi, the leader of BJP.This election shows that people are again turning to the single party government at the centre which may be stable. People have experienced the lack of stability, lack of policy decision and lack of proper development in the government ruled by the coalition group.

3. What was Mandal Commission? Did it try to solve the problems of other Backward classes? State any two arguments in support of your answer?Answer: Bindeshwari Prasad Mandal was the chairperson of Mandal commission set up in 1978 to investigate the extent of educational and social backwardness among various sections of society and recommended way to identify these classes.The Mandal commission gave its recommendations in 1980:

The government of India accepted recommendations in 1990:

1. Study the picture given below and answer the questions that follow: 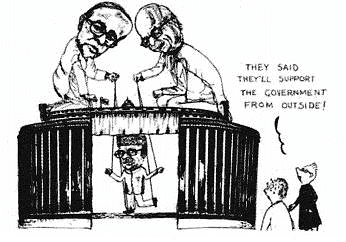 2. Study the picture given below and answer the questions that follow: 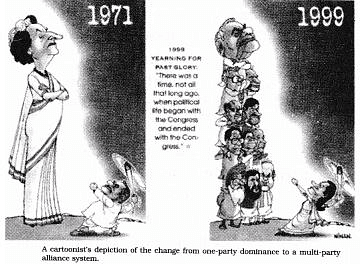 Questions1. What does the picture indicate?2. Which party is being referred to as one party dominance?3. Identify female character in the cartoon.Answer:1. It depicts change from one party dominance to a multi-party alliance system.2. Congress.3. Mrs. Indira Gandhi.