Q.2. Point out which of the following were brought in with British art:
(a) oil painting
(b) miniature
(c) life-size portrait painting
(d) use of perspective
(e) mural art

Q.3. Describe in your own words one painting from this chapter which suggests that British were more powerful than Indians. How does the artist depict this?
Ans. The painting given below is painted by Rober Kerr Porter. In this painting the painter has shown the storming of Seringapatam, the capital of Tipu Sultan by the British troops.

Tipu Sultan of Mysore was one of the most powerful enemies of the British. He was finally defeated in 1799 at the famous battle of Seringapatam. In the picture the British troops are shown storming the fort from all sides, cutting Tipu’s soldiers to pieces, climbing the walls, raising the British flag aloft the ramparts of Tipu’s fort. The painting dramatises the event and at the same time glorifies the British victory.
Thus, imperial history paintings always tried to depict British more powerful than Indians.

Q.4. Why did the scroll painters and potters come to Kalighat? Why did they begin to paint new themes?
Ans. The scroll painters and potters came to Kalighat and settled there because this was a time when the city was expanding as a commercial and administrative centre. Colonial offices were coming up, new buildings and roads were being constructed, markets were being set up. The city appeared as a place of opportunity where people could come to make a new living.
They began to paint new themes because values, tastes, social norms and customs were undergoing fast changes after the 1840s. They responded quickly to the world around and produced paintings on social and political themes. 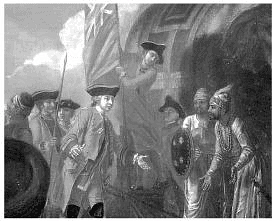 Q.7. Why do you think some artists wanted to develop national style of art?
Ans. Some artists wanted to develop a national style of art because in their views the art of Ravi Varma was imitative and westernised. It was unsuitable for depicting the nation’s ancient myths and legends. Therefore, they felt the need for a genuine Indian style of painting to draw inspiration from non-western art tradition. In this way they made an attempt to capture the real spiritual essence of the East.

Q.8. Why did some artists produce cheap popular prints? What influence would such prints have had on the minds of people who looked at them?
Ans. Some artists produced cheap popular prints so that even the poor could buy them. Such prints made mixed influences on the minds of those who saw them. For some, these prints were sentimental while for the others, spiritualism could not be seen as the central feature of the Indian culture. They felt that artists had to explore  real life instead of illustrating ancient books. They must look for inspiration for living folk art and tribal designs rather than ancient art forms. In the midst of such debates, new movements of art grew and styles of art changed subsequently.