The document NCERT Solutions - The Summer of the Beautiful White Horse Notes | Study English Class 11 - Class 11 is a part of the Class 11 Course English Class 11.
All you need of Class 11 at this link: Class 11

The Summer of the Beautiful White Horse is written by William Saroyan. The story is about two Armenian boys – Aram and Mourad who belong to the Garoghlanaian family. Their tribe is known for their honesty. They are poor and can hardly earn money for food. They both long to ride a horse. Mourad had stolen a horse from a farmer a month ago. One early morning, he brought it to the window of Aram and asked him to come along for a ride. They rode the horse for many days. When Aram gets to know the horse is stolen, he gets shocked but discounts the stealing in his mind. One day the owner of the horse, John Byro, comes to his house to complain about his missing horse to Uncle Khosrove.One day on their way back to hide the horse on the deserted vineyard, they meet the owner and feel guilty at the end. The next morning, they returned the horse back to the owner’s barn. 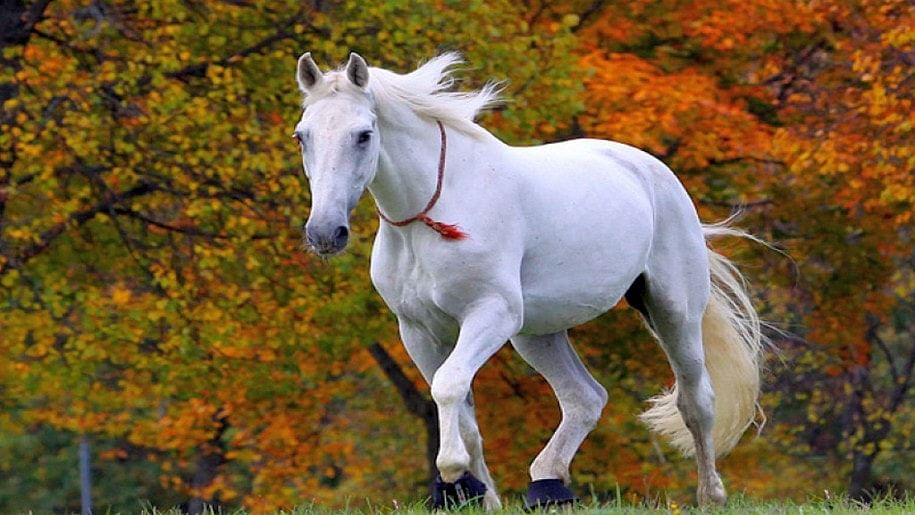 Question 1: You will probably agree that this story does not have a breathless adventure and exciting action. Then what in your opinion makes it interesting?Answer: The various reasons which make this story mind-gripping and a real page-turner, are:1. The innocence of the language keeps us in suspense about the belongingness of the horse.2. The mystery behind riding horse.

The interesting feature which makes this story captivating is the way in which the relationship between the author and his cousin develops.

Question 2: Did the boys return the horse because they were conscience-stricken or because they were afraid?Answer: The most beautiful essence of this story is the fact that the boys were very innocent and meant no harm to anyone. They were just dreamy and wished to ride a horse. It pricked their conscience when they saw the clean heart of the farmer, John Byro, who didn't suspect them even for once for stealing the horse. They were not afraid but were guilt-stricken when they met a pure-hearted soul like John, who couldn't even think of people of their clan stealing, even after he said it was confirmed that the horse resembled his, just like twins. The children might have also been afraid of ruining the prestige and honor of their families.

Question 3: “One day back there in the good old days when I was nine and the world was full of every imaginable kind of magnificence, and life was still a delightful and mysterious dream...” The story begins in a mood of nostalgia. Can you narrate some incidents from your childhood that might make an interesting story?Answer: We are a small happy family consisting of three members. Luckily, we shared a common hobby of traveling. We were in the lap of the Himalayas, somewhere near Ranikhet in the Garhwal range, when suddenly my parents suggested that I should study in a residential school there. I seemed extremely elated with the fantastic idea. Years later, when I was in Grade 7, my parents started searching for a good boarding school where they could put me in for my further studies. I don't have words that could describe my exact feeling at that point in time. I was very happy as well as equally scared at the very thought of living separately from my family. I knew very well by then that this would be a final farewell from my home and my family. Further studies, college, and now in a job, I have always gone back home on vacations and had a very great time, but I have always been very aware deep inside that I was a boarder and had to leave within a few days. I never knew where the towel was hung, when the milkman came, when my mother sat down to have her evening tea, nothing. I did not even find it necessary to know all these minor details because I knew one thing for sure, I was a guest for merely a week so why bother!

Question 4: The story revolves around characters who belong to a tribe in Armenia. Mourad and Aram are members of the Garoghlanian family. Now locate Armenia and Assyria on the atlas and prepare a write-up on the Garoghlanian tribes. You may write about people, their names, traits, geographical and economic features as suggested in the story.Answer: Here are a few words to describe the Garoghlanian tribes:

This entire concept of the existence of this tribe is said to be fictitious. It's said to be formed by William Saroyan in his book “My name is Aram” (1940). The Garoghlanian tribe is Armenian. The culture of these people, known for their honesty, is at the heart of the story. Hospitality is also an important function in the Armenian culture. Social gatherings revolve around large amounts of food. The religion of most Armenian people is Christianity, which is structured around the forgiveness of sins and focuses on the spirit of Tolerance.

Question 1: To which tribe did Mourad and Aram belong? Which traits of the tribe are highlighted in the story ‘The Summer of the Beautiful White Horse’?

Answer: Mourad and Aram belonged to the Garoghlanian tribe. The Garoghlanians were extremely poor but they were known for honesty for centuries. They were proud first, honest next and believed in doing the right deeds. No one of their tribe would ever steal. Everyone trusted them.

Question 2: What are the unique traits of the Garoghlanian tribe?Answer: The unique traits of the Garoghlanian tribe were that they were extremely poor but still they were 1 famous for their honesty for centuries. They were proud as well as honest; they believed in doing the right deeds. No one of their tribe would ever steal. They were trustworthy.

The document NCERT Solutions - The Summer of the Beautiful White Horse Notes | Study English Class 11 - Class 11 is a part of the Class 11 Course English Class 11.
All you need of Class 11 at this link: Class 11