Chapter 4- Tribals, Dikus and the Vision of a Golden Age

(c) The tribal chiefs got _________ titles in central India under the British land settlements. (a) The British described the tribal people as wild and savage.

(b) The method of sowing seeds in jhum cultivation is known as broadcasting or scattering.

(c) The tribal chiefs got land titles in central India under the British land settlements.

(d)Tribals went to work in the tea plantations of Assam and the coal mines in Bihar.

(a) Jhum cultivators plough the land and sow seeds.

(b) Cocoons were bought from the Santhals and sold by the traders at five times the purchase price.► True

(c) Birsa urged his followers to purify themselves, give up drinking liquor and stop believing in witchcraft and sorcery.

(d) The British wanted to preserve the tribal way of life.

Q 3. What problems did shifting cultivators face under British rule? 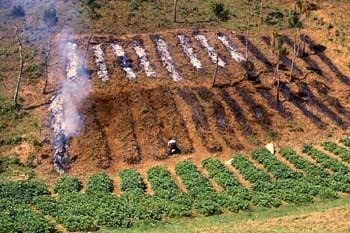 Fig: Jhum cultivation.Shifting or jhum cultivation is usually done on small patches of forest land. Under the forest laws, the British extended their control over all forests and declared that forests were state property. Thus, the jhum cultivators were prevented from practising jhum cultivation freely. Many were forced to move to other areas in search of work and livelihood.

Q 4. How did the powers of tribal chiefs change under colonial rule?

Answer Under the colonial rule the functions and powers of the tribal chiefs changed considerably. Before the arrival of the British, these tribal chiefs enjoyed a certain amount of economic power and used to administer and control their territories, which were not sow now. They were allowed to keep their land titles over a cluster of villages and rented outlands. In this process, they lost much of their administrative power and were forced to follow laws made by the British officials. They also had to pay tribute toBritish and discipline the tribal groups on behalf of the British. Hence, under the colonial rule they lost the authority they had earlier enjoyed amongst their people and were unable to fulfill their traditional functions.

Q 5. What accounts for the anger of the tribals against the dikus?

Answer The word “dikus” means outsiders or who come from outside like – moneylenders, traders, zamindars, contractors, British etc. There are a number of reasons for anger of the tribals against the dikus:→ The tribes practiced shifting cultivation but the British forced them to follow settled agriculture and also introduced land settlements.

→ Traders and moneylenders were coming into the forest, wanting to buy forest produce at a very cheap rate, luring them to take cash loans at high interests, etc. The innocent and poor people initially fell in the trap of these moneylenders and traders and remained indebted throughout their lives. So the tribals considered the traders, moneylenders as evil outsiders.

→ Under British rule the tribal chiefs lost their authorities they had enjoyed earlier amongst their people, we're unable to fulfill their traditional functions. Rather they had to pay tribute to the British.

→ By the introduction of forest laws, the British evacuated them from their own lands. As a result, they became homeless and went in search of work and livelihood.

Q 6. What was Birsa's vision of a golden age? Why do you think such a vision appealed to the people of the region?

Answer Birsa talked about a golden age, a satyug, an age of truth in which, like in the past, the tribal people would live a good life, construct embankments, tap natural springs, plant trees and orchards and practise cultivation to earn their living. He talked of an age in which the tribals would not kill one another and would live an honest life. His golden age consisted of a reformed tribal society in which there was no place for vices like liquor, uncleanliness, witchcraft and sorcery, and outside forces like the missionaries, Hindu landlords, moneylenders, traders and the Europeans. This vision was appealing to the tribal people as all the vices and outside forces that Birsa talked about were indeed thought of by everyone as the root causes of their misery and suffering.