Q.1. What do you understand by “domestic violence”? List the two rights that the new law helped achieve for women who are survivors of violence.Ans.

Q.2. Can you list one process that was used to make more people aware of the need for this law?Ans. There are many processes that are using in the presently for awaking the society. Women based groups especially by protesting and agitation highlights this with the help of media and newspapers.

Q.4. Observe the following poster carefully. What do you understand by the phrase ‘Equal Relationships are Violence Free’? 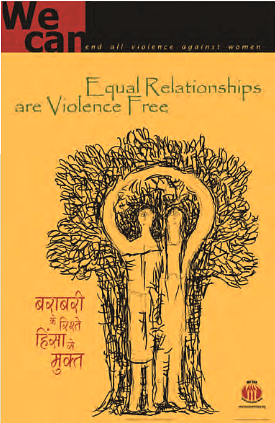 Q.1. Read the newspapers/watch news on TV for a week and find out if there are any unpopular laws that people in India or around the world are currently protesting.Ans. Recently, the Supreme Court declared certain residential as well as commercial areas as unauthorized. The government officials started the work of sealing and demolishing unauthorised buildings. It left the people jobless as well as homeless. People were compelled to leave Delhi. This law was widely protested by the people. Demonstrations took place, people gathered in front of MCD offices and even ransacked them.Q.2. List the three forms of protest that you see in the photos given below

NCERT Textbook Questions Solved [Exercises]Q.1. Write in your own words what you understand by the term the ‘rule of law’. In your response include a fictitious or real example of a violation of the rule of law.Ans. The term the ‘rule of law’ means that all laws apply equally to all citizens and no one is above the law, not even the President of India. The law cannot discriminate between person on the basis of their religion, caste or gender. Any crime or violation of law has a specific punishment as well as a process through which the guilt of the person has to be established.

Example of violation of the rule of law:

Q.3. Re-read the storyboard on how a new law on domestic violence got passed. Describe in your own words the different ways in which women’s groups worked to make this happen.Ans.

Q.4. Write in your own words what you understand by the following sentences. They also began fighting for greater equality and wanted to change the idea of law from a set of rules that they were forced to obey, to law as including ideas of justice. Ans.