The document NCERT Solutions: Units & Measurement Notes | Study Physics Class 11 - NEET is a part of the NEET Course Physics Class 11.
All you need of NEET at this link: NEET 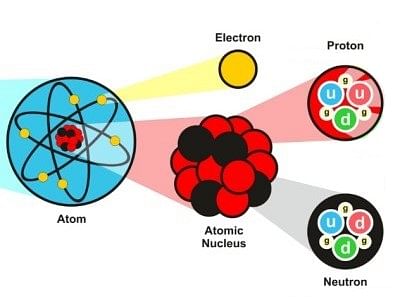 For example, the coefficient of friction is dimensionless. The coefficient of sliding friction is greater than the coefficient of rolling friction, but less than static friction.(a) An atom is a very small object in comparison to a soccer ball.(b) A jet plane moves with a speed greater than that of a bicycle.(c) Mass of Jupiter is very large as compared to the mass of a cricket ball.(d) The air inside this room contains a large number of molecules as compared to that present in a geometry box.(e) A proton is more massive than an electron.(f) Speed of sound is less than the speed of light.Q.2.5. A new unit of length is chosen such that the speed of light in vacuum is unity. What is the distance between the Sun and the Earth in terms of the new unit if light takes 8 min and 20 s to cover this distance?Ans. Distance between the Sun and the Earth:= Speed of light × Time taken by light to cover the distanceGiven that in the new unit, speed of light = 1 unitTime taken, t = 8 min 20 s = 500 s∴ Distance between the Sun and the Earth = 1 × 500 = 500 unitsQ.2.6. Which of the following is the most precise device for measuring length:(a) a vernier callipers with 20 divisions on the sliding scale(b) a screw gauge of pitch 1 mm and 100 divisions on the circular scale(c) an optical instrument that can measure length to within a wavelength of light ?Ans. A device with minimum count is the most suitable to measure length.(a) Least count of vernier caliper= 1 standard division (SD) – 1 vernier division (VD)= 1 - (9/10) = (1/10) = 0.01 cm

(c) Least count of an optical device = Wavelength of light ∼ 10–5 cm = 0.00001 cmHence, it can be inferred that an optical instrument is the most suitable device to measure length.Q.2.7. A student measures the thickness of a human hair by looking at it through a microscope of magnification 100. He makes 20 observations and finds that the average width of the hair in the field of view of the microscope is 3.5 mm. What is the estimate on the thickness of hair?Ans. Magnification of the microscope = 100Average width of the hair in the field of view of the microscope = 3.5 mm∴ Actual thickness of the hair is 3.5/100 = 0.035 mm.Q.2.8. Answer the following:(a) You are given a thread and a metre scale. How will you estimate the diameter of the thread?(b) A screw gauge has a pitch of 1.0 mm and 200 divisions on the circular scale. Do you think it is possible to increase the accuracy of the screw gauge arbitrarily by increasing the number of divisions on the circular scale?(c) The mean diameter of a thin brass rod is to be measured by vernier callipers. Why is a set of 100 measurements of the diameter expected to yield a more reliable estimate than a set of 5 measurements only?Ans.(a) Wrap the thread on a uniform smooth rod in such a way that the coils thus formed are very close to each other. Measure the length of the thread using a metre scale. The diameter of the thread is given by the relation,Diameter = Length of thread/Number of turns

(c) 4The given quantity is 0.2370 g cm–3.For a number with decimals, the trailing zeroes are significant. Hence, besides digits 2, 3 and 7, 0 that appears after the decimal point is also a significant figure.

(e) 4The given quantity is 6.032 Nm–2.All zeroes between two non-zero digits are always significant.

The percentage errors of measurement in a, b, c and d are 1%, 3%, 4% and 2%, respectively. What is the percentage error in the quantity P? If the value of P calculated using the above relation turns out to be 3.763, to what value should you round off the result?Ans.

(c) Incorrecty = (a/T) sin(t/a)Dimension of y = M0L1T0Dimension of  a/T = M0L1T–1Dimension of  t/a = M0 L–1 T1But the argument of the trigonometric function must be dimensionless, which is not so in the given case. Hence, the formula is dimensionally incorrect.

(c) Wind speed during a storm can be measured by an anemometer. As wind blows, it rotates. The rotation made by the anemometer in one second gives the value of wind speed.

(d) Area of the head surface carrying hair = AWith the help of a screw gauge, the diameter and hence, the radius of a hair can be determined. Let it be r.∴ Area of one hair = πr2Number of strands of hair ≈ (Total surface area/Area of one hair π) = A/r2

This relation shows that nuclear mass depends only on constant r0. Hence, the nuclear mass densities of all nuclei are nearly the same.Density of sodium nucleus is given by,

Q.2.29. A LASER is a source of very intense, monochromatic, and unidirectional beam of light. These properties of a laser light can be exploited to measure long distances. The distance of the Moon from the Earth has been already determined very precisely using a laser as a source of light. A laser light beamed at the Moon takes 2.56 s to return after reflection at the Moon’s surface. How much is the radius of the lunar orbit around the Earth?Ans. Time taken by the laser beam to return to Earth after reflection from the Moon = 2.56 sSpeed of light = 3 × 108 m/sTime taken by the laser beam to reach Moon = (1/2) × 2.56 = 1.28sRadius of the lunar orbit = Distance between the Earth and the Moon= 1.28 × 3 × 108 = 3.84 × 108 m= 3.84 × 105 kmQ.2.30. A SONAR (sound navigation and ranging) uses ultrasonic waves to detect and locate objects under water. In a submarine equipped with a SONAR the time delay between generation of a probe wave and the reception of its echo after reflection from an enemy submarine is found to be 77.0 s. What is the distance of the enemy submarine? (Speed of sound in water = 1450 m s–1).Ans. Let the distance between the ship and the enemy submarine be ‘S’.Speed of sound in water = 1450 m/sTime lag between transmission and reception of Sonar waves = 77 sIn this time lag, sound waves travel a distance which is twice the distance between the ship and the submarine (2S).Time taken for the sound to reach the submarine = (1/2) × 77 = 38.5 s∴ Distance between the ship and the submarine (S) = 1450 × 38.5= 55825 m= 55.8 kmQ.2.31. The farthest objects in our Universe discovered by modern astronomers are so distant that light emitted by them takes billions of years to reach the Earth. These objects (known as quasars) have many puzzling features, which have not yet been satisfactorily explained. What is the distance in km of a quasar from which light takes 3.0 billion years to reach us?Ans. Time taken by quasar light to reach Earth = 3 billion years= 3 × 109 years= 3 × 109 × 365 × 24 × 60 × 60 sSpeed of light = 3 × 108 m/sDistance between the Earth and quasar= (3 × 108) × (3 × 109 × 365 × 24 × 60 × 60)= 283824 × 1020 m= 2.8 × 1022 kmQ.2.32. It is a well known fact that during a total solar eclipse the disk of the moon almost completely covers the disk of the Sun. From this fact and from the information you can gather from examples 2.3 and 2.4, determine the approximate diameter of the moon.Ans. The position of the Sun, Moon, and Earth during a lunar eclipse is shown in the given figure.

Substituting these values in the equation, we get

The document NCERT Solutions: Units & Measurement Notes | Study Physics Class 11 - NEET is a part of the NEET Course Physics Class 11.
All you need of NEET at this link: NEET