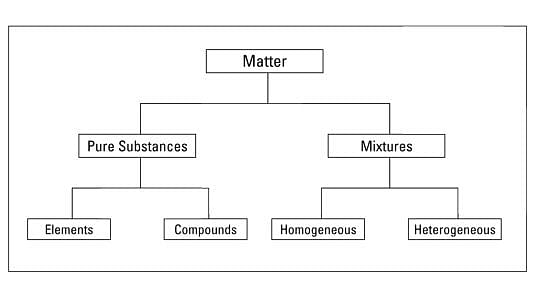 (a) Pure Substance and Mixture

(b) Homogeneous and Heterogeneous Substance

Pure substance are classified into elements and compounds:

» H stands for Hydrogen, N for Nitrogen, etc. Two letters are used in cases of two or more elements having the same initial letter. A second prominent letter ( small) from its name is added to the initial letter.

The valency of an element is the combining capacity of an atom of the element and is measured by the number of hydrogen atoms with which it can be combined.

Elements can be normally divided into metals, non-metals and metalloids.Metals usually show some or all of the following properties:

In the alkanes, all four of the Carbon valency bonds are taken up with links to different atoms. These types of bonds are called single bonds and are generally stable and resistant to attack by other chemicals. Alkanes contain the maximum number of Hydrogen atoms possible. They are said to be saturated.The simplest Hydrocarbon is:

Another series of compounds is called the alkenes. These have a general formula: CnH2n. These compounds are named in a similar manner to the alkanes except that the suffix is one. Alkenes have fewer hydrogen atoms than the alkanes. The extra valencies leftover occur as double bonds between a pair of carbon atoms. The double bonds are more reactive than single bonds making the alkenes chemically more reactive.The simplest alkenes are listed below:

A third series are the alkynes.These have the following formula: CnH2n-2

Alkanes, alkenes and alkynes all contain carbon atoms in linear chains. When rings are combined with chains, the number of hydrocarbons is virtually infinite. There are also hydrocarbons arranged in rings. 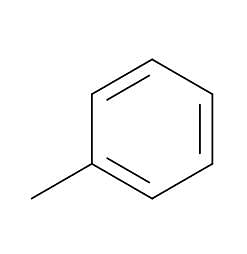 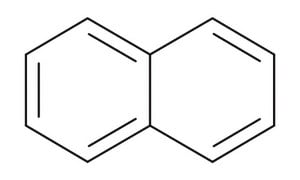 When Oxygen atoms are added, the variety of compounds grows enormously.Here are some examples where each molecule has a single functional group:

The most famous compounds containing Carbon, Hydrogen and Oxygen are the Carbohydrates. An example is the common sugar, Sucrose (C12H22O11).