The document NCERT Textbook Questions (Part - 1) - The Best Christmas Present in the World Notes | Study English Class 8 - Class 8 is a part of the Class 8 Course English Class 8.
All you need of Class 8 at this link: Class 8

Ques 1. What did the author find in a junk shop?

Ans: The author found a roll-top desk for sale in a junk shop. It was made of oak wood, but it was in a very bad condition.

Ques 2. What did he find in a secret drawer? Who do you think had put it in there?

Ans: In the secret drawer of the desk, the author found a small tin box. It had a letter in it. I think the owner of the roll-top desk might have put it there.

Ques 1. Who had written the letter, to whom, and when?

Ans: Jim Macpherson, a captain in the British army, had written that letter, dated Dec. 26, 1914, to his wife Connie. 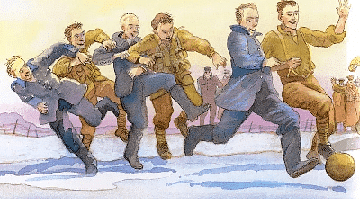 Ques 2. Why was the letter written — what was the wonderful thing that had happened?

Ans: The letter described a wonderful event. The two armies–the British and the German— fighting against each other celebrated Christmas together.

Ques 3. What jobs did Hans Wolf and Jim Macpherson have when they were not soldiers?

Ans: Before joining the army, Hans played the cello in the orchestra and Jim was a teacher.

Ques 4. Had Hans Wolf ever been to Dorset? Why did he say he knew it?

Ans: No, Hans had never been to Dorset. He had only read about Dorset in Hardy’s novel ‘Far from the Madding Crowd’.

Ques 5. Do you think Jim Macpherson came back from the war? How do you know this?

Ans: No, Jim Macpherson never came back home from the war. Perhaps therefore his wife Connie had preserved his letters.

Ques 1. Why did the author go to Bridport?

Ans: The author went to Bridport to meet Mrs Jim Macpherson and deliver to her Jim’s letter.

Ques 2.  How old was Mrs Macpherson now? Where was she?

Ans: Mrs. Macpherson was 101 years old. She was in a nursing home.

Ques 1. Who did Connie Macpherson think her visitor was?

Ans: Connie thought that the visitor was her own husband, Jim Macpherson.

Ques 2. Which sentence in the text shows that the visitor did not try to hide his identity?

Ans: That sentence is, “you told me you’d come home by Christmas, dearest,” she said, “And here you are, the best Christmas present in the world. Come closer, Jim dear, sit down.

Working with the Text (Page 16)

Ques 1. For how long do you think Connie had kept Jim’s letter? Give reasons for your answer.

Ques 2. Why do you think the desk had been sold, and when?

Ans: The desk must have been sold when Connie’s house had burnt. The table had been damaged by fire as well as water.

Ques 3. Why do Jim and Hans think that games or sports are good ways of resolving conflicts? Do you agree?

Ans: Both Jim and Hans were soldiers. Both were warm hearted. They had seen the sufferings of war. So it was natural for them to hate war. They favoured a peaceful solution to settle disputes. Games or sports, they said, were good ways of resolving conflicts. I also quite agree with them.

Ques 4. Do you think the soldiers of the two armies are like each other , or different from each other? Find evidence from the story to support your answer.

Ans: All human beings are alike in many ways. They love peace and hate war. They want to live together. Examples from the story: “Then they were calling out to us from a across no man’s land. “Happy Christmas, Tommy! Happy Christmas! “When  we had got over the surprise some of us shouted back.” Same to you, Fritz ! Same to you!” 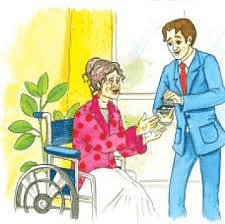 Ques 5. Mention the various ways in which the British and the German soldiers become friends and find things in common at Christmas.

Ans: The British and the German soldiers belonged to different camps. They were enemies in wartime. But after all they were human beings and therfore they had similar feelings. They shared the festive spirit of the Christmas. They got over hatred and played games, feasted and drank like good friends. Both hated war. Both were anxious to go back to their families at the end of war.

Ans: Connie thought that Jim had come back home from war. She mistook the author as Jim. She had been waiting for her husband Jim. So the coming home of Jim was the best Christmas present in the world for her.

Ques 7. Do you think the title of the story is suitable for it? Can you think of any other title(s)?

Ans: Decidedly the title of the story is most suitable. For the old Connie, no other present could have given her such joy as the coming home of Jim, her husband. Her presumption might be wrong, but she got the greatest happiness of her life.Since the story revolves around Christmas, the alternate title of the story could be ‘War and Peace’ or ‘Christmas Gift’. But neither can be a match to the present title.

The document NCERT Textbook Questions (Part - 1) - The Best Christmas Present in the World Notes | Study English Class 8 - Class 8 is a part of the Class 8 Course English Class 8.
All you need of Class 8 at this link: Class 8