The document NEET Previous Year Questions(2016-20): Principles of Inheritance & Evolution Notes | EduRev is a part of the NEET Course Biology 31 Years NEET Chapterwise Solved Papers.
All you need of NEET at this link: NEET

(a) a(b) b(c) c(d) dAns. (a)This is an autosome linked recessive trait that can be transmitted from parents to the offspring when both the partners are carrier for the gene (or heterozygous). The disease is controlled by a single pair of allele, HbA and HbS.on chromosome -11, The defect is caused by the substitution of Glutamic acid (Glu) by Valine (Val) at the sixth position of the beta globin chain of the haemoglobin molecule. The substitution of amino acid in the globin protein results due to the single base substitution at the sixth codon of the beta globin gene from GAG to GUG. Thalassemia is caused by mutations in the DNA of cells that make hemoglobin — the substance in red blood cells that carries oxygen throughout your body. This is an autosomal inheritance. Hemophilia is caused by a mutation or change, in one of the genes, that provides instructions for making the clotting factor proteins needed to form a blood clot. This change or mutation can prevent the clotting protein from working properly or to be missing altogether. These genes are located on the X chromosome.  Phenylketonuria or PKU is inherited in families in an autosomal recessive pattern. A birth defect that causes an amino acid called phenylalanine to build up in the body.Q.3. How many true breeding pea plant varieties did mendel select as pairs, which were similar except in one character with contrasting traits?      (2020)(a) 14 (b) 8(c) 4(d) 2Ans. (a)A true breeding line refers to the plant that has been self pollinated continuously  and produced generations that were stable in the inheritance of the character.Mendel selected 14 true-breeding pea plant varieties, as pairs which were similar except for one character with contrasting traits.Q.4. In Antirrhinum (Snapdragon), a red flower was crossed with a white flower and in F1 generation all pink flowers were obtained. When pink flowers were soiled, the F2 generation showed white, red and pink flowers. Choose the incorrect statements from the following.    (2019)(a) Law of segregation does not apply in this experiment.(b) This experiment docs not follow the Principle of Dominance.(c) Pink colour in is due to incomplete dominance.(d) Ratio of F2 is

Ans: (a)Law of segregation applies in this case as when pink (lowers obtained in F1, are selfed then red and while (lowers are obtained in F2 which indicates that there is no mixing of gametes.Q.5. Select the incorrect statement.    (2019)(a) Human males have one of their sex- chromosome much shorter than other.(b) Male fruit fly is heterogametic.(c) In male grasshoppers, 50% of sperms have no sex-chromosome.(d) In domesticated fowls sex of progeny depends on the type of sperm rather than egg.Ans: (d)In birds, e.g., fowls, males have homomorphic sex chromosomes (AA + ZZ.) and females have homoromorphic sex chromosomes (AA + ZW). So, males produce only one type of sperms containing (A + Z) whereas females produce two types of eggs (A + Z and A + W). Therefore, the sex ofthe progeny depends on the type ofthe egg which is fertilised by the sperm.Q.6. What map unit (Centimorgan) is adopted in the construction of genetic maps?    (2019)(a) A unit of distance between genes on chromosomes, representing 50% cross over.(b) A unit of distance between two expressed genes, representing 10% cross over.(c) A unit of distance between two expressed genes, representing 100% cross over.(d) A unit of distance between genes on chromosomes, representing 1% cross over.Ans: (d)Genetic map is a linear graphic representation of the sequence and relative distance of various genes present in a chromosome. 1% crossing over between two linked genes is known as 1 map unit or centiMorgan (cM).Q.7. The frequency of recombination between gene present on the same chromosome as a measure of the distance between genes was explained by    (2019)(a) Sutton Boveri(b) T.H. Morgan(c) Gregor J.Mendel(d) Alfred SturtevantAns: (d)T.H. Morgan coined the term linkage to describe the physical association of genes on chromosome and term recombination to describe the generation of noil-parental gene combinations. Alfred Sturtevant used the frequency of recombination between gene pairs on the same chromosome as a measure of the distance between genes.Q.8. What is the genetic disorder in which an individual has an overall masculine development, gynaecomastia, and is sterile?    (2019)(a) Down’s syndrome(b) Turner’s syndrome(c) Klinefelter’s syndrome(d) Edward syndromeAns: (c)Klinefelter’s syndrome occurs by the union of an abnormal XX egg and a normal Y sperm or a normal X egg and abnormal XY sperm. The individual has 47 chromosomes (44 + XXY). Such persons are sterile males with undeveloped testes, mental retardation, sparse body hair, long limbs and with some female characteristics such as enlarged breast, i.e., gynaecomastia.Q.9. Which of the following pairs is wrongly matched?    (2018)(a) Starch synthesis in pea : Multiple alleles(b) ABO blood grouping : Co-dominance(c) XO type sex determination: Grasshopper(d) T.H. Morgan : LinkageAns: (a)The gene for starch synthesis in pea seeds can produce more than one effect which implies it is a pleiotropic gene.Q.10. Which of the following characteristics represent ‘inheritance of blood groups’ in humans?    (2018)(i) Dominance(ii) Co-dominance(iii) Multiple allele(iv) Incomplete dominance(v) Polygenic inheritance(a) (ii), (iii) and (v)(b) (i), (ii) and (iii)(c) (ii), (iv) and (v)(d) (i), (iii) and (v)Ans: (b)ABO blood group system in human beings is an example of dominance, co-dominance and multiple allelism.IA IO IB IO or i - Alleles shows dominant-recessive relationship.lA IB - Codominance is a phenomenon in which alleles of a gene do not show dominant recessive relationship and express themselves independently when present together.IA IO IB IO or i - More than two alternate forms of a gene present on the same locus are called as multiple alleles and the mode of inheritance in the alleles is called multiple allelism.Q.11. A woman has an X-linked condition on one of her X chromosomes. This chromosome can be inherited by    (2018)(a) Only daughters(b) Only sons(c) Only grandchildren(d) Both sons and daughters.Ans: (d)Woman acts as a carrier when she has the X-linked condition on one of her X-chromosomes. Both son and daughter inherit X-chromosome from mother. Hence, one of the two daughters will be carrier and one of the two sons will be diseased. It can be explained by the given cross : 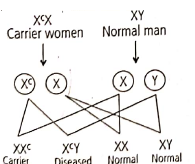 Genotype: IA IA     IAi IA      IAIB      IBiPhenotype: A       A            AB       BThus, there are four possible genotypes, viz., IA IA , IAi, IAIB and IBi and three possible phenotypes, viz.,A, AB and B among the children.Q.14. A disease caused by an autosomal primary non disjunction is    (2017)(a) Klinefelter’s syndrome(b) Turner’s syndrome(c) Sickle cell anaemia(d) Down’s syndrome.Ans: (d)Down’s syndrome is an autosomal aneuploidy, caused by the presence of an extrachromosome number 21. Both the chromosomes of the pair 21 pass into a single egg due to non disjunction during oogenesis.Q.15. Among the following characters, which one was not considered by Mendel in his experiments on pea?    (2017)(a) Trichomes-Glandular or non-glandular(b) Seed-Green or yellow(c) Pod-Inflated or constricted(d) Stem-Tall or dwarfAns: (a)Mendel considered the following characters of pea in his experiments: 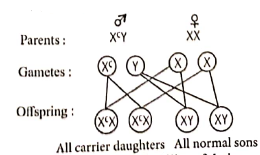 Hence, there is zero (0) probability of their son to be colour-blind.Q.19. A cell at telophase stage is observed t student in a plant brought from the field, tells his teacher that this cell is not like c cells at telophase stage. There is no form; of cell plate and thus the cell is containing more number of chromosomes as compared to other dividing cells. This would result in    (2016)(a) Somaclonal variation(b) Polyteny(c) Aneuploidy(d) polyploidyAns: (d)Polyploidy is the phenomenon of occurrence of more than two sets of chromosomes in the nucleus of a cell. Polyploidy is more common in plants. Polyploidy arises as a result of total non-disjunction of chromosomes during mitosis or meiosis.Q.20. Pick out the correct statements.    (2016)(1) Haemophilia is a sex-linked recessive Disease.(2) Down’s syndrome is due to anetiploidy(3) Phenylketonuria is an autosomal recessive gene disorder.(4) Sickle cell anaemia is an X-Iinked recessive gene disorder.(a) (1), (3) and (4) are correct.(b) (1), (2) and (3) are correct.(c) (1) and (4) are correct.(d) (2) and (4) are correct.Ans: (b)Sickle-cell anaemia is an autosomal recessive genetic disorder. It can be transmitted from parents to the offspring when both the partners are carriers of the gene (or heterozygous).Q.21. A tall true breeding garden pea plant is crossed with a dwarf true breeding garden pea plant When the F1 plants were selfed the resulting genotypes in the ratio of    (2016)(a) 3 : 1 : : Tall; Dwarf(b) 3 : 1 Dwarf : Tall(c) 1 : 2 : 1 : : Tall homozygous : Tall heterozygous : Dwarf(d) 1 : 2 : 1 : : Tall heterozygous : Tall homozygous : Dwarf.Ans: (c)When a tall true breeding garden pea plant is crossed with a dwarf true breeding garden pea plant and the F1 plants were soiled the resulting genotypes were in the ratio of 1 : 2 : 1 i.e„ Tall homozygous: Tall heterozygous : DwarfIt can be illustrated as given below: 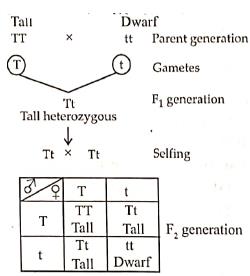 Ans: (d)Q.23. In a test cross involving F1 dihybrid flies, more parental-type offspring were produced than the recombinant-type offspring. This indicates    (2016)(a) The two genes are linked and present on the same chromosome(b) Both of the characters are controlled by more than one gene(c) The two genes are located on two different chromosomes(d) Chromosomes failed to separate during meiosisAns: (a)If in a dihybrid test cross more parental combinations appear as compared to the recombinants in F2 generation, then it is indicative of involvement of linkage. Linkage is the tendency of two different genes on the same chromosome to remain together during the separation of homologous chromosomes at meiosis. During complete linkage no recombinants are formed whereas in incomplete linkage few recombinants are produced along with parental combinations.Q.24. Which of the following most appropriately describes haemophilia?    (2016)(a) Chromosomal disorder(b) Dominant gene disorder(c) Recessive gene disorder(d) X-linked recessive gene disorderAns: (d)Haemophilia is a sex-linked disease. It occurs due to the presence of a recessive sex linked gene h, which is carried by X-chromosome.