Naphtha and Gas Cracking For Production of Olefins

Olefins are major building blocks for petrochemicals. Because of their reactivity and versatility, olefins especially the light olefins like ethylene, propylene, butenes, butadiene, etc., there has been tremendous growth in the demand of the olefins. Olefins are finding wide application in the manufacture of polymers, chemical intermediates, and synthetic rubber. Ethylene itself is basic building block for large number of petrochemicals and is quoted as king of chemicals. Some of ethylene manufacturing company and their capacity is given in Table M-VII 2.1. The global ethylene capacity at January 1, 2011, net additions and closings was more than 138 million tones compared with nearly 130 million tones in 2008 .  Global ethylene capacity is given in Table M-VII 2.2.

The steam cracker remains the fundamental unit and is the heart of any petrochemical complex and mother plant and produces large number of products and byproducts such as olefins - ethylene, propylene, butadiene, butane and butenes, isoprene, etc., and pyrolysis gasoline. The choice of the feedstock for olefin production depends on the availability of raw materials and the range of downstream products. Naphtha has made up about 50-55percent of ethylene feedstock sources since 1992. Although basic steam cracking technology remain same for naphtha, gas oil and natural gas, different configuration of steam cracking plant are available from various process licensors.

Modern ethylene plants incorporate following major process steps : cracking compression and separation of the cracked gas by low temperature fractionation. The nature of the feed stock and the level of pyrolysis severity largely determine the operating conditions in the cracking and quenching section. Various steps involved in the pyrolysis of naphtha and separation of the products are discussed below. In case of gas cracking separation of ethane and propane from natural gas is involved. Flow diagram for pyrolysis of napththa is given in Figure M-VII 2.1.

It consists of convection zone and radiant zone. In the convection zone, hydrocarbon feed stock is preheated and mixed with steam and heated to high temperature. In the convection zone the rapid rise in temperature takes place and pyrolysis reaction takes place. The addition of dilution steam enhances ethylene yield and reduces the coking tendency in the furnace coils. The production of the pyrolysis reaction consists of a wide range of saturated and unsaturated hydrocarbons.

To avoid subsequent reaction the effluent are fixed in their kinetic development by sudden quench first by indirect quench by water to 400 – 450 oC in transfer line exchanger or quench boiler. This is a large heat exchanger that is a bundle of metal tubes through which the gases pass and around which is circulated water under pressure. The hot water produced is used to generate steam for use in the plant. In the next step the quench is done by heavy product of pyrolysis. 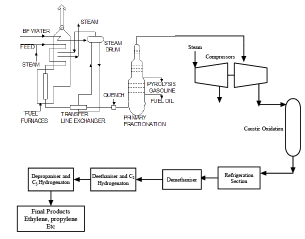 Convection Zone    Feed stock is pyrolised and the effluent conditioned

Radiation Zone      The product formed are separated and purified

Quench                  To avoid subsequent reaction the effluents are fixed in their kinetics development by sudden quench.

After compression, caustic scrubbing and drying the light effluents enter the cold section of the unit which performs the separation of (I) hydrogen to various concentration (ii) ethyllhene containing 99.4percent (iii) 95percent propylene (iv) A C4 cut containing 25-50percent butadiene (v) pyrolysis gasoline which is rich in aromatic hydrocarbons. The complexity of the separation section of a cracker increases markedly as the feed changes from ethane.

Separation of Ethylene       Ethylene is fractionated and unreacted ethane recycled

C3 cut from top of depropaniser is selectively hydrogenated to remove methyl acetylene and propadience.

Removal of propane           Separation in supplementary column for more pure