1. By nature insurance is a devise of sharing risk by large number of people among the few who are exposed to risk by one or the other reason.

2. If a large number of subscribers to insurance serve the purpose of compensation to few among them exposed to uncertain risks appears as a co-operative look.

3. Valuation of risk is determined as per predefined terms and conditions of the insurance policies.

4. Insurance provides facility of financial help in case of contingency.

5. However it depends on the value of insurance for which payment is made in case of contingency. This provides basis of the amount to be paid.

6. Insurance is a policy regulated under laws and therefore the amount of insurance can neither be paid as gambling nor as charity.

History of Insurance and its evolution in India

History of Insurance in India started  from the prehistoric period as  Insurance in its primitive form has been known to exist  from as back as 3000 BC. Various civilizations were known to practising the basic concept of insurance – pooling and sharing in an un organized manner.

While considering the history of insurance in India, the principle of insurance was reflected in the joint family concept, widely followed in many regions, and is considered as one of the best form of life insurance down the ages.

Sorrows and losses from unfortunate events were shared by family members and that helped to give them a security feeling.
Breakup of joint family system and emergence of nuclear family in the modern era, coupled with stress of family life paved path for evolution of alternative methods for insurance.

History of  Insurance in modern India

Modern Insurance in India began around 1800 AD with agencies of foreign insurance starting marine Insurance business. Some Important milestones in the insurance history of is listed below.

The formation of the Malhotra Committee in 1993 initiated reforms in the Indian insurance sector and is considered as one of the milestones in the history of Insurance in India.

The aim of the Malhotra Committee was to assess the functionality of the Indian insurance sector. This committee was also in charge of recommending the future path of insurance in India.

The Malhotra Committee attempted to improve various aspects of the insurance sector, making them more appropriate and effective for the Indian market.
The Insurance Regulatory and Development Authority Act of 1999 brought about several crucial policy changes in the insurance sector of India. It led to the formation of the Insurance Regulatory and Development Authority (IRDA) in 2000.

The goals of the IRDA are to safeguard the interests of insurance policyholders, as well as to initiate different policy measures to help sustain growth in the Indian insurance sector.

Important Milestones in the history of Indian Insurance industry.

The general insurance business in India is currently at Rs 78,000 crore (US$ 11.7 billion) premium per annum industry and is growing at a healthy rate of 17 per cent. 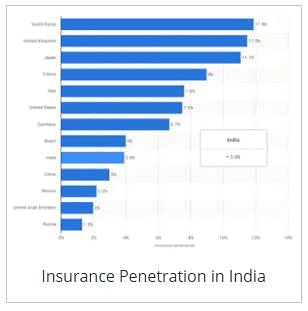 The country is the fifteenth largest insurance market in the world in terms of premium volume, and has the potential to grow exponentially in the coming years.