Nature of Bond Linking Monomers in a Polymer

In a polypeptide or a protein, amino acids are linked by a peptide bond which is formed when the carboxyl (-COOH) group of one amino acid reacts with the amino (-NH2) group of the next amino acid with the elimination of a water moiety (the process is called dehydration). In a polysaccharide, the individual monosaccharides are linked by a glycosidic bond. This bond is also formed by dehydration. This bond is formed between two carbon atoms of two adjacent monosaccharides. In a nucleic acid, a phosphate moiety links the 3’-carbon of one sugar of one nucleotide to the 5’-carbon of the sugar of the succeeding nucleotide. The bond between the phosphate and hydroxyl group of sugar is an ester bond.

As there is one such ester bond on either side, it is called phosphodiester bond. Nucleic acids exhibit a wide variety of secondary structures. For example, one of the secondary structures exhibited by DNA is the famous Watson-Crick model. This model says that DNA exists as a double helix. The two strands of polynucleotides are anti-parallel i.e., run in the opposite direction. The backbone is formed by the sugar-phosphate-sugar chain. The nitrogen bases are projected more or less perpendicular to this backbone but face inside. A and G of one strand compulsorily base pairs with T and C, respectively, on the other strand. There are two hydrogen bonds between A and T. There are three hydrogen bonds between G and C. Each strand appears like a helical staircase. Each step of ascent is represented by a pair of bases. At each step of ascent, the strand turns 36°. One full turn of the helical strand would involve ten steps or ten base pairs. Attempt drawing a line diagram. The pitch would be 34 Å. The rise per base pair would be 3.4 Å. This form of DNA with the above mentioned salient features is called B-DNA. In higher classes, you will be told that there are more than a dozen forms of DNA named after English alphabets with unique structural features. 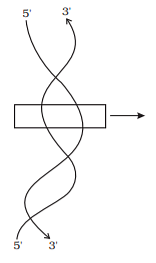 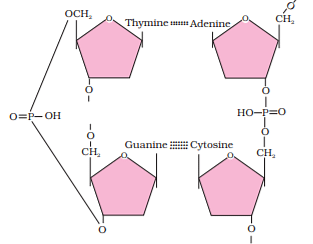 What we have learnt till now is that living organisms, be it a simple bacterial cell, a protozoan, a plant or an animal, contain thousands of organic compounds. These compounds or biomolecules are present in certain concentrations (expressed as mols/cell or mols/litre etc.). One of the greatest discoveries ever made was the observation that all these biomolecules have a turn over. This means that they are constantly being changed into some other biomolecules and also made from some other biomolecules. This breaking and making is through chemical reactions constantly occuring in living organisms. Together all these chemical reactions are called metabolism. Each of the metabolic reactions results in the transformation of biomolecules.

A few examples for such metabolic transformations are: removal of CO2 from amino acids making an amino acid into an amine, removal of amino group in a nucleotide base; hydrolysis of a glycosidic bond in a disaccharide, etc. We can list tens and thousands of such examples. Majority of these metabolic reactions do not occur in isolation but are always linked to some other reactions. In other words, metabolites are converted into each other in a series of linked reactions called metabolic pathways. These metabolic pathways are similar to the automobile traffic in a city.

These pathways are either linear or circular. These pathways crisscross each other, i.e., there are traffic junctions. Flow of metabolites through metabolic pathway has a definite rate and direction like automobile traffic. This metabolite flow is called the dynamic state of body constituents. What is most important is that this interlinked metabolic traffic is very smooth and without a single reported mishap for healthy conditions. Another feature of these metabolic reactions is that every chemical reaction is a catalysed reaction. There is no uncatalysed metabolic conversion in living systems. Even CO2 dissolving in water, a physical process, is a catalysed reaction in living systems. The catalysts which hasten the rate of a given metabolic conversation are also proteins. These proteins with catalytic power are named enzymes.

Metabolic pathways can lead to a more complex structure from a simpler structure (for example, acetic acid becomes cholesterol) or lead to a simpler structure from a complex structure (for example, glucose becomes lactic acid in our skeletal muscle). The former cases are called biosynthetic pathways or anabolic pathways. The latter constitute degradation and hence are called catabolic pathways. Anabolic pathways, as expected, consume energy. Assembly of a protein from amino acids requires energy input. On the other hand, catabolic pathways lead to the release of energy. For example, when glucose is degraded to lactic acid in our skeletal muscle, energy is liberated. This metabolic pathway from glucose to lactic acid which occurs in 10 metabolic steps is called glycolysis. Living organisms have learnt to trap this energy liberated during degradation and store it in the form of chemical bonds. As and when needed, this bond energy is utilised for biosynthetic, osmotic and mechanical work that we perform. The most important form of energy currency in living systems is the bond energy in a chemical called adenosine triphosphate (ATP).

At this level, you must understand that the tens and thousands of chemical compounds in a living organism, otherwise called metabolites, or biomolecules, are present at concentrations characteristic of each of them. For example, the blood concentration of glucose in a normal healthy individual is 4.5-5.0 mM, while that of hormones would be nanograms/ mL. The most important fact of biological systems is that all living organisms exist in a steady-state characterised by concentrations of each of these biomolecules. These biomolecules are in a metabolic flux. Any chemical or physical process moves spontaneously to equilibrium. The steady state is a non-equilibirium state. One should remember from physics that systems at equilibrium cannot perform work. As living organisms work continuously, they cannot afford to reach equilibrium. Hence the living state is a non-equilibrium steady-state to be able to perform work; living process is a constant effort to prevent falling into equilibrium. This is achieved by energy input. Metabolism provides a mechanism for the production of energy. Hence the living state and metabolism are synonymous. Without metabolism there cannot be a living state.

The document Nature of Bond Linking Monomers in a Polymer Notes | Study Biology Class 11 - NEET is a part of the NEET Course Biology Class 11.
All you need of NEET at this link: NEET
Join Course