TYPES OF CONTRACT:Now let us discuss various types of contracts. 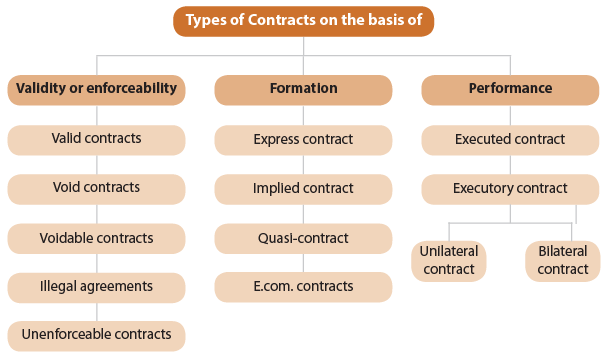 Example: Mr. X agrees to write a book with a publisher. After few days, X dies in an accident. Here the contract becomes void due to the impossibility of performance of the contract.

Example: A contracts with B (owner of the factory) for the supply of 10 tons of sugar, but before the supply is effected, the fire caught in the factory and everything was destroyed. Here the contract becomes void.

It may be added by way of clarification here that when a contract is void, it is not a contract at all but for the purpose of identifying it, it has to be called a [void] contract.3. Voidable Contract: Section 2(i) defines that “an agreement which is enforceable by law at the option of one or more parties thereto, but not at the option of the other or others is a voidable contract”.

This in fact means where one of the parties to the agreement is in a position or is legally entitled or authorized to avoid performing his part, then the agreement is treated and becomes voidable.

Such a right might arise from the fact that the contract may have been brought about by one of the parties by coercion, undue influence, fraud or misrepresentation and hence the other party has a right to treat it as a voidable contract.

At this juncture it would be desirable to know the distinction between a Void Contract and a Voidable Contract. The distinction lies in three aspects namely definition, nature and rights. These are elaborated hereunder:(a) Definition: A void contract cannot be enforced at all. A voidable contract is an agreement which is enforceable only at the option of one of the parties but not at the option of the other. Therefore ‘enforceability’ or otherwise, divides the two types of contracts.(b) Nature: By nature, a void contract is valid at the time when it is made but becomes unenforceable and thus void on account of subsequent developments or events like supervening impossibility, subsequent illegality etc., Repudiation of a voidable contract also renders the contract void. Similarly a contingent contract might become void when the occurrence of the event on which it is contingent becomes impossible.

On the other hand voidable contract would remain valid until it is rescinded by the person who has the option to treat it as voidable. The right to treat it as voidable does not invalidate the contract until such right is exercised. All contracts caused by coercion, undue influence, fraud, misrepresentation are voidable. Generally, a contract caused by mistake is void.(c) Rights: As regards rights of the parties, in the case of a void contract there is no legal remedy for the parties as the contract cannot be performed in any way. In the case of voidable contract the aggrieved party has a right to rescind it within a reasonable time. If it is so rescinded, it becomes void. If it is not rescinded, it is a valid contract.

Difference can be summarized as under:

4. Illegal Contract: It is a contract which the law forbids to be made. The court will not enforce  such a contract but also the connected contracts. All illegal agreements are void but all void agreements are not necessarily illegal.

Example: Contract that is immoral or opposed to public policy are illegal in nature. Similarly, if R agrees with S, to purchase brown sugar, it is an illegal agreement.

Differences can be summarized as:

5. Unenforceable Contract: Where a contract is good in substance but because of some technical defect i.e. absence in writing, barred by limitation etc. one or both the parties cannot sue upon it, it is described as an unenforceable contract.II. On the basis of the formation of contract1. Express Contracts: A contract would be an express contract if the terms are expressed by words or in writing. Section 9 of the Act provides that if a proposal or acceptance of any promise is made in words the promise is said to be express.

Example: A tells B on telephone that he offers to sell his house for Rs. 2 lacs and B in reply informs A that he accepts the offer, this is an express contract.2. Implied Contracts: Implied contracts in contrast come into existence by implication. Most often the implication is by law and or by action. Section 9 of the Act contemplates such implied contracts.

when it lays down that in so far as such proposal or acceptance is made otherwise than in words, the promise is said to be implied.Example: Where a coolie in uniform picks up the luggage of A to be carried out of the railway station without being asked by A and A allows him to do so, it is an implied contract and A must pay for the services of the coolie detailed by him.

Tacit Contracts: The word Tacit means silent. Tacit contracts are those that are inferred through the conduct of parties without any words spoken or written. A classic example of tacit contract would be when cash is withdrawn by a customer of a bank from the automatic teller machine [ATM]. Another example of tacit contract is where a contract is assumed to have been entered when a sale is given effect to at the fall of hammer in an auction sale. It is not a separate form of contract but falls within the scope of implied contracts.

Example: Obligation of finder of lost goods to return them to the true owner or liability of person towhom money is paid under mistake to repay it back cannot be said to arise out of a contract even in its remotest sense, as there is neither offer and acceptance nor consent. These are said to be quasi-contracts.4. E-Contracts: When a contract is entered into by two or more parties using electronics means, such as e-mails is known as e-commerce contracts. In electronic commerce, different parties/persons create networks which are linked to other networks through EDi - Electronic Data Inter change. This helps in doing business transactions using electronic mode. These are known as EDI contracts or Cyber contracts or mouse click contracts.

III. On the basis of the performance of the contract1. Executed Contract: The consideration in a given contract could be an act or forbearance. When the act is done or executed or the forbearance is brought on record, then the contract is an executed contract.

Example: When a grocer sells a sugar on cash payment it is an executed contract because both the parties have done what they were to do under the contract.2. Executory Contract: In an executory contract the consideration is reciprocal promise or obligation. Such consideration is to be performed in future only and therefore these contracts are described as executory contracts.

Example: Where G agrees to take the tuition of H, a pre-engineering student, from the next month and H in consideration promises to pay G Rs. 1,000 per month, the contract is executory because it is yet to be carried out.

Unilateral or Bilateral are kinds of Executory Contracts and are not separate kinds.(a) Unilateral Contract: Unilateral contract is a one sided contract in which one party has performed his duty or obligation and the other party’s obligation is outstanding.

Example: M advertises payment of are ward of Rs. 5000 to any one who finds his missing boy and brings him. As soon as B traces the boy, there comes into existence an executed contract  because B has performed his share of obligation and it remains for M to pay the amount of reward to B. This type of Executory contract is also called unilateral contract.(b) Bilateral Contract: A Bilateral contract is one where the obligation or promise is outstanding on the part of both the parties.Example: A promises to sell his plot to B for Rs. 1 lacs cash down, but B pays only Rs. 25,000 as earnest money and promises to pay the balance on next Sunday. On the other hand A gives the possession of plot to B and promises to execute a sale deed on the receipt of the whole amount. The contract between the A and B is executory because there remains something to be done on both sides. Executory contracts are also known as Bilateral contracts.