The generic term ‘network’ refers to a group of entities (objects, people, etc.) which are connected to one another. A network, therefore, allows material or immaterial elements to be circulated among all of these entities, based on welldefined rules.Network: A group of computers and peripheral devices connected to each other form a network. The smallest possible network is two computers connected together.Networking: Implementing tools and tasks for linking computers so that they can share resources over the network is called networking.A computer network is useful for several distinct purposes:

Networks are also used for standardizing applications. Here’s a glimpse of the advantages that such systems have:

The different types of networks generally have the following points in common:

Following is the list of hardware’s required to setup a computer network.

(i) Network Cables: Network cables are used to connect computers.

(ii) Distributors: A computer can be connected to another through a serial port but if we need to connect many computers to produce a network, one has to use a central body to which other computers, printers, scanners etc. can be connected and then this body will manage or distribute network. This hardware is called the distributor.

(iii) Router: A router is a type of device which acts as the central point in a network. A router has holes called ports and computers and other devices are connected to a router using network cables.

(iv) Network Card: Without this device, a computer cannot be connected over a network. It is also known as network adapter or Network Interface Card (NIC). Most branded computers have network cards preinstalled. Network cards are of two types: Internal and External Network Cards.

Generally there are two types of networks:

These two types of networks have different capabilities.Which type of network is to be installed depends on the following criteria:

A computer network is made of computers which are linked to one another with communication lines (network cables, etc.) and hardware elements (network adapters, as well as other equipments for ensuring that data travels correctly). The physical arrangement such as the spatial configuration of the network is called the physical topology.

Different kinds of topologies are the following:

Bus topology is the simplest way to organize a network. In this topology, all computers are linked to the same transmission line by using a cable, usually coaxialy.

The advantages of this topology are:

Disadvantages of this topology, it is highly vulnerable, that is if one of the connections is defective, the whole network is affected.

In this topology network, each computer takes turns communicating, creating a loop of computers in which each of them  has its turn to speak” one after another.

Different types of (private) networks are distinguished based on their size (in terms of the number of machines), their data transfer speed, and their reach. Private networks are networks that belong to a single organization.Generally there are three categories of such networks:

LAN stands for Local Area Network. It is a group of computers which  belong to the same organization, and are linked within a small geographic area using a network, and often the same technology (the most widespread being Ethernet).A local area network is a network in its simplest form. Data transfer speeds over a local area network can reach up to 10 Mbps (such as for an Ethernetnetwork) and 1 Gbps (as with FDDI or Gigabit Ethernet).Two different operating modes can be defined:

(iii) WAN (Wide Area Network)A WAN (Wide Area Network or extended network) connects multiple LANs to one another over large geographic distances. The speed available on a WAN varies depending on the cost of the connections (which increases with distance) and may be low. The most well-known WAN is the Internet.

An intranet is a private network which utilizes Internet-type tools, but are available only within that organization. For large organizations, the intranet provides an easy access mode to corporate information for employees.With the advancements made in browser-based software for the Internet, many private organizations are implementing intranets.

VPN uses a technique known as tunneling to transfer data securely on the Internet to a remote access server on your workplace network.VPN helps user save money by using the public Internet instead of making long distance phone calls to connect securely with your private network. There are two ways to create a VPN connection, by dialing an Internet service provider (ISP), or connecting directly to the Internet.

Some important protocols and their jobs are shown in the table given below: 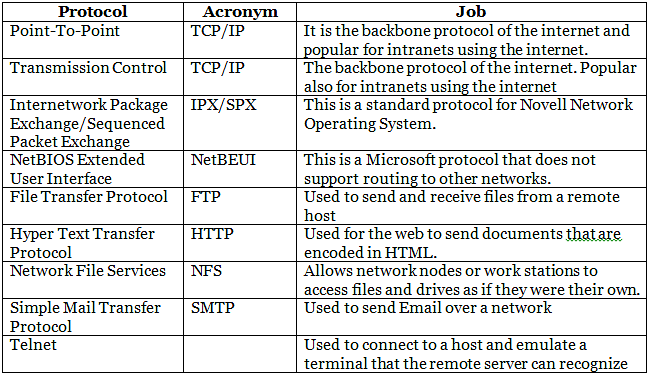 ProtocolsNetwork protocols are the standards that allow computers to communicate. A protocol defines how computers identify one another on a network, the form that the data should take in transit, and how this information is processed once it reaches its final destination.

Similarities between Internet and Intranet

Differences between Internet and Intranet

TransceiversTransceivers are used to connect nodes to various Ethernet media. Most computers and network interface cards containing a built-in 10BASE-T or 10BASE2 transceiver, to get connected directly to Ethernet without requiring any external transceiver.

Network Interface CardsNetwork interface cards, commonly referred to as NICs, are used to connect a PC to a network. The NIC provides a physical connection between the networking cable and the computer’s internal bus.

Hubs/RepeatersHubs/repeaters are used to connect together two or more Ethernet segments of any media type. Hubs provide the signal amplification required to allow a segment to be extended to a greater distance. A hub takes any incoming signal and repeats it out  to all other ports.

BridgesThe function of a bridge is to connect separate networks together. Bridges connect different network types (such as Ethernet and Fast Ethernet) or networks of the same type. Bridges map the Ethernet addresses of the nodes residing on each network segment and allows only necessary traffic to pass through the bridge. When a packet is received by the bridge, the bridge determines the destination and source segments. If the segments are the same, the packet is dropped ‘filtered’.If the segments are different, then the packet is forwarded to the correct segment.

Ethernet SwitchesEthernet switches are an expansion of the concept in Ethernet bridging. LAN switches can link four, six, ten or more networks together, and have two basic architectures: cut-through and store-andforward.

RoutersRouters filter out network traffic by specific protocol rather than by packet address. Routers also divide networks logically instead of physically. An IP router can divide a network into various subnets so that only traffic destined for particular IP addresses can pass between segments.