The document Nomenclature of Functional Groups Notes | EduRev is a part of the Class 11 Course Chemistry Class 11.
All you need of Class 11 at this link: Class 11

Nomenclature of Organic Compounds having Functional Group(s)A functional group, as defined earlier, is an atom or a group of atoms bonded together in a unique manner which is usually the site of chemical reactivity in an organic molecule.

Compounds having the same functional group undergo similar reactions. For example, CH3OH, CH3CH2OH, and (CH3)2CHOH — all having -OH functional group liberate hydrogen on reaction with sodium metal. The presence of functional groups enables systematisation of organic compounds into different classes.

The –R, C6H5-, halogens (F, Cl, Br, I), –NO2, alkoxy (–OR) etc. are always prefix substituents. Thus, a compound containing both an alcohol and a keto group is named as hydroxyalkanone since the keto group is preferred to the hydroxyl group.

If more than one functional group of the same type are present, their number is indicated by adding di, tri, etc. before the class suffix. In such cases the full name of the parent alkane is written before the class suffix. For example CH2(OH)CH2(OH) is named as ethane–1,2–diol. However, the ending – ne of the parent alkane is dropped  in the case of compounds having more than  one  double or triple bond; for example, CH2=CH-CH=CH2 is named as buta–1,3–diene.

Some Functional Groups and Classes of Organic Compounds 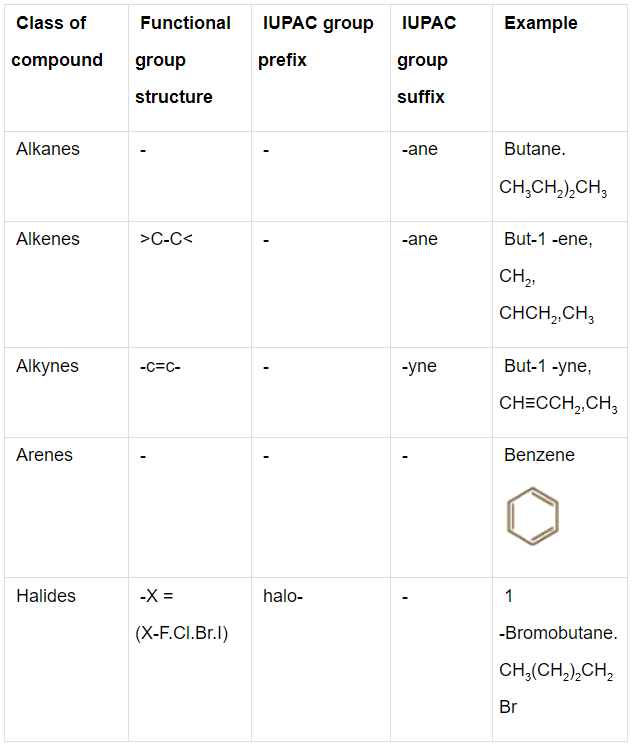 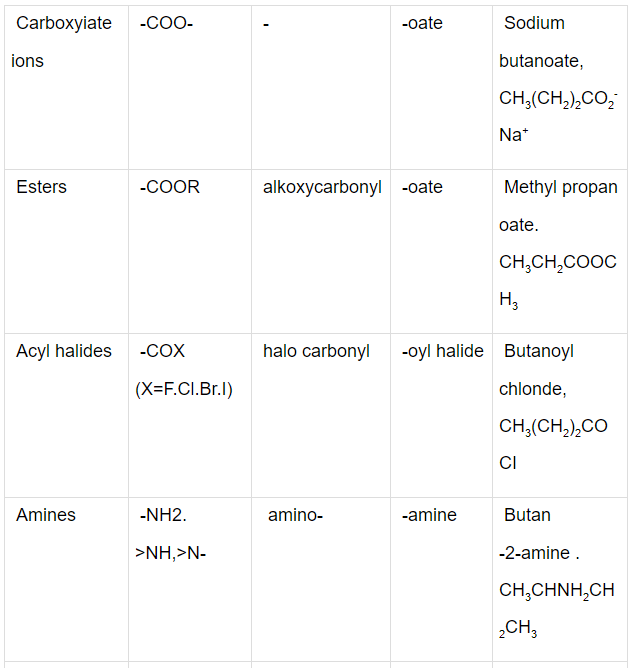 Example with SolutionEx. 1. Write the IUPAC names of the compounds i-iv from their given structures.

Sol. The functional group present is an alcohol (OH). Hence the suffix is ‘-ol’.

- The -OH is on carbon atom 3. In addition, a methyl group is attached at 6th carbon.

Hence, the systematic name of this compound is 6-Methyloctan-3-ol.

Ex. 2. Derive the structure of (i) 2-Chlorohexane, (ii) Pent-4-en-2-ol, (iii) 3- Nitrocyclohexene, (iv) Cyclohex-2-en-1-ol, (v) 6-Hydroxyheptanal.Sol. (i) ‘hexane’ indicates the presence of 6 carbon atoms in the chain. The functional group chloro is present at carbon 2. Hence, the structure of the compound is CH3CH2CH2CH2CH(Cl)CH3.(ii) ‘pent’ indicates that parent hydrocarbon contains 5 carbon atoms in the chain. ‘en’ and ‘ol’ correspond to the functional groups C=C and -OH at carbon atoms 4 and 2 respectively. Thus, the structure isCH2=CHCH2CH (OH)CH3.(iii) Six membered ring containing a carbon-carbon double bond is implied by cyclohexene, which is numbered as shown in (I). The prefix 3-nitro means that a nitro group is present on C-3. Thus, complete structural formula of the compound is (II). Double bond is suffixed functional group whereas NO2 is prefixed functional group therefore double bond gets preference over –NO2 group: 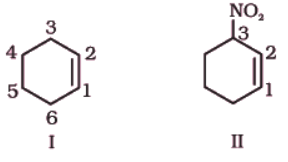 (iv)  ‘1-ol’ means that a -OH group is present at C-1. OH is suffixed functional group and gets preference over C=C bond. Thus the structure is as shown in (II):

(v) ‘heptanal’ indicates the compound to be an aldehyde containing 7 carbon atoms in the parent chain. The ‘6-hydroxy’ indicates that -OH group is present at carbon 6. Thus, the structural formula of the compound is: CH3CH(OH)CH2CH2CH2CH2CHO. Carbon atom of –CHO group is included while numbering the carbon chain.

If benzene ring is disubstituted, the position of substituents is defined by numbering the carbon atoms of the ring such that the substituents are located at the lowest numbers possible. For example, the compound(b) is named as 1,3-dibromobenzene and not as 1,5-dibromobenzene. 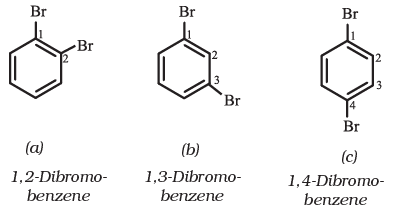 In the trivial system of nomenclature the terms ortho (o), meta (m) and para (p) are used as prefixes to indicate the relative positions 1,2 - ;1,3- and 1,4- respectively. Thus, 1,3-dibromobenzene (b) is named as m-dibromobenzene (meta is abbreviated as m-) and the other isomers of dibromobenzene 1,2-(a) and 1,4-(c), are named as ortho (or just o-) and para (or just p-)-dibromobenzene, respectively.For tri - or higher substituted benzene derivatives, these prefixes cannot be used and the compounds are named by identifying substituent positions on the ring by following the lowest locant rule. In some cases, common name of benzene derivatives is taken as  the base compound.Substituent of the base compound is assigned number1 and then the direction of numbering is chosen such that the next substituent gets the lowest number. The substituents appear in the name in alphabetical order. Some examples are given below. 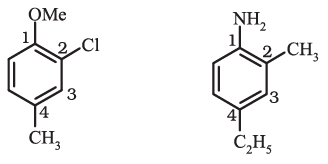 3,4-DimethylphenolWhen a benzene ring is attached to an alkane with a functional  group, it is considered  as substituent, instead of a parent. The name for benzene as substituent is phenyl (C6H5-, also abbreviated as Ph).