Figure below shows a control surface that includes a normal shock.

Continuity equation can be written as

where G is the mass velocity kg/ m2 s, and

From momentum equation, we can write

where p + ρV2 is termed as Impulse Function .

The energy equation is written as

where h0 is stagnation enthalpy.

From the second law of thermodynamics, we know

To calculate the entropy change, we have

For an ideal gas

For constant specific heat, the above equation can be integrated to give

If all the properties at state 1 (upstream of the shock) are known, then we have six unknowns

in these five equations.

For an ideal gas with constant specific heats,

Thus, we have the situation of six equations and six unknowns.

So, for a frictional flow, we have the situation of six equations and seven unknowns. 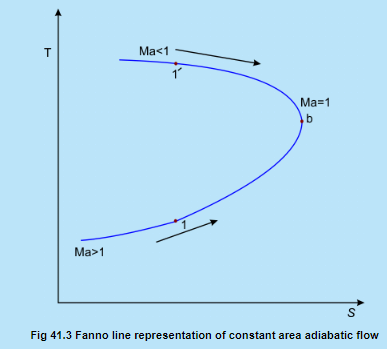