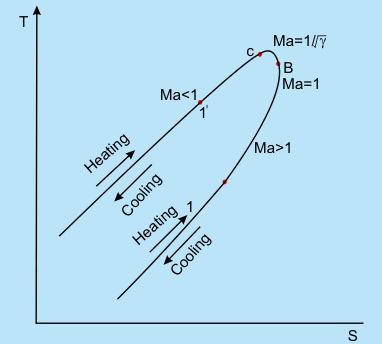 The Physical Picture of the Flow through a Normal Shock Fig 41.5  Intersection of Fanno line and Rayleigh line and the solution for normal shock condition

Calculation of Flow Properties Across a Normal Shock

Introducing the Mach number in momentum equation, we have

Rearranging this equation for the static pressure ratio across the shock wave, we get

Substituting Eqs (40.12) and (40.13) into Eq. (40.10) yields the following relationship for the Mach numbers upstream and downstream of a normal shock wave:

Then, solving this equation for Ma2 as a function of  Ma1 we obtain two solutions. One solution is trivial Ma2 =  Ma1 , which signifies no shock across the control volume. The other solution is

Equations (40.12) and (40.13) also show that there would be no pressure or temperature increase across the shock. In fact, the shock wave corresponding to  Ma1  = 1 is the sound wave across which, by definition, pressure and temperature changes are infinitesimal. Therefore, it can be said that the sound wave represents a degenerated normal shock wave. The pressure, temperature and Mach number (Ma2) behind a normal shock as a function of the Mach number Ma1, in front of the shock for the perfect gas can be represented in a tabular form (known as Normal Shock Table). The interested readers may refer to Spurk[1] and Muralidhar and Biswas[2] 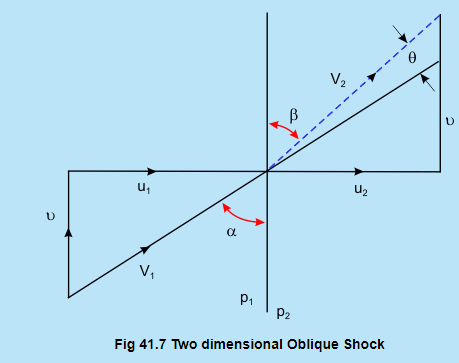 For analyzing flow through such a shock, it may be considered as a normal shock on which a velocity

(parallel to the shock) is superimposed. The change across shock front is determined in the same way as for the normal shock. The equations for mass, momentum and energy conservation , respectively, are 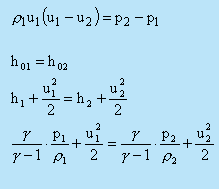 These equations are analogous to corresponding equations for normal shock. In addition to these, we have

Note that although    Ma2   sin β < 1,  Ma1  might be greater than 1. So the flow behind an oblique shock may be supersonic although the normal component of velocity is subsonic.

In order to obtain the angle of deflection of flow passing through an oblique shock, we use the relation

Sometimes, a design is done in such a way that an oblique shock is allowed instead of a normal shock. The losses for the case of oblique shock are much less than those of normal shock.This is the reason for making the nose angle of the fuselage of a supersonic aircraft smal