The document Chapter Notes - Correlation Commerce Notes | EduRev is a part of the Commerce Course Statistics for Economics - Class XI.
All you need of Commerce at this link: Commerce

Correlation studies the relationship between tow variables in which change in the value of one variable causes change in the other variable. It is denoted by letter ‘r’.

Positive correlation: When both variables move in the same direction. If one increases, other also increases and vice-versa.

Negative correlation: - When two variables move in the opposite direction, they are negatively correlated.

Linear Correlation: - When two variables change in a constant proportion.

Non- linear correlation: - When two variables do not change in the same proportion.

Multiple Correction – Relationship between three or more than three variables are studied.

(b) Perfect negative correlation – When values of both the variables change at a constant ratio in opposite direction. Value of coefficient of correlation is -1

2. Absence of correlation : When there is no relation between the variables r = 0

3. Limited degree correlation : The value of r varies between more than O and less than 1 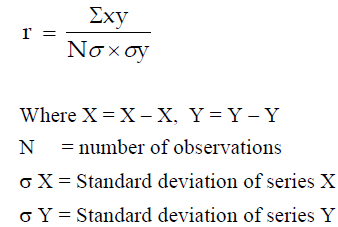 1. Helps to find direction of correlation

1. Based on large number of assumptions

In case of non repeated ranks :-

1. Simple and easy to calculate

2. Not affected by extreme values

1. Not Suitable for grouped data

2. Not based on original values of observations.

(C) Scatter Diagram – Given data are plotted on a graph paper. By looking at the scatter of

points on the graph, degree and direction of two variables can be found.

2. Not affected by size of extreme values.