1. Dispersion refers to the variation of the items around an average.

a) To determine the reliability of an average.

b) To compare the variability of two or more series.

c) It serves the basis of other statistical measures such as correlation etc.

d) It serves the basis of statistical quality control.

Properties of good measure of Dispersion

a) It should be easy to understand.

b) Easy to calculate.

d) Based on all observations.

e) Should not be unduly affected by extreme values.

Measures of Dispersion may be either absolute measures or relative measure.

Absolute Measures of Dispersion are

Relative Measures of Dispersion are

a) Coefficient of Range

b) Coefficient of Quartile Deviation

It is the difference between the largest and smallest value of distribution.

1. It is simple to understand and easy to calculate.

2. It is widely used in statistical quality control.

1. It is affected by extreme values in the series.

2. It cannot be calculated in case of open end series.

Quartile deviation is half of inter quartile range. 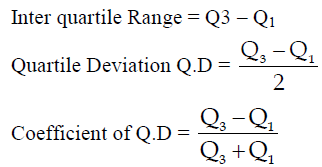 3. Can be computed in open ended series.

1. Not based on all observations

2. It is influenced by change in sample and suffers from instability.

of various items from Mean or Median. 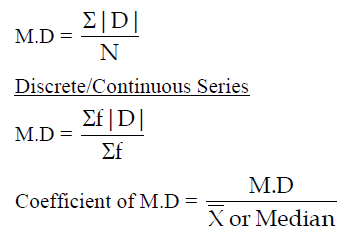 1. Based on all observations.

2. It is less affected by extreme values.

3. Simple to understand and easy to calculate.

1. It ignores ± signs in deviations.

2. It is difficult to compute when deviations comes in fractions.

It is defined as the root mean square deviation.

1. Value of its deviation is taken from Arithmetic Mean.

2. + and – signs of deviations taken from mean are not ignored. 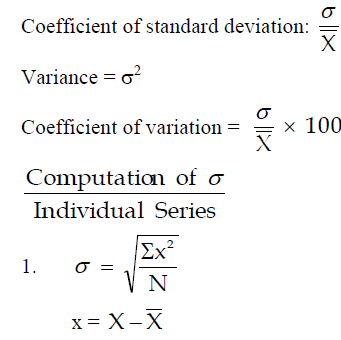 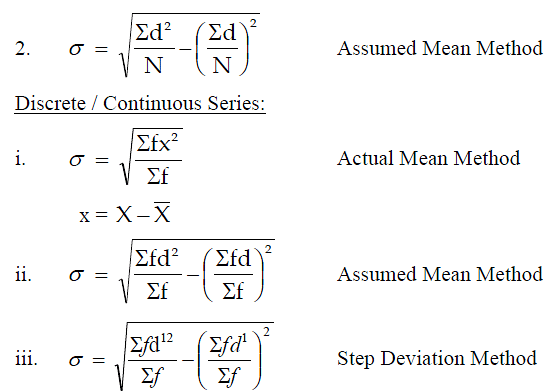 ii. Based on all observations

i. Difficult to understand and compute.

It is a graphical method of studying dispersion.

with percentage of other items such as profit, income etc.