On 20th June 2018, Australian golfer Peter Thomson, passed away after fighting Parkinson’s disease, at his residence in Melbourne, Australia. iii. The World Golf Hall of Fame named him “the thinking man’s golfer”. He won the Victorian Amateur Championship in 1949.

Some important stadiums in India:

On 21st June 2018, World Music Day was celebrated all over the world.

ii. It is celebrated every year on 21 June. On Music Day people play music in public areas. Free concerts are also organized.

iii. These celebrations were initiated by the French Minister of Culture, Jack Lang, and by Maurice Fleuret. It was first celebrated in Paris in 1982. This day is celebrated in 120 countries throughout the world.

Some important temples in India:

On 21st June 2018, 4th International Yoga Day was celebrated all over the world. 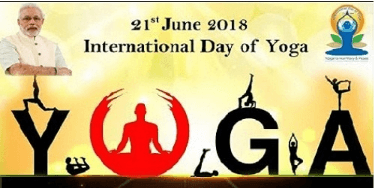 i. The main event of 4th International Yoga Day celebrations (IDY-2018) was held at Forest Research Institute in Dehradun, Uttrakhand.

ii. Prime Minister Narendra Modi participated in the event at Dehradun. Nearly 50,000 people took part in the activities there.

iv. The theme for International Yoga Day 2018 is: “Yoga for peace”. Yoga demonstrations were also held in several foreign countries.

v. India’s Permanent Mission to the UN celebrated International Yoga Day at the North Lawn in the UN Headquarters in New York.

vi. In Sri Lanka, an event was organized by Indian High commission in Colombo and consulates located at Jaffna, Hambantota and Kandy.

vii. In Nepal, monks and local citizens did Yoga exercises at 12,500 feet in Muktinath.

ix. Indian President Ram Nath Kovind, who is on a three-nation visit took part in the Yoga Day celebration in Paramaribo, Suriname, along with Suriname President Desire Delano Bouterse.

Some important dams in India: