From the above readings we can determine the no-load equivalent circuit: 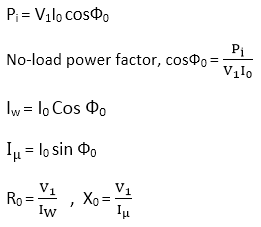 Where X0 is the inductive reactance, IW is the core loss current, Iμ is the magnetizing current.Short Circuit Test

The high voltage winding is supplied at the reduced voltage from a variable voltage supply. This supply voltage is gradually increased until full-load primary current flows. When the rated full load current flows in the primary winding, then it will also flow in the secondary winding by the transformer action.The readings of the instruments on the short circuit test are as follows:

The equivalent resistance of the transformer referred to primary

When short circuit test is performed only on one side the equivalent circuit constants referred to another side can also be calculated as follows: