The document Operating Costing - Overheads B Com Notes | EduRev is a part of the B Com Course Cost Accounting.
All you need of B Com at this link: B Com

Deciphering Operating CostsBusinesses have to keep track of operating costs as well as the costs associated with non-operating activities, such as interest expenses on a loan. Both costs are accounted for differently in a company's books, allowing analysts to determine how costs are associated with revenue-generating activities and whether or not the business can be run more efficiently.Generally speaking, a company’s management will seek to maximize profits for the company. Because profits are determined both by the revenue that the company earns and the amount the company spends in order to operate, profit can be increased both by increasing revenue and by decreasing operating costs. Because cutting costs generally seems like an easier and more accessible way of increasing profits, managers will often be quick to choose this method.However, trimming operating costs too much can reduce a company’s productivity and, thus, its profit as well. While reducing any particular operating cost will usually increase short-term profits, it can also hurt the company’s earnings in the long-term. For example, if a company cuts its advertising costs its short-term profits will likely improve, as it is spending less money on operating costs.However, by reducing its advertising, the company might also reduce its capacity to generate new business and earnings in the future could suffer. Ideally, companies look to keep operating costs as low as possible while still maintaining the ability to increase sales.Operating Costs ComponentsWhile operating costs generally do not include capital outlays, they can include many components of operating expenses including:

Operating costs can include the cost of goods sold, which are the expenses directly tied to the production of goods and services. Some of the costs include:

A business’s operating costs are comprised of two components, fixed costs and variable costs, which differ in important ways.Fixed CostsA fixed cost is one that does not change with an increase or decrease in sales or productivity and must be paid regardless of the company’s activity or performance. For example, a manufacturing company must pay rent for factory space, regardless of how much it is producing or earning. While it can downsize and reduce the cost of its rent payments, it cannot eliminate these costs, and so they are considered to be fixed. Fixed costs generally include overhead costs, insurance, security, and equipment.Fixed costs can help in achieving economies of scale, as when many of a company’s costs are fixed the company can make more profit per unit as it produces more units. In this system, fixed costs are spread out over the number of units produced, making production more efficient as production increases by reducing the average per-unit cost of production. Economies of scale can allow large companies to sell the same goods as smaller companies for lower prices.The economies of scale principle can be limited in that fixed costs generally need to increase with certain benchmarks in production growth. For example, a manufacturing company that increases its rate of production over a specified period will eventually reach a point where it needs to increase the size of its factory space in order to accommodate the increased production of its products.Variable CostsVariable costs, like the name implies, are comprised of costs that vary with production. Unlike fixed costs, variable costs increase as production increases and decrease as production decreases. Examples of variable costs include raw material costs, payroll, and the cost of electricity. For example, in order for a fast-food restaurant chain that sells French fries to increase its fry sales, it will need to increase its purchase orders of potatoes from its supplier.It's sometimes possible for a company to achieve a volume discount or "price break" when purchasing supplies in bulk, wherein the seller agrees to slightly reduce the per-unit cost in exchange for the buyer’s agreement to regularly buy the supplies in large amounts. As a result, the agreement might diminish the correlation somewhat between an increase or decrease in production and an increase or decrease in the company’s operating costs. For example, the fast-food company may buy its potatoes at $0.50 per pound when it buys potatoes in amounts of less than 200 pounds.However, the potato supplier may offer the restaurant chain a price of $0.45 per pound when it buys potatoes in bulk amounts of 200 to 500 pounds. Volume discounts generally have a small impact on the correlation between production and variable costs and the trend otherwise remains the same.Typically, companies with a high proportion of variable costs relative to fixed costs are considered to be less volatile, as their profits are more dependent on the success of their sales. In the same way, the profitability and risk for the same companies are also easier to gauge.Semi-Variable CostsIn addition to fixed and variable costs, it is also possible for a company’s operating costs to be considered semi-variable (or “semi-fixed.") These costs represent a mixture of fixed and variable components and, thus, can be thought of as existing between fixed costs and variable costs. Semi-variable costs vary in part with increases or decreases in production, like variable costs, but still exist when production is zero, like fixed costs. This is what primarily differentiates semi-variable costs from fixed costs and variable costs.An example of semi-variable costs is overtime labor. Regular wages for workers are generally considered to be fixed costs, as while a company’s management can reduce the number of workers and paid work-hours, it will always need a workforce of some size to function. Overtime payments are often considered to be variable costs, as the number of overtime hours that a company pays its workers will generally rise with increased production and drop with reduced production. When wages are paid based on conditions of productivity allowing for overtime, the cost has both fixed and variable components and are therefore considered to be semi-variable costs.Limitations of Operating CostsAs with any financial metric, operating costs must be compared over multiple reporting periods to get a sense of any trend. Companies sometimes can cut costs for a particular quarter thus inflating their earnings temporarily. Investors must monitor costs to see if they're increasing or decreasing over time while also comparing those results to the performance of revenue and profit.Example and Solution.Operating Costing Problem 1:
Union Transport Company supplies the following details in respect of a truck of 5-tonne capacity:

The truck carries goods to and from city covering a distance of 50 miles each way.While going to the city freight is available to the extent of full capacity.Assuming that the truck runs on an average 25 days a month, work out:(i) Operating cost per tonne-mile, and(ii) Rate per ton per trip that the company should charge if profit of 50% on freightage is to be earned.Solution. Operating Costing Problem 2:The Kangaroo Transport operates a fleet of lorries. The records for lorry L-14 reveal the following information for September, 1990: 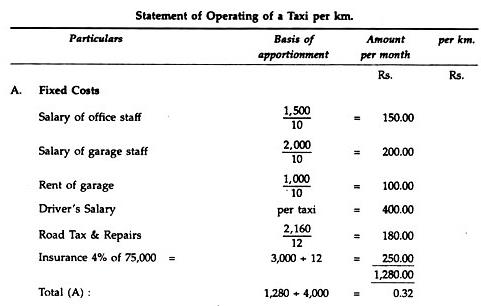 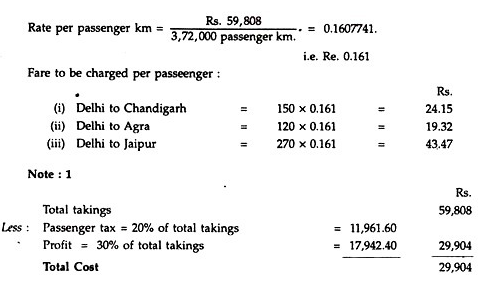