The document Opto-Electronic Devices - Semiconductor Devices, CSIR-NET Physical Sciences Physics Notes | EduRev is a part of the Physics Course Physics for IIT JAM, UGC - NET, CSIR NET.
All you need of Physics at this link: Physics

P-n junctions are an integral part of several optoelectronic devices. These include photodiodes, solar cells light emitting diodes (LEDs) and semiconductor lasers. In this section, we discuss the principle of operation of these devices and derive equations for key parameters.

This striking difference is further illustrated with Figure 4.6.1 and can be explained based on the energy and momentum conservation required in the electron-photon interaction. The direct bandgap semiconductor, which has a vertically aligned conduction and valence band, is shown in Figure 4.6.1(a). Absorption of a photon is obtained if an empty state in the conduction band is available for which the energy and momentum equals that of an electron in the valence band plus that of the incident photon. Photons have little momentum relative of their energy since they travel at the speed of light. The electron therefore makes an almost vertical transition on the E-k diagram.

For an indirect bandgap semiconductor, the conduction band is not vertically aligned to the valence band as shown in Figure 4.6.1(b). Therefore a simply interaction of an incident photon with an electron in the valence band will not provide the correct energy and momentum corresponding to that of an empty state in the conduction band. As a result absorption of light requires the help of another particle, namely a photon. Since a phonon, i.e a particle associated with lattice vibrations, has a relatively low velocity close to the speed of sound in the material, it has a small energy and large momentum compared to that of a photon. Conservation of both energy and momentum can therefore be obtained in the absorption process if a phonon is created or an existing phonon participates. The phonon assisted absorption processes are illustrated with Figure 4.6.1(b) and (c). Figure 4.6.1(b) illustrates the absorption of a photon aided by the simultaneous absorption of a phonon, while Figure 4.6.1(c) depicts the absorption of a photon, which results in the emission of a phonon. The minimum photon energy that can be absorbed is slightly below the bandgap energy in the case of phonon absorption and has to be slightly above the bandgap energy in the case of phonon emission. Since the absorption process in an indirect bandgap semiconductor involves a phonon in addition to the electron and photon, the probability of having an interaction take place involving all three particles will be lower than a simple electron-photon interaction in a direct bandgap semiconductor. As a result one finds that absorption is much stronger in a direct bandgap material.

Photodiodes and crystalline solar cells are essentially the same as the p-n diodes, which have been described in this chapter. However, the diode is exposed to light, which yields a photocurrent in addition to the diode current so that the total diode current is given by: 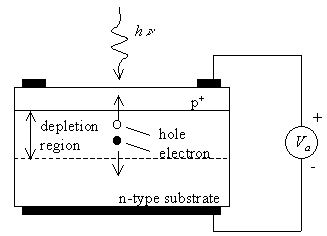 Figure 4.6.2 : Motion of photo-generated carriers in a p-n photodiode.

This photocurrent is obtained by integrating the generation rate (2.8.12) over the absorption region with thickness, d. The photocurrent is further reduced if photo-generated electron-hole pairs recombine within the photodiode instead of being swept into the regions where they are majority carriers.

The dark current is the current through the diode in the absence of light. This current is due to the ideal diode current, the generation/recombination of carriers in the depletion region and any surface leakage, which occurs in the diode. The dark current obviously limits the minimum power detected by the photodiode, since a photocurrent much smaller than the dark current would be hard to measure.

However, the true limitation is the shot noise generated by the current through the diode. The shot noise as quantified by the average of the square of the noise current is given by:

Solar cells are typically illuminated with sunlight and are intended to convert the solar energy into electrical energy. The solar energy is in the form of electromagnetic radiation, more specifically "black-body" radiation. The sun’s spectrum is consistent with that of a black body at a temperature of 5800 K. The radiation spectrum has a peak at 0.8 eV. A significant part of the spectrum is in the visible range of the spectrum (400 - 700 nm). The power density is approximately 100 mW/cm2.

Only part of the solar spectrum actually makes it to the earth's surface. Scattering and absorption in the earth's atmosphere, and the incident angle affect the incident power density. Therefore, the available power density depends on the time of the day, the season and the latitude of a specific location.

Of the solar light, which does reach a solar cell, only photons with energy larger than the energy bandgap of the semiconductor generate electron-hole pairs. In addition, one finds that the voltage across the solar cell at the point where it delivers its maximum power is less than the bandgap energy in electron volt. The overall power-conversion efficiency of single-crystalline solar cells ranges from 10 to 30 % yielding 10 to 30 mW/cm2.

The calculation of the maximum power of a solar cell is illustrated by Figure 4.6.3 and Figure 4.6.4. The sign convention of the current and voltage is shown as well. It considers a current coming out of the cell to be positive as it leads to electrical power generation. The power generated depends on the solar cell itself and the load connected to it. As an example, a resistive load is shown in the diagram below. 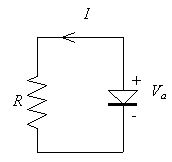 The current and the power as function of the forward bias voltage across the diode are shown in Figure 4.6.4 for a photocurrent of 1 mA: 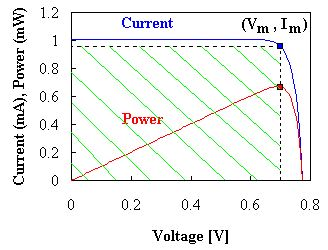 Figure 4.6.4: Current-Voltage (I-V) and Power-Voltage (P-V) characteristics of a p-n diode solar cell with Iph= 1 mA and Is = 10-10 A. The crosshatched area indicates the power generated by the solar cell. The markers indicate the voltage and current, Vm and Im, for which the maximum power, Pm is generated.

We identify the open-circuit voltage, Voc, as the voltage across the illuminated cell at zero current. The short-circuit current, Isc, is the current through the illuminated cell if the voltage across the cell is zero. The short-circuit current is close to the photocurrent while the open-circuit voltage is close to the turn-on voltage of the diode as measured on a current scale similar to that of the photocurrent.

The fill factor of the solar cell is defined as the ratio of the maximum power of the cell to the product of the open-circuit voltage, Voc, and the short-circuit current, Isc, or:

Laser diodes are very similar to LEDs since they also consist of a p-n diode with an active region where electrons and holes recombine resulting in light emission. However, a laser diode also contains an optical cavity where stimulated emission takes place. The laser cavity consists of a waveguide terminated on each end by a mirror. As an example, the structure of an edge-emitting laser diode is shown in Figure 4.6.5. Photons, which are emitted into the waveguide, can travel back and forth in this waveguide provided they are reflected at the mirrors. 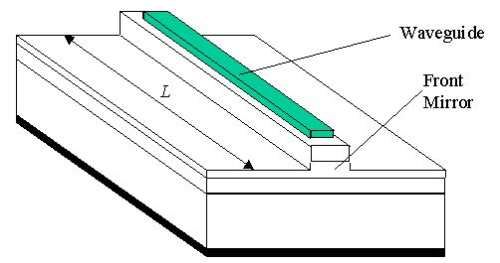 The light in the waveguide is amplified by stimulated emission. Stimulated emission is a process where a photon triggers the radiative recombination of an electron and hole thereby creating an additional photon with the same energy and phase as the incident photon. This process is illustrated with Figure 4.6.6. This "cloning" of photons results in a coherent beam.

Figure 4.6.6: Stimulated emission of a photon.

The stimulated emission process yields an increase in photons as they travel along the waveguide. Combined with the waveguide losses, stimulated emission yields a net gain per unit length, g. The number of photons can therefore be maintained if the roundtrip amplification in a cavity of length, L, including the partial reflection at the mirrors with reflectivity R1 and R2 equals unity.

This yields the following lasing condition:

where hn is the energy per photon. The factor, h, indicates that only a fraction of the generated photons contribute to the output power of the laser as photons are partially lost through the other mirror and throughout the waveguide. 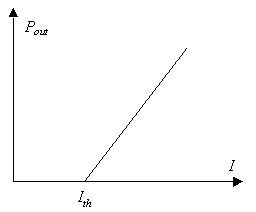 Figure 4.6.7: Output power from a laser diode versus the applied current.