In many problems in physics, the potential is central, namely, V = V (r); this means that the potential is spherically symmetric, and is not a function of θ or φ. In this type of systems - the best representative may be the hydrogen atom to be discussed shortly, it is best to work in spherical coordinates, r, θ, φ.

In spherical coordinates, the laplacian becomes

Comparing to Equation 17, we see that the last two terms of the laplacian are equal to

Thus, we can write the Hamiltonian as

and the time-independent Schro¨dinger equation is

We already know simultaneous eigenfunctions of L2 and Lz : these are of course the spherical harmonics, Ylm(θ, φ). Thus, a full solution to Schro¨dinger equation can be written as

REl (r) is a radial function of r, which we need to ﬁnd. The subscripts E and l mark the fact that in general, we obtain diﬀerent functions for diﬀerent values of the energy(E ) and the orbital angular momentum quantum number l. It is independent, though, on the magnetic quantum number m, as can be seen by inserting this solution into Schro¨dinger equation (in which the operator L2 appears explicitly, but not Lz ).

We may put the solution in Equation (62) in Schro¨dinger equation (60), and use the fact that

To be physically acceptable, the wave functions must be square integrable, and normalized to 1:

.We already know that the spherical part, Ylm(θ, φ) is normalized; see Equation 42. Thus, the radial part of the eigenfunctions must satisfy the normalization condition

We may further simplify Equation 63 by changing a variable,

(68)is an eﬀective potential; in addition to the interaction potential, V (r) it contains a repulsive centrifugal barrier,

With the inclusion of this potential, Equation 67 has an identical form to the 1-d (timeindependent) Schro¨dinger equation. The only diﬀerence is that it is physically meaningful only for r > 0, and we must provide the boundary condition at r = 0. The boundary conditions are provided by the physical requirement that the function REl (r) remains ﬁnite at the origin, r = 0. Since REl (r) = uEl (r)/r, this implies

Perhaps the most important demonstration of the above analysis (and of quantum mechanics in general) is the ability to predict the energy levels and wave functions of the hydrogen atom. This is the simplest atom, that contains one proton and one electron. The proton is heavy (mp/me = 1836) and is essentially motionless - we can assume it being at the origin, r = 0). The proton has a positive charge +q, and the electron a negative charge, −q. We can therefore use Coulumb’s law to calculate the potential energy:

Before proceeding to solve this equation, we note the following. At r → ∞, Vef f (r) → 0.This means that for any value of positive energy (E > 0), one could ﬁnd an acceptable eigenfunction uEl (r). Therefore, there is a continuous spectrum for E > 0, describing scattering between electron and proton (this will be dealt with in next year’s QM...). We focus here on solutions for which E < 0. These are called bound states.We proceed by some change of variables: We write

We proceed along lines which are somewhat similar to those taken in deriving the SHO.We begin by examining the asymptotic behavior. We note that when ρ → ∞, Equation 75 is approximately d2uEl /dρ2 ≈ uEl , which admits the general solution

On the other hand, as ρ → 0, the centrifugal term dominates (apart when l = 0, but, as will be seen, the result is valid there too), and one can write

with the general solution

for small ρ.This discussion motivates another change of variables, writing

where v(ρ) ≡ vEl (ρ), and the subscripts E l are omitted for clarity.With this change of variables, we have

We search for solution v(ρ) is terms of power series:

We can thus write:

similar to the analysis of the SHO, we insert these results into Equation 77, and equate the coeﬃcients of each individual power law of ρ to write:

Similar to the SHO case, we note that for

this of course is unacceptable, as it diverges at large ρ.

This means that the series must terminate, namely there is a maximum integer, jmax for which

. From Equation 81 this gives

We therefore conclude that the allowed energies are

This is the well-known Bohr’s formula.Using again equation 74, one ﬁnds

is known as the Bohr’s radius.The ground state (namely, the state of lowest energy) is obtained by putting n = 1 in Equation 85. Putting the values of the physical constants, one ﬁnds that

Returning to Equation 62, the wavefunctions are given by

For l = 1, the recursion formula terminates the series after a single term, v(ρ) is constant, and one ﬁnds

is an associated Laguerre polynomial, and

is known as the qth Laguerre polynomial. I list in table 5.1 the ﬁrst few radial eigenfunctions of the hydrogen. 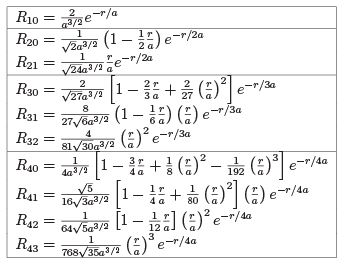 Table 2: The ﬁrst few radial wavefunctions for the hydrogen, REl (r).According to the standard interpretation of the wavefunction, the quantity

represents the probability of ﬁnding the electron in the volume element

, when the system is in the stationary state speciﬁed by the quantum numbers (n, l, m).

We can write the radial part as

Finally, in ﬁgures 3 – 5 I give a few examples of the full probability density of ﬁnding the electron in (r, θ) for a hydrogen atom, namely

for few values of the quantum numbers n, l, and m. As is obvious from the discussion above, this probability is independent on φ, but only on r and θ.

As a ﬁnal remark, I would add that in the usual spectroscopic notation the quantum number l is replaced by a letter, according to the following table: Thus, the energy levels