The document Overtime: Effects, Treatment and Control B Com Notes | EduRev is a part of the B Com Course Cost Accounting.
All you need of B Com at this link: B Com

Usually the workers are supposed to work for a given time per day or per week. It is called the normal work period whereas overtime is the work done beyond the normal work period.In India, the Factories Act provides for payment of overtime wages at double the usual rate of wages. If a worker works for more than 9 hours on any day or for more than 48 hours in a week, he is treated to be engaged on overtime and is given wages at double the basic hourly rate for the overtime put in by him.The calculation of wages due to a worker is made either at single rate up to 9 hours in a day and at double rates for the time over 9 hours or at single rate upto 48 hours in a week and over 48 hours at double rate whichever is more beneficial to the worker. Double rate for overtime is paid to give incentive for late hours. The additional amount paid on account of overtime is known as overtime premium.

As a rule overtime work should not be resorted because of increase in the cost of production which is due to the following reasons:(i) Overtime is paid at a higher rate.(ii) Overtime comes at late hours when fatigue has set in and worker’s efficiency will not be as much as it was during normal time.(iii) Workers will adopt the habit of postponing the work to be done in overtime just to earn more wages.(iv) Expenses like lighting, cost of supervision, wear and tear of machinery etc. will increase disproportionately.Effect of Overtime on Productivity:Overtime work affects the productivity of workers. As we know overtime premium is an extra payment over normal wages and hence will increase the cost. The efficiency of workers during overtime work may fall and hence output may be reduced.To earn more, workers may not concentrate on work during normal hours and thus the output during normal hours may fall. Reduced output and overtime premium will increase the cost of production.Therefore, overtime work should be avoided because jobs have done in overtime cost more as compared to the jobs done during normal hours. However, overtime cannot be totally eliminated because there are some cases when there is no other alternative but to do overtime work.For example, overtime may be needed for the execution of rush (or urgent) orders or overtime may be required because of breakdown of machinery or failure of power during normal hours and it is desired to complete the normal work in overtime. Similarly, in completing some operations, continuity of work is required in the absence of which work will be spoiled and thus overtime is required.Occasional overtime is, however, a healthy sign because it shows that factory has employed the reasonable number of workers and they are not idle. If it comes to the notice that overtime is needed regularly, serious thought must be given to the permanent increase in labour force either by an increase in the number of shifts worked or by installing additional machinery.The works manager or some other high officer should authorise overtime and list of the workers required off and on for late work to cope up with the production schedule should be prepared by the foreman and submitted to the works manager for approval. Overtime cost should be recorded separately so that investigation may be made into the department incurring it to know the genuineness of overtime.Treatment of Overtime Premium:The normal wages paid form part of direct labour cost or indirect labour cost depending upon whether labour is direct or indirect while there is controversy as regards treatment of overtime premium. It is sometimes said that it is not reasonable to charge a particular job with overtime premium merely because it was done in overtime. To do away with this inequity, normal wages are grossed up to allow for overtime premium and, therefore, each job, whether done in normal time or overtime is charged at the same rate of wages.This method of treatment of overtime premium is suitable when the sequence of jobs is a matter almost of chance, but if overtime is needed in case of a rush job (or urgent job) at customer’s request so as to complete it within a particular time, it is proper to charge the overtime premium to the cost of the rush job.Where, however, overtime arises due to any abnormal reason such as breakdown of machinery or failure of power, overtime premium is excluded from the cost of production and is debited to the Costing Profit and Loss Account.Control Over Overtime Work:Keeping in view the disadvantages of overtime work, it is necessary that proper control should be exercised in order to keep it to the minimum possible level.Following steps may be taken in this regard:1. A proper control should be exercised during normal hours to ensure that overtime is not allowed when normal output is not achieved during normal working hours.2. A statement of overtime work should be prepared along with justification for putting up before the competent authority. If the competent authority feels justified, sanction for overtime work should be accorded. In no case, overtime work should be allowed before prior sanction.3. Actual rate of output per hour achieved during the overtime period should be compared with normal rate of output per hour during the normal period to ensure that rate of output has not decreased during the overtime period.4. If possible, an upper limit of overtime should be fixed for each category of workers.5. Periodical reports on overtime work along with wages given for such work should be sent to the .top management for taking corrective action, if needed,Illustration :Calculate the normal and overtime wages payable to a workman from the following data: 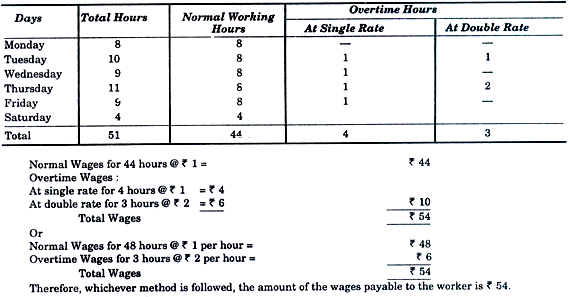