Reaction of metals with oxygen

Magnesium burns in the air easily to produce magnesium oxide. But not all metals combine with oxygen easily. Some metals require heating in combination with oxygen. 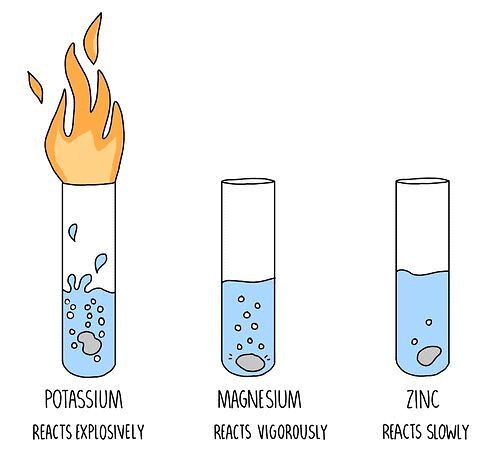 Reactivity of different metals with oxygen(i) Sodium and potassium metals react so vigorously with oxygen that they catch fire when kept in the open. They are kept immersed in kerosene oil.

(ii) Surface of metals like Mg, Al, Zn and Pb is covered with oxide layer, when kept at ordinary temperature.

(iii) Iron does not burn on heating but iron filings bum vigorously when sprinkled on the flame.

(iv) Copper does not bum but forms a black layer of copper (II) oxide.

(v) Silver and gold do not react with oxygen even at high temperature.Anodising

(1) Metals like Na, K and Ca react with cold water instantly. Na and K metals react so violently that hydrogen produced in the reaction catches fire.

(ii) Reaction with Ca is less violent. Heat evolved is not sufficient for hydrogen to catch fire.

Calcium floats on water because bubbles of hydrogen formed sticks to the metal (hydrogen is lighter than air).

(iii) Magnesium does not react with cold water. It reacts with hot water to form magnesium hydroxide and hydrogen. It also starts floating like calcium.

(iv) Metals like Al, Fe and Zn do not react either with cold or hot water. They react with steam to form metal oxide and hydrogen.Activity-6

Aim: Perform an activity to show that Al, Fe, and Zn react with steam to form a metaloxide and hydrogen.Materials required:

(1) Set up the apparatus as shown in the figure.

(2) Place the sample of Al metal and glass-wool soaked in water as shown in the figure.

(3) Fill the trough with water and invert a test tube filled with water over the other end of the delivery tube.

(4) Place a burner below the glass-wool soaked in water. 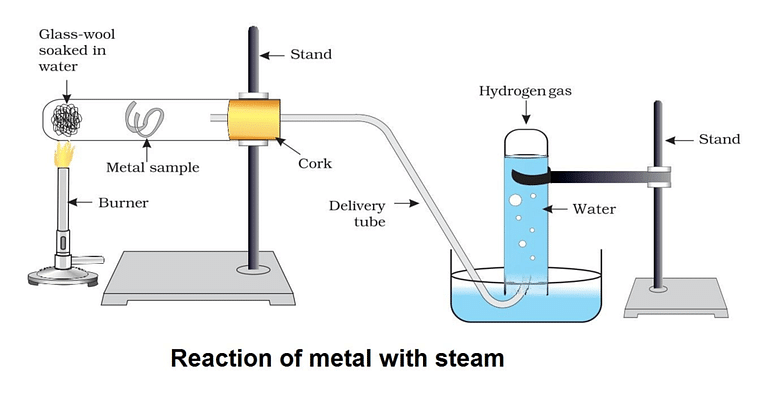 Action of steam on a metal

The reaction of metals with acids:

Different metals react with acid with different rate of reaction. Some metals do not react at all.Activity 7.

Aim: Perform an activity to study the rates of reactions of metals with acids.

Procedure: (1) Take dilute hydrochloric acid in different test tubes.(2) Add a small amount of different metals in the test tubes separately.It is observed that different metals react with different speeds. It is found that rate of reaction is fastest with Mg. It decreases in the order : Mg > Al > Zn > Fe.There is no reaction at all with copper.The reactions with metals can be written as:Mg + 2HCl-----> MgCl2 + H2 2Al + 6HCl-----> 2AlCl3 + 3H2Zn + 2HCl-----> ZnCl2 + H2 Fe + 2HCl----->FeCl2 + H2 (3) Copper does not react at all with dilute hydrochloric acid.(4) N ow take dilute H N 0 3 in different test tubes. Add the above metals separately in different test tubes. It is observed that hydrogen gas is not evolved with any metal. This is because hydrogen gas gets oxidised to water by nitric acid and some oxide of nitrogen is produced.(5) Take very dilute nitric acid in two test tubes. In one test-tube add a small piece of magnesium and in the other, a small piece of manganese. We observe that hydrogen gas is evolved in the two test tubes.

It is the only reagent that is capable of dissolving metals like gold and platinum. It is obtained by mixing concentrated hydrochloric acid and concentrated nitric acid in the ratio of 3 : 1. Aqua regia is a Latin word meaning 'royal water’. Aqua regia is highly corrosive and fuming.