20. Cellular DNA is the information source for making proteins in the cell. A section of DNA that provides information for one protein is called the gene. These genes control characteristics or traits. 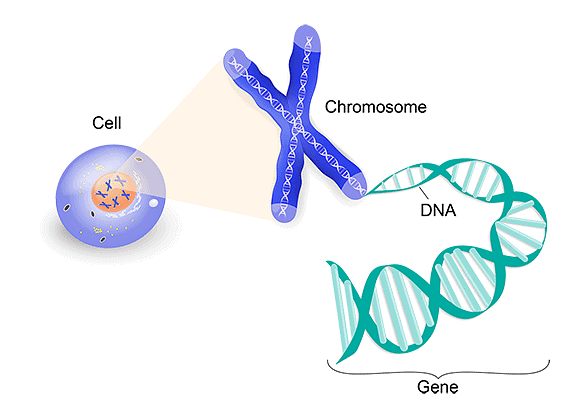 This shows that male gametes determine the sex o f the child and there is 1 : 1 possibility of the couple having a girl or a boy child.29. The gradual unfolding of organisms from pre-existing organism through change since the origin of life is termed as evolution.30. Due to changes in DNA, variation in a population arises which may provide protection from adverse conditions to certain members.31. Let us understand how variation leads to evolution. Consider a group of twelve red beetles which live in bushes with green leaves. Let us imagine that crows eat these beetles. The more beetles the crows eat, fewer beetles are available to reproduce. Now, let us think of three different situations that can develop in this beetle population.32. A variation occurs such that beetles now produced are green, which are easily masked amongst leaves. Thus crows feed on only red beetles, resulting in increase in population of green beetles. Here nature selects fitter organism. This is natural selection.33. There is yet another variation resulting in bine beetles. Now both red, as well as blue beetles, are not naturally selected. But an elephant passing by happens to stamp in such a manner that most beetles are killed, but few surviving ones are blue.34. Thus, even though in first case there was survival advantage and hence natural selection, the second case it leads to genetic drift without any adaptation due to an accident.35. Situation three : When the beetle population begins to expand, the bushes start suffering from plant disease. The amount of leaf material available as food for the beetles is reduced. It results in reduction in weight of beetles. However, when the plant disease is eliminated the beetle size again increases. This is due to the that the fact weight of the beetle was reduced due to starvation which will not change the DNA of the germ-cell.

36. The changes that occur in germ cells are passed on to the progeny. Any trait that is acquired during the life time of an individual, cannot be inherited.37. Charles Darwin came up with the idea of evolution of species by natural selection. His theory tells us how life evolved from simple to more complex forms.38. Urey and Miller, experimentally proved that life must have arisen from simple inorganic molecules.39. Speciation is formation of new species from a previously existing one due to genetic drift and geographical isolation.40. The branch of biology dealing with how such a wide variety of organisms come to exist is termed evolution. Various evidences which support evolution are :(i) Homologous organs(ii) Fossils(iii) Comparative embryology.41. Complex organs or organisms arise by step by step small variations. Hence, even very dissimilar looking structures would have evolved from a common ancestral design.42. Evolution gives rise to more complex body designs even while the simpler body designs continue to flourish.43. Study of evolution of human beings indicates that all of us belong to single species Homo sapiens that can be traced back to Africa.