Carbon exists in a large number of allotropic forms. These include diamond, α-and β-graphite, a rare hexagonal form of diamond and a variety of discrete molecules such as C60 which are rarely clusters of carbon atoms and are called collectively fullerenes.

Diamond is extremely unreactive and in contrast graphite graphite is quite reactive. Diamond is typically colorless, through industrial diamonds are often black. Most naturally occurring diamond contain a trace of nitrogen, but blue diamonds contain a trace of Al instead. In diamond each C atom is tetrahedrally surrounded by the four other C atoms, each at a distance of 1.54 Å. The tetrahedral are linked together into a three-dimensional giant molecule. The unit cell is cubic. Strong covalent bonds extent in all directions. Thus the melting point is abnormally high (about 3930°C) and the structure is very hard (Figure). (In a rare modification of diamond, the tetrahedral are arranged differently to give a wurtizite like structure and a hexagonal unit cell). 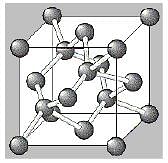 Graphite is composed of flat two-dimensional sheet of carbon atoms. Each sheat is a hexagonal net of C atoms and may be regarded as a fused system of benzene rings. The layers are held together by relatively weak van der Waals forces.

In graphite only three of the valency electrons of each carbon atom are involved in forming σ bonds (using sp2 hybrid orbitals). The fourth electron forms a π bond. The π electrons are delocalized over the whole sheet and as they are mobile, graphite conducts electricity. Conduction can occur in a sheet, but not from one sheet to another.

Diamond occur naturally in igneous rocks, formed by crystallization of molten from deep within the earth. This igneous rock may contain 0.1 g of diamond per tonne. Diamond has a density of 3.5g/cc and is the hardest naturally occurring substance-a property which explains its use in oilwell drills, as an abrasive for sharpening very hard tools and in dies for the manufacture of tungsten filaments for electric light bulbs. Both these properties of diamond are readily understood in terms of its structure-a three dimensional array of carbon atoms, each atom being surrounded tetrahedral by four other carbon. Each diamond crystal is a giant molecule containing very strong bonds. 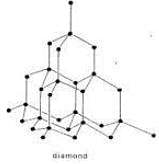 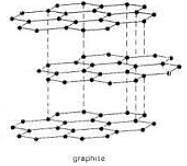 1. Carbon dioxide is the acid a nhydride of carbonic a cid, a nd a solution of it in water will slowly turn blue litmu s red. As equilibrium is set up a nd when the solution is boiled all the CO2 is evolved.

2. Carbon dioxide readily reacts with alkalies forming the carbonate and if CO 2 is in excess, then hydrogen carbonate.

The above reaction accounts for the formation of temporarily hard water.

1. Carbon monoxide is a powerful reducing agent being employed indu strially in the extraction of iron and nickel.

2. It reacts with many transition metals, forming volatile carbonayls; the formation of nickel carbonyl followed by its decomposition is the basis of the Mond’s process for obtaining very pure nickel.

This is an evil-smelling gas and can be made by dehydrating propanedioic acid (Malonic acid) of which it is the anhydride with phosphorus pentoxide.

The binary compounds of Carbon with other elements are called carbides. They are classified into following 3 category

(i) Ionic Carbides (or salt like car bides): Generally formed by elements of I, II and III grou p (B exception)

These give CH4 on reaction with H2O

These give C2H2 on reacting with H2O

These give 1-propyne on reaction with H2O

Such carbides are formed by the transition metals in which carbon atoms occupy interstitials in the crystal structure of metals.

Silicon is the second most abundant element occurring in the earth’s crust (about 28 per cent by weight).

Silicon is a very high melting-point solid with the same structure as diamond. The non-existence of an allotrope with the graphite structure clearly shows the inability of silicon atoms to form multiple bonds with themselves.

2. it is nor atta ck ed by a cis except hydrofluoric acid with which it forms hexa flourosilic acid.

Carbon differs from the other elements in its unique ability to form pπ-pπ multiple bonds, such a s C=C, C ≡C , C=O, C=S and C ≡N . The later elements do not form pπ-pπ bonds, principally because the atomic orbitals are too large and diffuse to obtain effective overlap, but they can use d orbitals in multiple bonding, particularly between Si and N or O. Thu s (N(SiH3)3 is planar and has pπ-dπ back bonding but N(CH3)3 is pyramidal and has no π bonding.

Non metallic element in Period 3 and below can use available d orbitals to expand their valence shells by delocalization of the O or N lone pair, so the silyl ether and silyl amine are the weaker Lewis bases in each pair.

2. Not attacked by acids. However, it gives the following tow reactions at high temperature.

Binary compounds of silicon with oxygen are called silicates but they contain other metals also in their structures.

(i) Since the electronegativity difference between O and Si is about 1.7 so Si —O bond can be considered 50% ionic and 50% covalent.

Silicate structure are based upon SiO44– tetra hedral units.

(iii) SiO44– tetrahedral units may exists as discrete units or may polymerise into larger units by sharing corners.

(A) Orthosilicate:  These contain discrete [SiO4]4– units i.e., there is no sharing of corners with one another as shown in figure.

(B) Pyrosilicate: In these silicates two tetra hedral units are joined by sharing oxygen at one corner thereby giving [Si2O7]6– units, (–) charges will be present on the oxygen atoms which is bonded with one Si atom.

(C) Cyclic silicates: If two oxygen atoms per tetrahedron are shared to form closed rings such that the structure with general formula

is obtained the silicates containing these anions are called cyclic silicates

anions are the typical examples of cyclic silicates.

(F) 2D Sheet Silicate: when SiO4 units share three corners the structure formed is an in finite twodimensional sheet of empirical formula (Si2O5 )2n-n . There are strong bonds within the Si—O sheet, but much weaker forces hold each sheet to the next one. Thus these minerals tend to cleave into thin sheets.

It is organo silicon polymer

Silicones may have the cyclic structure also having 3, 4, 5 and 6 nos. of silicon atoms within the ring.

Alcohol analogue of silicon is known as silanol

It provides the cross linking among the chain making the polymer more hard and hence controlling the proportion of RSiCl3 we can control the hardness of polymer.

1. It can be used as electrical insulator (due to inertness of Si —O—Si bonds)

3. It is used as antifoaming agent in sewage disposal, beer making and in cooking oil used to prepare potato chips.

4. As a lubricant in the gear boxes.

Silica or silicon dioxide occurs in nature in free state as sand, quartz and flint and in the combined state as silicates like, Feldspar: K2O.Al2O3.6SiO2, Kaolinite: Al2O3.2SiO2.2H2O etc.

(i) Pure silica is colourless, but sand is usually coloured yellow or brown due to the pressure of ferric oxide as an impurity.

(ii) Silicon dioxide is insoluble in water and all acids except hydrofluoric acid.

(iv) When silica is heated strongly with metallic salts, silicates are formed and the volatile oxides are driven off as vapours. 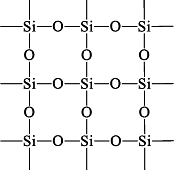 (i) Sand is used in large quantities to make mortar and cement.

(ii) Being transparent to ultra violet light, large crystal of quartz are used for making lenses for optical instruments and for controlling the frequency of radio-transmitters.

(iv) Silica gel (SiO2.Xh2o) is used a s a desiccant (for a bsorbing moisture) and as an adsorbent in chromatography.

The carbon halides are not hydrolyzed under normal conditions because they have no vacant darbitals and cannot form a five coordinate hydrolysis intermediate. In contrast the silicon halides hydrolyse readily. Silicon has 3d orbitals available and these may be used to coordinate OH ions or water as a first step in hydrolysis. In any atom there are always empty orbitals, but these are usually too high in energy to be used. If sufficient energy is provided by using superheated st5eam then CCl4 will hydrolyse

The silicon halides are rapidly hydrolyzed by water to give silicic acid.

GeCl4 and GeBr4 are hydrolyzed less readily, SnCl4 and PbCl4 hydrolyse in dilute solutions, but hydrolysis is often incomplete and can be repressed by the addition of the appropriate halogen acid.

SnO is an amphoteric white solid oxide. It dissolved in acids to form stannous salts

It is a colourless solid soluble in water. Its solution becomes milky on standing due to its hydrolysis to Sn(OH)2 and HCl. It aqueous solution is acidic to litmus. It is a strong reducing a gent. It soluble in alcohol and ether also.

The solution on crystallization gives colourless crystals of SnCl2.2H2O

1. When SnCl2 solution is a dded to aqueous solution of mercuric chloride, a silk y white precipitate of mercurous chloride, Hg2Cl2 is formed which turns black due to further reduction of Hg 2Cl2 to black mercury

3. It is hydrolyzed with water to produce white precipitate of Sn(OH)2

1. It dissolves in conc. H2SO4 to form stannic sulphate

(ii) It is not lea d peroxide.

(iii) It is strong oxidizing a gent.