The document Panchayati Raj and Samiti - Revision Notes, Indian Polity Notes | EduRev is a part of the UPSC Course Indian Polity for UPSC CSE.
All you need of UPSC at this link: UPSC

The successful working of democracy demands association of people at the various levels of administration. The panchayati raj has been introduced in India with the view of associating people with administration at the grass-root level and the people have been assigned an active role in the formulation and implementation of their plans.These institutions are in existence in almost all states and union territories, with variations in their structure. Apart from providing basic amenities to the rural population, these institutions are also involved in identification of beneficiaries of the anti-poverty programmes such as IRDP and other rural development programmes.

The executive committee elected by the Gram Sabha is the Panchayat. The appellation differs from state to state: panchayat, gram panchayat, gaon panchayat. The panchayat is created for a poulation of around 2000 people. 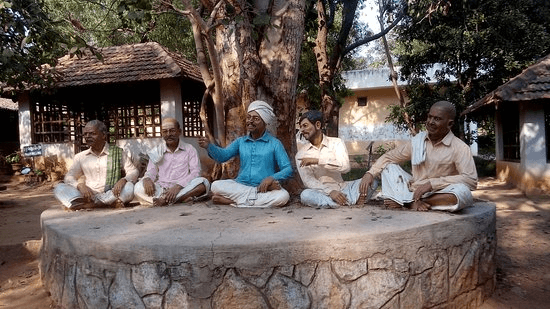 Village panchayatThe membership of the panchayat also varies from state to state; from five to thirty-one. The members of the Panchayat are elected by the Gram Sabha by secret ballot. In some states like Assam, Jammu-Kashmir and Uttar Pradesh, the election is by show of hands. The members are called ‘Panchas’.The whole village is divided into wards and each ward elects one Panch. In Bihar, the members are partly elected and partly nominated.The presiding officer is called by a variety of names in different states such as—President– Assam, Kerala and Tamil Nadu.Sarpanch– Andhra Pradesh, Gujarat, JammuKashmir,Madhya Pradesh, Maharashtra, Orissa, Punjab and Rajasthan.Mukhiya– Bihar and Orissa.Adhyaksha– West Bengal.Pradhan– Uttar Pradesh.The President's election procedure also varies from state to state. In some states he is directly elected, by Gram Sabha in some states and by panchas in some states.Two-thirds majority votes of members of the panchayat can remove the presiding officer from office. There are reservations for scheduled castes and scheduled tribes and also for women in the panchayat. In Bihar, reservations are considered by the ‘Mukhya’ who is the presiding officer.The tenure of panchayat, again, varies from state to state—Three years: Andhra Pradesh, Orissa and Rajasthan.Four years: Assam, Gujarat, Jammu-Kashmir, Maharashtra and West Bengal.Five years: Kerala, Madhya Pradesh, Tamil Nadu, Karnataka, Haryana, Punjab and Uttar Pradesh.In Bihar three classes of panchayats are seen and the term of office varies with the class of Panchayats. They are Prathama Varga gram panchayat with a 5-year term, Dvitiya Varga gram panchayat with four years of office and Tritiya Varga gram panchayat with a three-year term.The panchayat is the key instrument in the execution of community development programmes. The panchayat acts as an agent for state government in the performance of certain allotted tasks. The functions of the panchayat are (1) obligatory and (2) discretionary, which shall be performed and may be performed respectively.

The main sources of income of the panchayat are the taxes. The following compulsory taxes are imposed by the panchayat—

With the approval of the zila parishad, the panchayat can impose certain taxes. In Bihar, Gujarat and Maharashtra, the panchayats are entrusted with the collection of revenue. In some states the state governments grant a specific percentage of land revenue to the panchayats. The exceptions are West Bengal, Uttar Pradesh, Orissa, Tamil Nadu and Jammu-Kashmir .

The low level of finances is the common feature of all the panchayats in India. It affects efficient and effective functioning of the panchayat. With the result the panchayat is unable to perform even the obligatory functions.

Apart from the insufficient finances there are also other factors which are attributed to the inefficient functioning of the panchayats–the unsystematic way of meeting, non-issuance of agenda for the meeting, absence of quorum, delays, spending more time on administrative work and less concern over the developmental programmes were responsible, as per the findings of the Rajasthan Evaluation Organization.  With the transfer of judicial work to nyaya panchayat, the member's interests flagged (weakened) considerably.

The panchayat samiti is the intermediate tier in the panchayati raj system of rural local government. It is known by various names in the states of India like:

The term of office also varies from three to five years.

The president of the panchayat samiti is also referred to by various names:

Zila Parishad is the apex body in the Panchayati raj system of rural local government in India. The Zila Parishad is the body at the district level. Due to the establishment of the two-tier set-up, the Zila parishad has been abolished in the States of Haryana, Madhya Pradesh, Karnataka and Orissa.This is a corporate body, having perpetual succession and a common seal, can sue and be sued, and is empowered to enter into contracts. The name of this body varies from State to State.

The membership of Zila Parishad is designed to link the Panchayat Samiti, State Legislature and Parliament. There are also representations for women, scheduled castes and scheduled tribes, and also for the co-operative societies.Persons possessing experience in administration, public life or rural development are also made members.The membership varies from forty to sixty. In some states like Maharashtra, Gujarat and Uttar Pradesh there is direct election for some of the members of the Zila Parishad. In Punjab, Panchayat Samiti members constitute an electoral college and elect some members of the Zila Parishad, although some are elected directly.As urban and rural local governments in different states are so differently constituted, there is no provision for representation from the urban local government in the Zila Parishads. The Zila Parishad includes towns and cities with urban forms of local government and is responsible for the development of the entire district.

The tenure of members is dependent on the original tenure as the members are mostly elected members of other organizations. The term of co-opted members varies from three to five years.

The President of the Zila Parishad is elected from among the members themselves. He is known by different names in different states.

Chairman— Andhra Pradesh, Tamil Nadu, Punjab and West BengalPresident— Assam, Gujarat, MaharashtraAdhyaksha— Bihar and Uttar PradeshPramukh— RajasthanThe President presides over the meetings and conducts the proceedings. He inspects the lower tiers of Panchayati raj institutions and submits inspection reports to the Zila Parishad. Along with the confidential report written by District Collector on the secretary to the Zila Parishad, opinion of the secretary's work by the President is appended.

The President of Maharashtra Zila Parishad exercises administrative powers also, as it is the executive body. The President can be removed from office by a vote of no-confidence, though he is elected for a full term.