The document Pancreatic Secretion - NEET NEET Notes | EduRev is a part of NEET category.
All you need of NEET at this link: NEET

There are two types of exocrine secretions produced by the pancreas.  Acinar cells produce digestive enzymes:  amylase, lipase, and peptidases.  Pancreatic peptidases are produced as inactive zymogens that are only activated after they reach the duodenum (see webpage on Zymogens). The other major secretion is bicarbonate (HCO3-), which is produced by the duct cells.  The bicarbonate acts to neutralize acidic chyme coming from the stomach.  As well, fluid that is produced by duct cells flushes enzymes and zymogens out into the large pancreatic duct.

At right is a picture from one of our histology slides.  The majority of exocrine tissue in the pancreas consists of acinar cells, which are the dark clusters visible throughout.  The pointer points to a small intercalated duct.  These ducts receive the acinar cell secretions, and secrete bicarbonate and fluid.  They connect to larger ducts that eventually lead to the large pancreatic duct that has its outlet at the duodenal papilla. 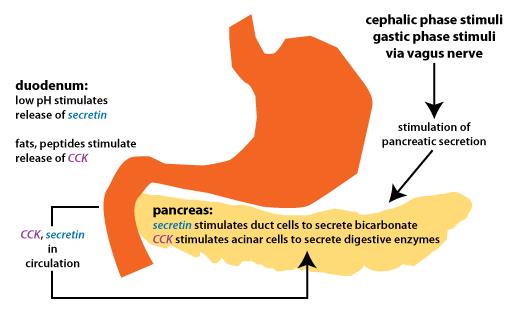