The document Parliamentary System Notes | EduRev is a part of the UPSC Course Indian Polity for UPSC CSE.
All you need of UPSC at this link: UPSC

≫ Political Homogeneity: members of the council of ministers usually belong to the same political party (unless its a coalition government)≫ Double membership: ministers are members of both the executive and the legislature.≫ Leadership of the Prime Minister, which gives him a crucial role in the govt.≫ Dissolution of the Lok-Sabha before the end of its term

≫ Secrecy: Ministers take an oath of secrecy before entering office, administered by the President

FEATURES OF PRESIDENTIAL GOVERNMENTThe American System has the following features:≫ President is both head of state and head of government. Ceremonial head as well as leaders of the executive.≫ Elected for a fixed tenure of four years. Cannot be removed except by impeachment by the Congress for a grave unconstitutional act.≫ Governs with the help of a smaller, Kitchen Cabinet.

≫ President and his secretaries are not responsible to the legislature.

≫ President cannot dissolve the lower House of the Congress.≫ Based on the principle of separation of powers. The legislative, executive and judicial powers of the govt are separated and vested in 3 independent organs of the govt.MERITS OF THE PARLIAMENTARY SYSTEM≫ Harmony between the Legislature and the Executive

≫ Responsible government: Parliament holds the executive accountable through devices like the question house, discussions, adjournment motions etc.≫ Prevents despotism as authority is vested in a group of individuals (the council of ministers) and not a single person. This, disposal of authority checks the dictatorial tendencies of the executive. Moreover, the executive is responsible to the parliament and can be removed by a No-Confidence motion.Ready alternative government are the head of the state can invite the opposition party to form the government in case the ruling party loses its majority. This means an alternative government can be formed without fresh elections. Hence, Dr Jennings said, "The leader of opposition is the alternative PM".≫ Wide representation through the executive, as ministers are representatives of the people as well.DEMERITS OF THE PARLIAMENTARY SYSTEM≫ Unstable government

≫ No continuity of policies

≫ Dictatorship of the Cabinet

≫ Against separation of powers

INDIAN AND BRITISH SYSTEMDifference with the British System:≫ India a republic. Britain a Constitutional Monarchy.≫ Parliament is supreme in Britain. India's Parliament is restricted by a written constitution, federal system, judicial review and fundamental rights.≫ British Prime Minister has to be a member of the Lower House. Indian Prime Minister can belong to any House of the Parliament.≫ Only members of Parliament can be appointed as ministers in Britain. In India, anyone can be appointed for maximum six months.≫ Britain's ministers have legal responsibility for official acts. Indian's ministers are not required to countersign the official acts of the head of the State.≫ Shadow Cabinet: Unique British institution 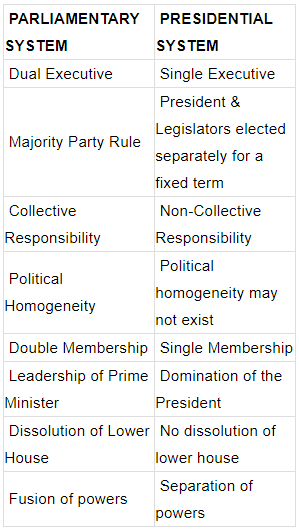 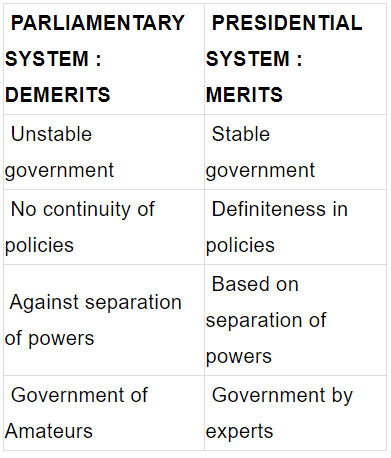 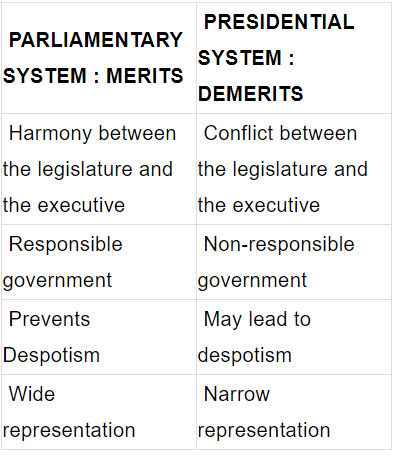