Question 3:A lightly loaded full Journal bearing has Journal diameter of 50 mm, bush bore of 50.05 mm and bush length of 20 mm. If rotational speed of Journal is 1200 rpm and average viscosity of liquid lubricant is 0.03 Pa s, the power loss (in W) will be 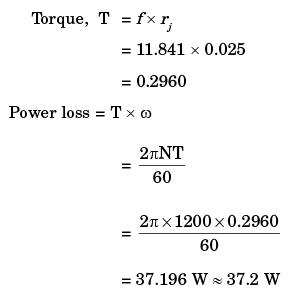 Question 5:A natural feed Journal bearing of diameter 50 mm and length 50 mm operating at 20 revolution/sec. carries a load of 2.0 kN. The lubricant used has a viscosity of 20 mPa.s. The radial clearance is 50 mm. The Sommerfield number for the bearings is Question 6:A ball bearing operating at a load F has 8000 hours of life. The life of the bearing, in hours, when the load is doubled to 2F is

Question 7:Which one of the following is criterion in the design of hydrodynamic Journal bearings?

Question 8:The basic load rating of a ball bearing is

Question 10:To restore stable operating condition in a hydrodynamic Journal bearing, when it encounters higher magnitude of loads Question 13:Starting friction is low in

It is due to thick fluid friction from the start.