Question 2:A clutch has outer and inner diameters 100 mm and 40 mm respectively. Assuming a uniform pressure of 2 MPa and coefficient of friction of liner material 0.4, the torque carrying capacity of the clutch is

Question 5:For the brake shown in the figure, which one of the following is TRUE? 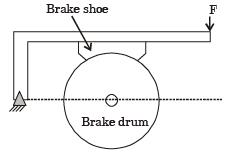 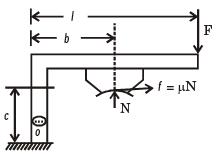 Taking moment about hinge in clockwise
Nb – Fl – μNc = 0
F = N(b - μc)/l
Self energizing if b > mc so for clockwise rotation of drum the brake is self energizing.

Question 6:A force of 400 N is applied to the brake drum of 0.5 m diameter in a band brake system as shown in figure, where the wrapping angle is 180°. If the coefficient of friction between the drum and the band is 0.25, the braking torque applied, in Nm is

Question 7:A band brake having bandwidth of 80 mm, drum diameter of 250 mm, coefficient of friction of 0.25 and angle of wrap of 270 degrees is required to exert a friction torque of 1000 N m.The maximum tension (in kN) developed in the band is

Question 8:A block-brake shown below has a face width of 300 mm and a mean coefficient of friction of 0.25. For an activating force of 400 N, the braking torque in Nm is Question 9:In a band brake the ratio of tight side band tension to the tension on the slack side is 3. If the angle of overlap of band on the drum is 180°, the coefficient of friction required between drum and the band is