Question 2:In full mould (cavity-less) casting process, the pattern is made of

The pattern is made of expanded polystyrene.

Question 3:The hot tearing in a metal casting is due to

Question 4:Match the casting defects (Group A) with the probable causes (Group B):

Question 5:During solidification of a pure molten metal, the grains in the casting near the mould wall area

Question 7:Two streams of liquid metal which are not hot enough to fuse properly result into a casting defect known -as

Question 8:While cooling, a cubical casting of side 40mm undergoes 3%, 4% and 5% volume shrinkage during the liquid state, phase transition and solid state, respectively. The volume of metal compensated from the riser is

The riser can compensate for volume shrinkage only in the liquid stage and transition stage and not in the solid state.
Hence volume of metal that needs to be compensated from the riser = 3 + 4 = 7%

Question 9:Which of the following engineering materials is the most suitable candidate for hot chamber die casting?

Question 10:An expendable pattern is used in

Question 11:Misrun is a casting defect which occurs due to

Question 12:The primary purpose of sprue in casting mould is to

Question 13:In centrifugal casting, the lighter impurities are

At the inner surface of the casting.

Question 14:Shrinkage allowance on pattern is provided to compensate for shrinkage when

Liquid shrinkage is compensated by riser.

Question 15:Disposable patterns are made of

Due to faster cooling rate of casting

Sand will go to last corners of casting Question 19:Which of the following casting processes uses expandable pattern and expandable mould?

Question 20:In sand casting fluidly of the molten metal increases with

Question 21:Hot chamber die casting is not suited for

Question 22:In hollow cylindrical parts made by centrifugal castings, the density of the part is

Question 23:Which one of the following is not a property of a sand mould?

Question 24:Electrical switches made out of thermoset materials are produced by

Question 25:Ceramics slurry is used in making the moulds for

Question 26:For casting of turbine blades made of high temperature and high strength alloys, the most suitable process is

Question 27:Green strength in powder metallurgy refers to the strength of

Question 28:For the same material, powder metallurgy process in superior to casting for

Hollow sections made by this

Question 30:Negative allowance is provided on the pattern to take care of

Question 31:50. In sand casting of hollow part of lead, a cylindrical core of diameter 120 mm and height 180 mm is placed inside the mould cavity. The densities of core material and lead are 1600 kg/m3 and 11300 kg/m3 respectively. The net force (in N) that tends to lift the core during pouring of molten metal will be

Question 32:The mould filling time is seconds is Question 34:Cold shut is a defect in casting due to 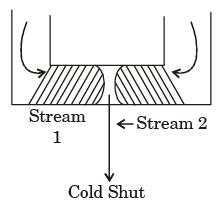 Question 35:The shape factor for a casting in the form of an annular cylinder of outside diameter 30 cm, inside diameter 20 cm and height 30 cm (correction factor k = 1.0) will be Question 36:Wood flour is added to core sand to improve

Wood flour get band out and provide easily removal of casting.

Question 37:A casting of size 100 mm × 100 mm × 50 mm is required. Assume volume shrinkage of casting as 2.6%. If the height of the riser is 80 mm and riser volume desired is 4 times the shrinkage in casting, what is the appropriate riser diameter in mm?

Question 38:Gating ratio of 1 : 2 : 4 is used to design the gating system for magnesium alloy casting.This gating ratio refers to the cross-section areas of the various gating elements as given below:
1. Down sprue
2. Runner
3. Ingates

Question 39:A 10 mm thick steel bar is to be horizontally cast with two correctly top risers of adequate feeding capacity. Assuming end effect without chill, what should be the theoretical length of the bar?

P. Influences the freezing range of the melt
Q. Compensates the loss of fluidity of the melt
R. Facilitates top feeding of the melt S. Avoids misrun

Question 41:The permeability of moulding sand was determined using a standard AFS sample by passing 2000 cc of air at a gauge pressure of 10 g/cm2. If the time taken for the air to escape was 1 min, the permeability number is Question 43:Chaplets are placed between mould in order to

Question 44:The primary function of a riser is to

Question 45:The optimum pouring time for a casting depends on several factors. One important factor among them is

Higher the fluidity, flow will be easier

Question 46:A cylindrical job with diameter of 200 mm and height of 100 mm is to be cast using modulus method of riser design. Assume that the bottom surface of cylindrical riser does not contribute as cooling surface. If the diameter of the riser is equal to its height, then the height of the riser (in mm) is

According to modulus method

Question 47:The part of a gating system which regulates the rate of pouring of molten metal is

Rate of pouring of molten metal depend son pouring basin.

Question 48:In a gating system, the ratio 1:2:4 represents 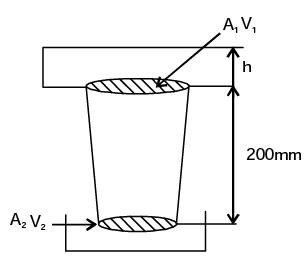 Question 50:In a sand casting operation, the total liquid head is maintained constant such that it is equal to the mould height. The time taken to fill the mould with a top gate is tA. If the same mould is filled with a bottom gate, then the time taken is tB. Ignore the time required to fill the runner and frictional effects, Assume Atmospheric pressure at the top molten metal surfaces. The relation between tA and tB is 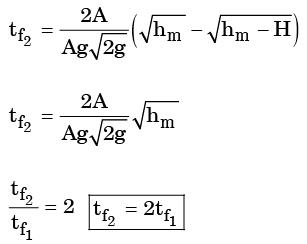 Question 52:Gray cast iron blocks 200 x 100 x 10 mm are to be cast in sand moulds, Shrinkage allowance for pattern making is 1%. The ratio of the volume of pattern to that of the casting will be

Question 54:Light impurities in the molten metal are prevented from reaching the mould cavity by providing

Question 55:Converging passage is used for feeding the liquid molten metal into the mould to

Pressure in runner is greater than atmospheric pressure so no aspiration takes place.

Question 56:The pressure at the in-gate will be maximum with the gating system

Question 57:Riser is designed so as to

If riser will solidify befo re casting if cannot compensate the liquid shrinkage and phase Transition shrinkage.