The document Past Year Questions: Fins And Unsteady Heat Transfer (Conduction And Convection) Notes | EduRev is a part of the Chemical Engineering Course Heat Transfer.
All you need of Chemical Engineering at this link: Chemical Engineering
Question 1:Two rods, one of length L and the other of length 2L are made of the same material and have the same diameter. The two ends of the longer rod are maintained at 100°C. One end of the shorter rod is maintained at 100°C while the other end is insulated. Both the rods are exposed to the same environment at 40°C. The temp at the insulated end of the shorter rod is measured to be 55°C. The temperature at the mid point of the longer rod would be.
Question 2:A fin has 5 mm diameter and 100 mm length. The thermal conductivity of fin material is 400 Wm–1K–1. One end of the fin is maintained at 130°C and its remaining surface is exposed to ambient air at 30°C. If the convective heat transfer coefficient is 40 Wm–2K–1, the heat loss (in W) from the fin is
Explanation

Question 3:Which one of the following configurations has the highest fin effectiveness?
Question 4:The heat transfer process between body and its ambient is governed by an Intemal Conductive Resistance (ICR) and an External Convective Resistance (ECR). The body can be considered to be a lumped heat capacity system is
Explanation

Lumped heat capacity can be applied when Bi < 0.1

Question 6:Lumped heat transfer analysis of a solid object suddenly exposed to a fluid medium at a different temp is valid when
Explanation

Question 7:The value of Biot number is very small (less than 0.01),when
Explanation

When conductive resistance of solid is negligible, then biot number is very small.

Question 8:A spherical thermocouple junction of diameter 0.706 mm is to be used for the measurement of temperature of a gas stream. The convective heat transfer coefficient on bead surface is 400 W/m2K, Thermophysical properties of thermocouple material are k = 20 W/mK, c = 400 J/kgK and r = 8500 kg/m3. If the thermocouple initially at 30°C is placed in a hot stream of 300°C, the time taken by the bead to reach 298°C, is
Explanation

Since Bi< 0.1, lumped system analysis can be used

Question 9:A small copper ball of 5 mm diameter at 500 K is dropped into an oil bath whose temperature is 300 K. The thermal conductivity of copper is 400 W/mK, its density 9000 kg/m3 and its specific heat 385 J/kgK. If the heat transfer coefficient is 250 W/m2K and lumped analysis is assumed to be valid, the rate of fall of the temperature of the ball at the beginning of cooling will be, in K/s,
Explanation 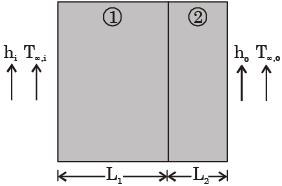 For the given condition, Biot number tends to zero, i.e. conduction resistance is far less than convection resistance. Therefore temperature between centre and surface is very small.

Question 13:A steel ball of diameter 60 mm is initially in thermal equilibrium at 1030°C in a furnace. It is suddenly removed from the furnace and cooled in ambient air at 30°C, with convective heat transfer coefficient h = 20 W/m2K. The thermophysical properties of steel are : density ρ = 7800 kg/m2, conductivity k =40 W/mK and specific heat c - 600 J/kgK. The time required in seconds to cool the steel ball in air from 1030°C to 430°C is
Explanation

Biot number provides a way to compare the conduction resistance within a solid body to the convection resistance external to the body (offered by the surrounding fluid) for heat transfer:

Where ‘s’ is a characteristic dimension of the solid
‘h’ is convective heat transfer coefficient
‘k’ is thermal conductivity of the body.

Question 15:A metal ball of diameter 60 mm is initially at 220°C. The ball is suddenly cooled by an air jet of 20°C. The heat transfer coefficient is 200 W/m2K. The specific heat, thermal conductivity and density of the metal ball are 400 J/kgK, 400 W/mK and 9000 kg/m3, respectively. The ball temperature (in °C) after 90 seconds will be approximately
Explanation 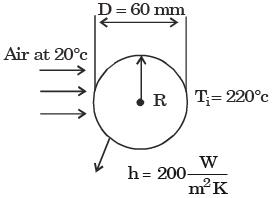