Three month moving average.
Forecast of the product for th e month of September is given by,

Question 2:The time series forecasting method that gives equal weightage to each of the most recent observation is 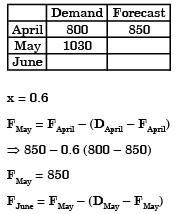 Question 4:Sales data of a product is given in the following table:

Regarding forecast for the month of June, which one of the following statements is TRUE?

Question 5:In exponential smoothening method, which one of the following is true?

means relatively less weightage for immediate forecast, or almost equal weightage for all previous forecast.
Hence high value of forecast is only chosen when nature of demand is not reliable rather unstable.

Question 6:In simple exponential smoothing forecasting, to give higher weightage to recent demand information, the smoothing constant must be close to

Conclusion:
It is showing the limit of responsiveness

Question 7:The demand and forecast for February are 12000 and 10275, respectively. Using single exponential smoothening method (smoothening coefficient = 0.25), forecast for the month of March is

Question 8:Which of the following forecasting methods takes a fraction of forecast error into account for the next period forecast?

Question 9:A moving average system is used for forecasting weekly demand. F1(t) and F2(t) are sequences of forecasts with parameters m1 and m2, respectively, where m1 and m2 (m1 > m2)  denote the numbers of weeks over which the moving averages are taken. The actual demand shows a step increase

Gi ven that , at certain the demand increased from d1 to d2 The weightage of the latest demand should be thereface f2(t) become M2 > M2.

Question 10:In an MRP system, component demand is

Question 12:For a product, the forecast and the actual sales for December 2002 were 25 and 20 respectively.
If the exponential smoothing constant (a) is taken as 0.2, the forecast sales for January 2003 would be 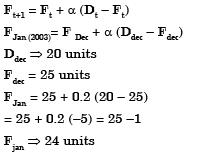 Question 13:The sale of cycles in a shop in four consecutive months are given as 70, 68, 82, 95.
Exponentially smoothing average method with a smoothing factor of 0.4 is used in forecasting.
The expected number of sales in the next month is

Question 14:A regression model is used to express a variable V as a function of another variable X, this implies that

Question 15:When using a simple moving average to forecast demand, one would

Question 16:In a time series forecasting model, the demand for five time periods was 10,13,15,18 and 22. A linear regression fit resulted in an equation F =  6.9 + 2.9 where F is the forecast for period f.
The sum of absolute deviations for the five data is

Question 17:The most commonly used criteria for measuring forecast error is

Question 19:Which of the following is a technique for forecasting?

Question 20:Which one of the following forecasting techniques is not suited for making forecasts for planning Production schedules in the short range?