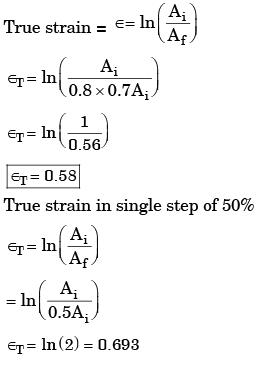 Question 2:A solid cylindrical stainless steel work piece of 200 mm diameter and 150 mm height. This component is reduced by 50% in height with flat die in open die forging. Assuming the flow stress of the material as 1000 MPa and the coefficient of friction to be 0.2 , the estimated forging force at the end of the stroke is

Question 3:Assertion (A): Cold working of metals results in increase of strength and hardness.
Reason (R): Cold working reduce the total number of dislocations per unit volume of the material

Question 4:Cold working produces the following effects
1. Stresses are set up in the material
2. Grain structure get distorted
3. Strength and hardness of the metal are increased
4. Surface finish is reduced

Stress are build up due to strain hardening & Grain structure distortion.

Question 5:An annealed copper wire of 25 mm diameter is drawn into a wire of 5 mm diameter. The average yield stress in this operation if the curve of the material is given, σ = 315 ε0.54 MPa

Question 6:Which one of the following manufacturing processes requires the provision of 'gutters'?

Gutters are used to settle down excess material.

Question 7:In a linearly hardening plastic material, the true stress beyond initial yielding

Question 8:It is desired to make a product having T-shaped cross-section from a rectangular aluminium block. Which one of the following processes is expected to provide the highest strength of the product?

Metal forming of Aluminimum is easy because there is negligible strain hardening in Aluminium.

Question 9:Engineering strain of a mild steel sample is recorded as 0.100%. The true strain is 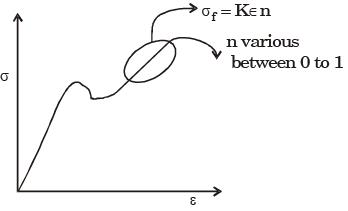 Question 11:The operation in which oil is permeated into the pores of a powder metallurgy product is known as

Question 13:In open-die forging, a disc of diameter 200 mm and height 60 mm is compressed without any barreling effect. The final diameter of the disc is 400 mm. The true strain is 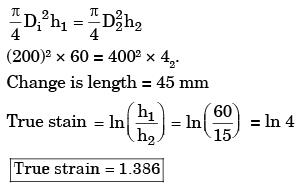 Question 14:A 2 mm thick metal sheet is to be bent at an angle of one radian with a bend radius of 100 mm. If the stretch factor is 0.5, the bend allowance is

Because with Deformation, material becomes stronger

Question 16:A test specimen is stressed slightly beyond the yield point and then unloaded. Its yield strength

Question 17:The true sliding strain for a low carbon Steel bar which is doubled in length by forging is

Question 18:In a rolling process, the state of stress of the material undergoing deformation is 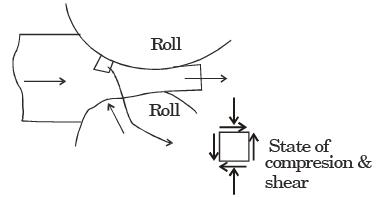 Question 19:In a single pass rolling process using 410 mm diameter steel rollers, a strip of width 140 mm and thickness 8 mm undergoes 10% reduction of thickness. The angle of bite in radians is

Question 20:The thickness of a plate is reduced from 30 mm to 10 mm by successive cold rolling passes using identical rolls of diameter 600 mm. Assume that there is no change in width. If the coefficient of friction between the rolls and the workpiece is 0.1, the minimum number of passes required is 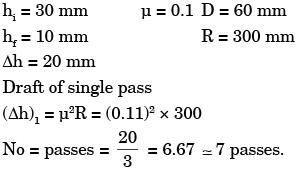 Question 21:In a rolling process, the roll separating force can be decreased by

As roll diameter decreases for the same reduction the contact length decreases. So less force will be required.

Question 22:Anisotropy in rolled components is caused by

When a material having different value of property in different Direction, called as anisotropic material.

Question 23:In a rolling process, thickness of a strip is reduced from 4 mm to 3 mm using 300 mm diameter rolls rotating at 100 rpm. The velocity of the strip (in m/sec) at the neutral point is

Question 24:The maximum possible percentage reduction in area per pass during wire drawing of an ideal plastic material without friction is of the order of 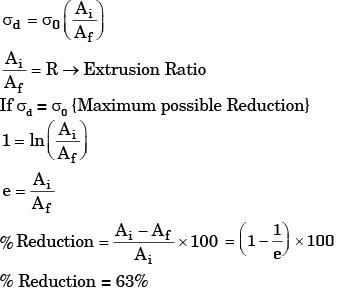 Question 25:A copper strip of 200 mm width and 300 mm thickness is to be rolled to a thickness of 295 mm. The roll of radius 300 mm rotates at 100 rpm. The average shear strength of the work material is 180 MPa. The roll strip contact length and the roll force are

Question 27:Thread rolling is restricted to

Intricate Deformation can take place only in Ductile material.

Question 28:The blank diameter used in thread rolling will be

Question 29:The cold forming process in which a hardened tool is pressed against a workpiece (when there is relative motion between the tool and the workpiece) to produce a roughened surface with a regular pattern is

Knurling: It is a process of impressing a diamond shaped or straight line pattern on the surface by a workpiece by using specially shaped hardened metal wheels to improve its appearance and to provide a better gripping surface.

Question 30:With respect to metal working, match Group A with Group B:
Group A
P.   Defect in extrusion
Q. Defect in rolling
R. Product of skew rolling
S. Product of rolling through cluster mill

Question 31:In a rolling process, the state of stress of the material undergoing deformation is

The material (metals) is subjected to high compressive stress as a resort of friction between the roll and the metal suface.

Question 32:In a single pass rolling process using 410 mm diameter steel rollers, a strip of width 140 mm and thickness 8 mm undergoes 10% reduction of thickness. The angle of bite in radians is 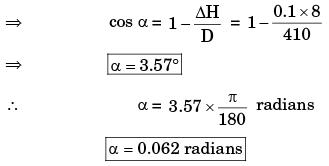 Question 33:A solid cylinder of diameter 100 mm and height 50 mm is forged between two frictionless flat dies to a height of 25 mm. The percentage change in diameter is

Question 34:The maximum possible draft in cold rolling of sheet increases with the

Question 35:The thickness of a metallic sheet is reduced from an initial value of 16 mm to a final value of 10 mm in one single pass rolling with a pair of cylindrical rollers each of diameter of 400 mm. The bite angle in degree will be

Question 36:A 4 mm thick sheet is rolled with 300 mm diameter rolls to reduce thickness without any change in its width. The friction coefficient at the work-roll interface is 0.1. The minimum possible thickness of the sheet that can be produced in a- single pass is 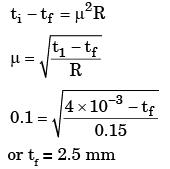 Question 37:In a rolling process, sheet of 25 mm thickness is rolled to 20 mm thickness. Roll is of diameter 600 mm and it rotates at 100 rpm. The roll strip contact length will be

Angle subtended by the deformed zone at the roll center,

Question 38:Hot rolling of mild steel is carried out

Question 39:A strip with cross-sectional area 150 mm × 4.5 mm is being rolled with 20% reduction of area using 450 mm diameter rollers. The angle subtended by the deformation zone at the roll centre is (in radians)

Question 40:A wire of 0.1 mm dia is drawn from a rod of 15 mm diameter dies giving reductions of 20%, 40% and 80% are available. For minimum error in the final size, the number of stages and reduction at each stage respectively would be 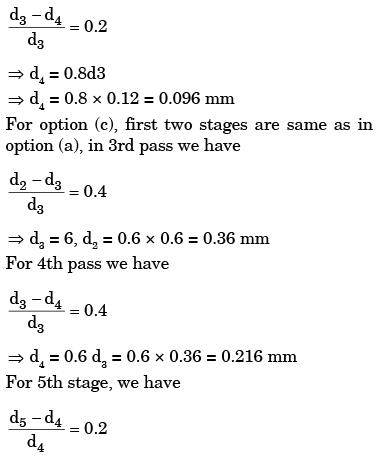 Question 41:The extrusion processes used for the production of toothpaste tubes is/are

Question 42:A moving mandrel is used in

Question 43:Semi brittle materials can be extruded by

Question 44:Collapsible tubes are made by

Collapsible tubes are made by extrusion process.

Question 45:The maximum reduction in cross-sectional area per pass (R) of a cold wire drawing process is R = 1 – e–(n + 1)
where n represents the strain hardening coefficient. For the case of a perfectly plastic material, R is 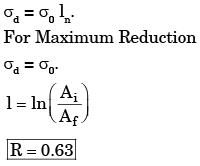 Question 47:In a wire drawing operation, diameter of a Steel wire is reduced from 10 mm to 8 mm. The mean flow stress of the material is 400 MPa. The ideal force required for drawing (ignoring friction and redundant work) is 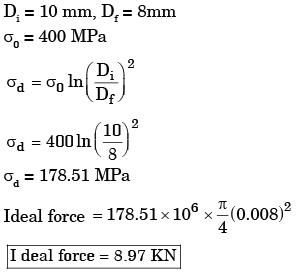 Question 48:A brass billet is to be extruded from its initial diameter of 100 mm to a final diameter of 50 mm. The working temperature of 700°C and the extrusion constant is 250 MPa. The force required for extrusion is

Question 49:The process of hot extrusion is used to produce

Aluminimum is ductile at higher temperature.

Question 50:For wire drawing operation, the work material should essentially be

For wire drawing, work material should be ductile in nature.