The document Past Year Questions: Internal Combustion Engine Notes | EduRev is a part of the Mechanical Engineering Course Thermodynamics.
All you need of Mechanical Engineering at this link: Mechanical Engineering
Question 1: In air standard Ottocycle the terminal pressures at the end of compression, heat release and expansion are respectively P2, P3 and P4. If the corresponding values are P2, P3, and P4, taking into account the effect of variable specific heat and dissociation of the working fluid, then

Question 4:An IC engine has a bore and stroke of 2 units each. The area to calculate heat loss can be taken as

Question 5:An air breathing air craft is flying at an altitude where the air density is half the value at ground level. With reference to the ground level, the air- fuel ratio at this altitude will be
Explanation

as mf is same at both places.

where 'V' is the volume of air taken in.

Question 6:In a spark ignition engine working on the ideal Otto cycle, the compression ratio is 5.5. The work output per cycle (i.e., area of the P – V diagram) is equal to 23.625 × 105 × VcJ, where VC is the clearance volume in m3. The indicated mean effective pressure is

Question 7:An ideal air standard Otto cycle has a compression ratio of 8.5. If the ratio of the specific heats of air (g) is 1.4, what is the thermal efficiency (in percentage) of the Otto cycle?

Question 8:For an engine operating on air standard Otto cycle, the clearance volume is 10% of the swept volume. The specific heat ratio of air is 1.4.The air standard cycle efficiency is

Question 9:An engine working on air standard Otto cycle has a cylinder diameter of 10 cm and stroke length of 15 cm. The ratio of specific heats for air is 1.4. If the clearance volume is 196.3 cc and the heat supplied per kg of air per cycle is 1800 kJ/kg, the work output per cycle per kg of air is

Question 10:The stroke and bore of a four stroke spark ignition engine are 250 mm and 200 mm respectively. The clearance volume is 0.001 m3.If the specific heat ratio g = 1.4, the air-standard cycle efficiency of the engine is

Question 11:Which one of the following is NOT a necessary assumption for the air-standard Otto cycle?

Question 12:In an air-standard Otto cycle, the compression ratio is 10. The condition at the beginning of the compression process is 100 kPa and 27°C.Heat added at constant volume is 1500 kJ/kg, while 700 kJ/kg of heat is rejected during the other constant volume process in the cycle.Specific gas constant for air = 0.287 kJ/kgK.The mean effective pressure (in kPa) of the cycle is 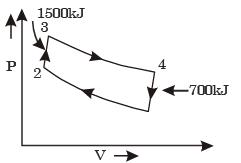 Question 14:For the same values of peak pressure, peak temperature and heat rejection, the correct order of efficiencies for Otto, Duel and Diesel cycles is

For same values of peak pressure and temperature. Diesel cycle is most efficient and Otto cycle is least. Efficiency of dual cycle lies in between.nDiesel > nDual > nOtto.

Question 15:The power output from a spark ignition engine is varied by

Question 16:For determining the ignition quality of compression ignition engine fuels, the reference fuels used are

Question 17:If air fuel ratio of the mixture in petrol engine is more than 15:1

Question 18:Alcohols are unsuitable at diesel engine fuels because

Question 19:Knocking tendency in a Sl engine reduces with increasing

Question 20:In order to burn 1 kilogram of CH4 completely, the minimum number of kilograms of oxygen needed is (take atomic weights of H, C and O as 1, 12 and 16 respectively)

Question 21:The silencer of an internal combustion engine

Question 22:A diesel engine is usually more efficient than a spark ignition engine because

Question 23:At the time of starting, idling and low speed operation, the carburettor supplies a mixture which can be termed as

Question 24:BHP of a diesel engine can be increased by

Question 25:Brake thermal efficiency of the three basic types of reciprocating engines commonly used in road vehicles are given in the increasing order as