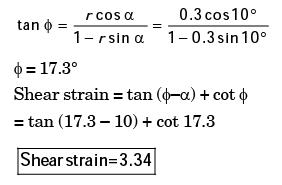 Question 2:A job of the shape shown in the figure below is to be machined on a lathe. The tool best suited for machining of this job must have

Should be cut by negative SCEA.

Question 3:Orthogonal machining of a steel workpiece is done with a HSS tool of zero rake angle. The ratio of the cutting force and the thrust force on the tool is 1 : 0.372. The length of cut chip is 4.71 mm while the uncut chip length is 10 mm.What is the shear plane angle ϕ and friction angle β in degree? Use Merchants theory 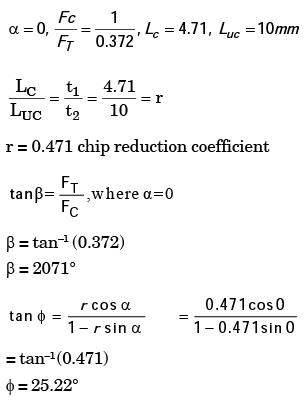 Question 4:A single point cutting tool with a nose radius of 0.4 mm was used to turn a component in a lathe employing feed rate of 0.3 mm/rev. If the feed rate is doubled, the ideal surface roughness (peak-to-valley height) produced on the components will increase by a factor of

Question 5:A 60 deg symmetrical V tool is used in shaping at workpiece with a depth of cut of 0.1 mm and feed of 0.1 mm/stroke. The theoretical peak to valley height, in mm, of the surface produced is 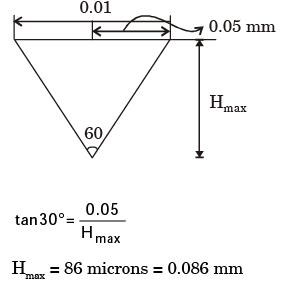 Question 6:The material most commonly used for manufacturing of machine tool beds is.

Gray Cast Iron because of its damping nature and characteristic to absorb shock.

Question 7:When the depth of cut in increased, the specific cutting energy

Question 8:In HSS tool materials the element tungsten can be completely replaced, without changing the material property by

Question 9:Hot hardness in an essential property for

Hot Hardness is the property of tool material to withstand at higher temperature with hardness.

Question 10:The heat generated in metal cutting is dissipated in different proportions into environment, tool, chip and workpiece. The correct order of this proportion in decreasing magnitude is (no cutting fluid is used)

Question 12:Only negative rake angles are used with the following tool material

Carbide tool are ceramics, which are having low toughness. So negative rakes angles are used.

Question 13:The base of a brass bracket has to be rough ground to remove the unevenness. The 4 wheels available in the store. The appropriate wheel is

Question 14:A milling cutter having 8 teeth is rotating at 100 rpm. The workpiece feed is set at 40 mm/ min the feed per tooth is

Question 15:The diameter and rotational speed of a job are 100 m and 500 rpm respectively. The high spots (chatter marks) are found at a spacing of 30 deg on the job surface. The chatter frequency is

Chatter in every 30° .
So 12 chatter mark in one revolution.

Question 16:Assertion (A): A diamond tool is used for USM of glass workpiece.
Reason (R): Diamond is harder than glass

Soft tool material must be used in order to avoid tool wear.

Question 17:In orthogonal turning of a cylindrical tube of wall thickness 5 mm, the axial and the tangential cutting forces were measured at 1259 N and 1601 N, respectively. The measured chip thickness after machining was found to be 0.3 mm. The rake angle was 10° and the axial feed was 100 mm/min. The rotational speed of the spindle was 1000 rpm. Assuming the material to be perfectly plastic and merchant’s first solution, the shear strength of the martial is closest to 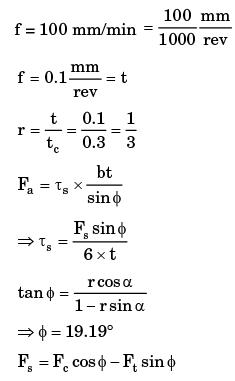 Question 18:The main cutting force acting on a tool during the turning (orthogonal cutting) operation of a metal is 400 N. The turning was performed using 2 mm depth of cut and 0.1 mm/rev feed rate.
The specific cutting pressure (in N/mm2) is

Question 19:Minimum shear-strain in orthogonal turning with a cutting tool of zero rake angle is Question 20:Friction at the tool-chip interface can be reduced by

By increasing the cutting speed, heat dissipation is increased so maximum temperature is decreased. Hence coefficient of friction is decreased.

Question 21:During orthogonal cutting of MS with a 10 deg rake angle tool, the chip thickness ratio was obtained as 0.4. The shear angle (in degrees) evaluated from this data is

Question 22:A built up edge is formed while machining

BUE is formed while machining ductile materials at low speed.

Question 23:In orthogonal machining operation, the chip thickness and the uncut chip thickness are equal to 0.45 mm. If the tool rake and is 0 deg. The shear plane angle is 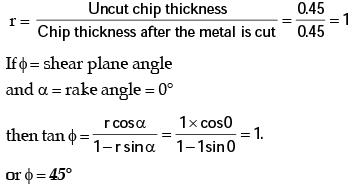 Question 24:What is the approximate % change in the life, f, of the tool with zero rake angle used in orthogonal cutting when its clearance angle, α, is changed from 10 to 7 deg?

(Hint : Flank wear rate is proportional to cot a)

Wear rate is proportional to tan y, i.e.
Wear rate ∝ tan y
Where, y  = Clearance angle
When clearance angle is decreased from 10° to 7°, then

Question 25:A cutting tool has a nose radius of 1.8 mm the feed rate for a theoretical surface roughness of Rt = 5 microns is

Question 26:In a typical metal cutting operation, using a cutting tool a positive rake a = 10°, it is as observed that the shear angle was 20°. The friction angle is

Question 28:Most of the metal cutting heat goes into the

Chip takes away heat from the working zone otherwise tool life and work piece surface finish would get spoiled.

Question 29:Crater wear always starts at some distance from the tool tip because at that point

Maximum temperature at the chip tool interface is 2 – 3 mm away from cutting edge because shank provides rapid heat dissipation just below the cutting edge.

Question 30:The size of BUE in metal cutting increases with